'The 2019 election could well become a referendum on Narendra Damodardas Modi, in which case the BJP could prove all its critics wrong,' notes T C A Srinivasa-Raghavan.
Illustration: Uttam Ghosh/Rediff.com 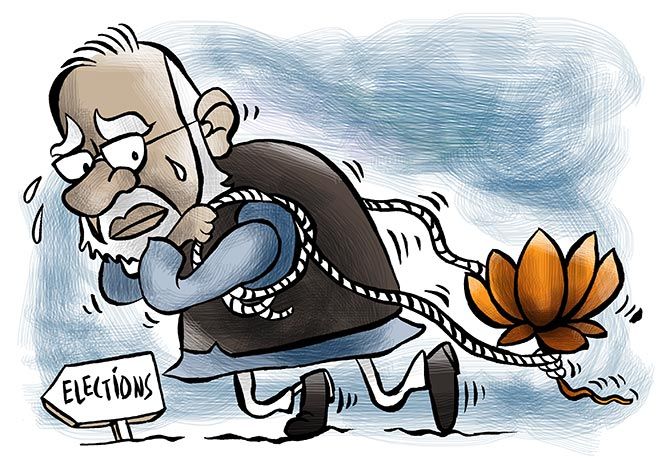 A couple of weeks ago, a very senior member of the Congress publicly said the BJP would lose 135 seats in the 2019 general election.

I thought this was a very precise number, based possibly on some internal estimates of the party.

He did not, however, say how many the Congress would win.

Meanwhile, the Congress itself does not believe it will get more than 125 seats, which is around three times what it won in 2014.

Less hopeful and more realistic estimates place its tally at around 100.

That will be enough for it to cry victory and hail Rahul Gandhi as a champion.

If we take the most optimistic estimates of the Congress -- BJP 133, Congress 125 -- who will the President invite to form the next government? This question has only one answer.

Then, whoever the prime minister is, we will have to see if he gets 1996'd.

Remember how Atal Bihari Vajpayee was unseated after just 13 days in office? That too could happen if the BJP loses more than 100 seats.

Also if, as seems more likely, the BJP and the Congress between them manage to win only around 280 seats, the rest of the parties will account for the remaining 264 seats.

So regardless of who leads the next government, we are going to have a weak or a very weak government after five years of a very strong one.

For this not to happen, the party that leads the next government will have to win at least 210 seats because it is only then that its foundational weakness diminishes sufficiently.

Each of these governments was hostage to regional parties.

But it squandered the opportunity.

Politics in India is about two things only -- 90 per cent of it is about social policies and only 10 per cent is about economic policies.

It is also true that for their own reasons both the BJP and the Congress have avoided using caste as their main driver.

This is perhaps the only good thing they have in common.

On bad things they are peas of a pod.

Take out the family from the Congress and the RSS from the BJP and the two could unite.

Thus, after 2004, the Congress focused on community -- recall the 2015 A K Antony report, which said it had bent too far in favour of Muslims -- and neglected inflation and caste.

The BJP, on the other hand, has always focused on inflation and community while neglecting caste.

The result has been a walkover for the caste-based parties.

These could well account for around 50 per cent of the seats in the next Lok Sabha, which is likely to be the real bad news of the 2019 election.

What we should expect

Experience since 1989 shows that whenever the central government is highly dependent on caste-based parties, national governance goes for a toss because the domestic agenda is driven by very narrow issues.

But if you speak to its functionaries, they tell you it is expecting to keep its losses down to just 50 seats by making up in states where it had not done well before.

But that may well turn out to be just a fond hope.

There is finally the Modi factor, down perhaps but not out.

In that sense, the 2019 election could well become a referendum on Narendra Damodardas Modi, in which case the BJP could prove all its critics wrong.