‘We have to stay one step ahead of Pakistan.’ IMAGE: The Indian national flag flies alone atop the civil secretariat in Srinagar as the Jammu and Kashmir flag was brought down on August 25, 2019, following the abrogation of Article 370. Photograph: S Irfan/PTI Photo

‘The thought that Kashmir has a separate flag, separate identity led to the instinct of separatism in their minds. Separatism has resulted in terrorism," says Lieutenant General D B Shekatkar [retd], chairman of the Committee of Experts constituted by the government to recommend measures to enhance combat capability and rebalance defence expenditure of the armed forces.

The committee submitted its report in December 2016. One of its recommendations was the appointment of the post of chief of defence staff that was announced by the prime minister on Independence Day.

Having served the Indian Army for four decades, a majority of those years in the Northeast and Kashmir, General Shekatkar was instrumental in the surrender of a record 1,267 terrorists in Kashmir.

A prominent speaker on defence affairs and author of several books, he spoke to Rediff.com’s Archana Masih in a two-part interview.

What is the price India has had to pay for having had Article 370 for nearly seven decades?

Not only India but the people of Kashmir have paid a heavy price for Article 370.

The people of Kashmir have been bluffed and denied the correct interpretation of the Article.

Secondly, no outside investment has been possible and there is a lack of job opportunities for the young generation.

This resulted in young people getting influenced by hostile propaganda of the Hurriyat and anti-nationals. For Rs 200-300, the youth was ready to pelt stones and gradually got criminalised.

Now they have gone so far that it is difficult for them to return. The youth of Kashmir have paid the biggest price for having had Article 370 for so many years.

How have the Kashmiri youth paid a price for this?

Can we name five good educational institutions that have opened campuses in J&K? If the answer is no -- then have not the children of J&K been deprived that opportunity?

Those who have done well in competitive examinations, many of them have studied outside the Valley -- but not in the 5-6 affected districts of Kashmir. If that being so, has it not affected the future generations?

When it comes to applying for a passport, seeking employment they write their nationality as ‘Indian’ but when it comes to taking advantage they say they are ‘Kashmiri first’. When the idea that they are Kashmiri first gets into their minds, it is difficult to remove that concept.

If they continue to remain Kashmiri first when will they become Indians?

If they go abroad for a job, like many children of Kashmiri politicians have, will they say that they are Kashmiri first and then Indian? If they have not said so, then is it not doublespeak?

In these 70 years, seven generations have been destroyed. School children have been brainwashed. They have been indoctrinated and it is difficult to change their mindset at age 18-19.

How will you change their lives? You have made them human robots, whose minds have been influenced to remain fundamentalist.

You have also said that the Article 370 was a reason for terrorism in Kashmir.

The youth, because of the reasons above, became easy targets for the terrorists and fundamentalists. By paying them Rs 3,000 a month, they converted them into terrorists -- once you commit one crime and your name goes into the register you can never come out, the stigma will remain.

When you apply for a job and an investigation is done, the police report will say that you were booked for a crime.

Secondly, when outsiders were not allowed to buy land in Kashmir, it was not possible to open news hotels, resorts or small scale industry. It was confined to a few people and this was another reason for economic backwardness.

The thought that Kashmir has a separate flag, separate identity led to the instinct of separatism in their minds. Separatism has resulted in terrorism.

They do not realise the damage that has been done to them because of Article 370.

What are the challenges that lie ahead for the Government of India and what is the way forward?

The challenges that lie ahead is to convince the people of Kashmir that this measure is for the better. Generation after generation has been fed on lies and it will take time to change the DNA of their thinking.

It needs patience and a tremendous amount of effort.

Good academic institutions must open there. Measures need to be taken to gainfully employ young people. Those outside the state who have the capability should invest. Unless they are assured that their investment is safe, will they take a chance? Will banks give loans to open new businesses?

Industry and employment generating ventures should be undertaken in areas like floriculture, carpet weaving, horticulture, embroidery, organic farming because big industry will ruin the environment.

Even if you prepare the land for other industry it will take time and till that time the government should ensure alternative means of sustenance to convince people.

The investor’s summit is going to take place in October, but by the time the results of these are seen on the ground, it may take 3-4 years.

In these 3-4 years, Pakistan, the Hurriyat Conference, politicians who have lost their jobs will not sit idle. They will tell the people, see, they have not delivered what they promised.

Now Pakistan knows its game is up. Are they going to sit quiet? They will think of another mechanism.

The Pakistan Army chief General Bajwa has already said that they will go to any extent for Kashmir.

We have to stay one step ahead of them. Laddakh has been carved as a Union territory and the Chinese are feeling threatened.

They are also threatened in PoK because of the China-PoK economic corridor. They probably fear that India may exert pressure. The people of Baltistan, Gilgit want freedom. There is unrest in PoK -- all these factors will bring Pakistan and China closer together.

While it was difficult to handle one enemy, now we will have to handle an enemy and an adversary, and that can be a deadly combination. We don’t call the Chinese as our ‘enemy’ but certainly they are our ‘adversary’.

If we go by the history and DNA of Pakistan, they will not hesitate to give PoK to China like they have given 7,000 sq km to China in 1962. For a few billion dollars, Pakistan can do anything. 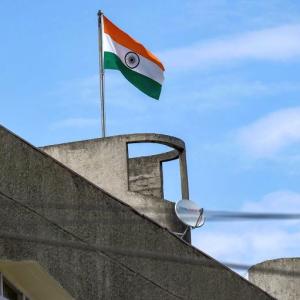