Why playing the Tibet card may backfire on India

'Given Chinese sensitivity to anything to do with Tibet -- and the fact that in the 1950s it was the Tibet issue which led to the deterioration of India-China relations and the border war in 1962 -- India should be particularly careful in not triggering a Chinese reaction which it may not be able to handle,' says former foreign secretary Shyam Saran. 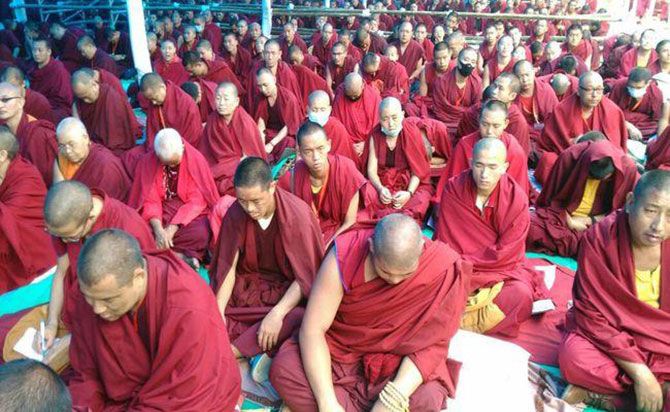 India-China relations appear to be sliding towards sharper confrontation as each country reacts to moves by the other, moves which are perceived to be hostile.

We are witnessing the beginning of a cumulative action-reaction process, which could become self-reinforcing, taking the two countries in a direction neither may wish to traverse and more importantly, which is in neither country's interest.

China has repeatedly maintained its 'technical hold' on the listing of Masood Azhar, the chief of the Pakistan-based Jaish-e-Mohammad (JuD), as a terrorist at the UN.

India has accused China of indulging in double standards and flouting its own professed opposition to international terrorism.

The two countries have repeatedly stated their convergent interest in combating terrorism so it is not unreasonable for India to regard Chinese stance on the JuD as inexplicable.

China has also continued to oppose India's membership of the Nuclear Suppliers' Group on grounds that this would undermine the international non-proliferation regime.

But in private China has made it known that it could accept both India and Pakistan becoming members of the NSG simultaneously.

Thus, the common factor in both cases is Pakistan.

India has reacted by ratcheting up the pressure on both counts, forcing China to take public positions in support of Pakistan which then heightens Indian perceptions of Chinese hostility.

Having taken such positions, China finds it difficult to walk back to a more nuanced position as was the case in the past.

India's recent Agni-IV and Agni-V inter-continental ballistic missile (ICBM) tests were presented in the Indian media -- as in the past -- as targeting China though the official announcement was as always circumspect, reiterating that the capability was not directed against any specific country.

In a departure from the past, China chose to react officially to the tests by declaring them to be in violation of UN Security Council resolution 1172 of June 6, 2008.

This resolution, under Chapter VI (hence non-binding), was passed in the aftermath of the series of nuclear weapon tests carried out by India and Pakistan in 1998.

The Chinese official spokesman chose to explicitly describe the Agni tests as violating the above resolution stating that 'the UN Security Council has explicit regulations on whether India can develop ballistic missiles capable of carrying nuclear weapons.'

It should be noted that China has never acknowledged India as a Nuclear Weapon State and when pressed in various interactions, have often cited this resolution.

Chinese media has gone a step further and threatened that if Western powers 'accept India as a nuclear country and are indifferent to the nuclear race between India and Pakistan, China will not stand out and stick to those nuclear rules as necessary.'

There is an implicit threat in this of China reinforcing Pakistan's nuclear and missile capability to balance India.

China has been doing this in any case, but what is different this time round is the public and threatening manner in which it is being articulated.

In the past China would not acknowledge this support to Pakistan and claim that it was only involved in peaceful nuclear cooperation and 'normal' defence cooperation with that country.

On the Indian side, there is a clear signaling of intent to rekindle the Tibet issue.

The invitation to His Holiness the Dalai Lama to Rashtrapati Bhavan, for a Nobel Laureates conference, was a visible departure from a previous policy not associating the government with the Tibetan leader's activities in India.

The Karmapa has also become more publicly active and this, too, must be due to a policy shift.

Clearly the Indian side is indulging in its own ratcheting up of pressure on China.

If such gestures towards the Tibetan religious leaders continue, there is little doubt that China will react and seek to 'punish' India in some fashion.

India may wave a Tibetan card to cause discomfiture to the Chinese, but this will be more an irritant rather than a serious threat to China.

On the other hand, given Chinese sensitivity to anything to do with Tibet and the fact that in the 1950s it was the Tibet issue which led to the deterioration of India-China relations and the border war in 1962, India should be particularly careful in not triggering a Chinese reaction which it may not be able to handle.

Quite the contrary, the two countries need to engage with each other to find ways in which to manage the Tibet issue and prevent it from becoming, once again, source of escalating tensions.

India's efforts should be towards encouraging a reconciliation between the Dalai Lama and the Chinese rather than hoping to exploit the differences between them.

Both countries need to step back and orient their bilateral engagement towards defusing current tensions rather than expanding them.

China appears to view India through the prism of its increasing rivalry with the US much as, in the past, it saw India as an ally of a hostile Soviet Union.

There is also the element of hubris, the constant reference to China's GDP being five times that of India, and hence, India accepting its place in the junior league.

China appears to forget that when its own GDP was a fraction of that of the US, it was not willing to accept a junior status; so why should India?

On the part of India, one would hope that we avoid the urge to react to Chinese provocative behaviour with matching hostility.

We should not get into an escalatory dynamic which neither country is able to control and whose consequences we are unable to manage.

Nor should we allow a public opinion environment to take hold which then begins to dictate leadership decisions.

India-China relations are adversarial and will remain so in the foreseeable future.

It is in the interest of both countries not to let the adversarial descend into avoidable confrontation.