News
Business
Movies
Sports
Cricket
Get Ahead
Money Tips
Shopping
Sign in  |  Create a Rediffmail account
Rediff.com  » News » Why Modi-Shah must worry about the next election

'What has taken the wind out of its sails is the government's own expectation management and its inability to strategise on delivery,' says Vikram Johri.
Illustration: Uttam Ghosh/Rediff.com 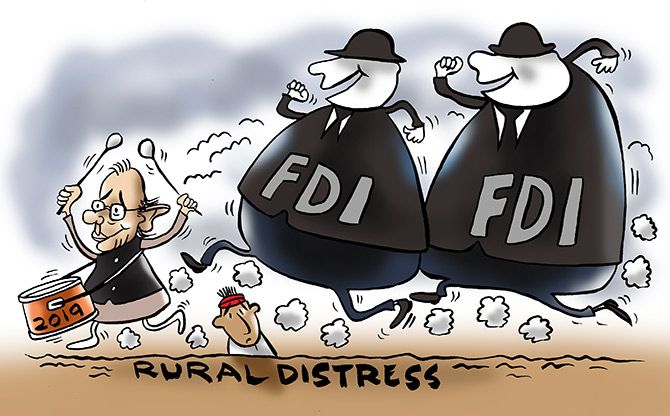 With a number of state elections scheduled this year and the big one in the first half of the next, 2018 will see much political activity, not to mention mudslinging, on the ground.

To be sure, since the Bharatiya Janata Party came to power in 2014, the sense that we are in perpetual election mode has not abated, but the feeling is likely to be heightened in 2018.

Prime Minister Narendra D Modi and BJP President Amit A Shah can rightly claim credit for their recent victories in Gujarat and Himachal, even if the scale of the victory in the western state was far below expectation.

Before the election, there was much talk of traders, a substantial chunk of Gujarat's electorate, punishing the BJP for implementing GST, but ultimately this did not come to pass.

This ability of the government to prove naysayers wrong was witnessed earlier in the case of Uttar Pradesh, where the BJP romped home in the backdrop of demonetisation.

That victory was explained as a result of Modi's deft political handling of the fallout of the note ban.

Even with GST, the government has responded to complaints with alacrity, which may have played some part in defusing tensions.

Caste violence in Maharashtra and the rise of leaders like Jignesh Mevani will challenge the BJP's electoral hegemony.

Rural distress, which played some part in the less-than-spectacular victory for the party in Gujarat, is certain to be a hot-button issue in the states going to polls this year, such as Karnataka and Madhya Pradesh.

On its part, the government seems more eager to address systemic issues that plague industry and services when compared to agriculture.

The opening up of FDI limits in more sectors is a pointer. It is possible -- and one hopes this is the case -- that the government will use the Budget to come up with a substantial plan for the rural economy, including a commitment to infrastructure and greater support to farmers.

One thing that has worked for this government is its willingness to respond to criticism, at least in the economic sphere.

When the prime minister was criticised for running a 'suit-boot ki sarkar' by Rahul Gandhi in 2015, the government quickly changed tack.

The prime minister gave up his foreign sojourns, and subsequent government pronouncements, especially the ability to sell demonetisation as a win for the poor, put paid to Gandhi's barb.

Yet, the aura of invincibility that has surrounded the government since 2014 has broken.

Some analysts may lay this at the door of the government's cultural agenda.

The government, as per this accusation, does not partake in any extremism itself but does not rein in the extremists within the larger ideological fold. But this criticism is largely unjustified.

What has taken the wind out of its sails is the government's own expectation management and its inability to strategise on delivery.

Part of Modi's appeal lies in his ability to always have a plan, something that Indians have come to identify him with, even if this alacrity on his behalf can sometimes cause them undue stress.

The prime minister, for example, is feted for staking personal prestige on projects that are not just long-term but call for the kind of behaviour change that can take a generation.

His call for a Swachch nation by Mahatma Gandhi's 150th birth anniversary is one such.

It is welcome to the extent that it entails building more toilets, but the government has evangelised the Swachch Bharat Mission as a transformative national project that will start a sanitation revolution in the country. Evidence for this grand claim is slim.

It is into the space opened up by this dichotomy that Rahul Gandhi has stepped.

Gandhi does not inspire confidence, but his questions for the government have begun sounding less like the insincere musings of a dynast than like the worthy claims of an opponent.

He will only build on this momentum in the coming year.

All that said, though, the Modi-Shah combine is formidable enough to continue to call the shots on the national stage.

If they fear a dip in popularity as 2019 approaches, do not be surprised if they come up with a 'lite' version of Daemon, a disruptive experiment that they will know exactly how to market to a willing electorate.

Also: DON'T MISS reading the features in the RELATED LINKS alongside 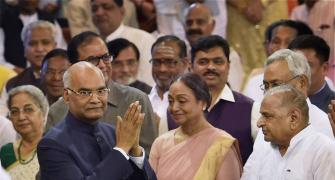 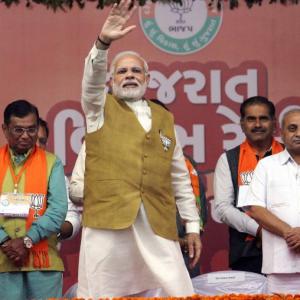