Modi wants a 'change in the Indian citizen's character.'
'An internal transformation.'
'This is reformation of the sort that is usually done by spiritual and religious leaders.'
'It is not in the domain of popular politics,' points out Aakar Patel. 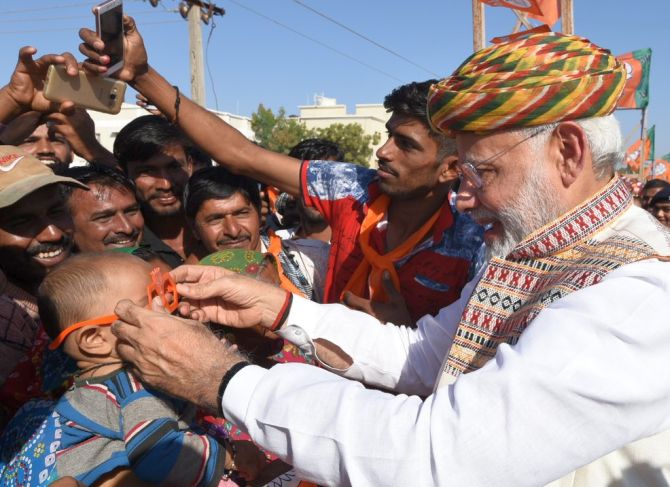 'You are a revolutionary leader and you are revolutionising India. You are catapulting this magnificent State into the future,' Israel's Benyamin Netanyahu said to India's Narendra Modi last week.

What could he possibly mean? My dictionary defines revolution as 'involving or causing a complete or dramatic change'.

Usually this change the revolutionary seeks is a sort of insurrection against the established order, particularly the State.

Since Netanyahu is calling the India State magnificient (it would be fascinating to know why he thinks it is), it is safe to assume that he's not referring to Modi's attempts to overthrow that order.

So what could he possibly be reaching for? I don't really know, and don't want to speculate.

For a moment let us set aside the fact that Netanyahu was here to sell arms to a customer susceptible to flattery.

However, it is very true that in one way, Modi is seeking to bring about revolutionary change in the established order.

What is this change? I would say it is reform, but not in the way the word is generally used.

Let me illustrate this by looking at one of Modi's signature initiatives: The Swachh Bharat Abhiyan. Readers will remember how it was launched: With the prime minister taking a broom and cleaning public spaces, and encouraging others to do the same and tweet about it.

His Web site explained the purpose of the Swachh Bharat Abhiyan: 'A clean India would be the best tribute India could pay to Mahatma Gandhi on his 150 birth anniversary in 2019.'

'While leading the mass movement for cleanliness, the Prime Minister exhorted people to fulfill Mahatma Gandhi's dream of a clean and hygienic India.'

'Shri Narendra Modi himself initiated the cleanliness drive at Mandir Marg Police Station. Picking up the broom to clean the dirt, making Swachh Bharat Abhiyan a mass movement across the nation, the Prime Minister said people should neither litter, nor let others litter.'

The words 'toilet' and 'sanitation' appear once, in the line that Modi has 'simultaneously addressed the health problems that roughly half of the Indians families have to deal with due to lack of proper toilets in their homes.'

This is almost an afterthought, perhaps because it was an extension of earlier programmes and therefore uninteresting to Modi.

Littering is an eyesore and at the most an aesthetic irritant. It is not a national crisis like sanitation is (38% of our children are stunted at age 2, giving them no chance of a fulfilling intellectual and physical life).

But Modi's focus and his messaging was on littering, because what he was reaching for was a change in the individual Indian citizen's character, which he saw as needing behavioural change.

An internal transformation. This is reformation of the sort that is usually done by spiritual and religious leaders. It is not in the domain of popular politics.

One can similarly understand the motivation for eccentric actions like demonetisation through the same instinct of social reform.

Indians must be weaned off black money and the way to do this is by forcing behavioural change and taking away their cash.

Modi must act and so he will force (compel) people to do the right thing, or that which he considers right.

This is the reform of the father figure, which in many ways Modi has become, given the nature of his popularity and where it springs from.

'There are several examples which show how our society is undergoing a major transformation. Initiatives like taking yoga to the masses, banning the use of red beacons to end VIP culture, special schemes for divyangs and sensitising people to their needs,' Bhandarkar wrote, 'ending the formality of getting forms/certificates attested by gazetted officers, exhorting people to prepare their own manure through composting -- these may look like small initiatives but their impact is massive.'

Whether this is what the prime minister of India should concentrate on is not something I want to look at here. The point is that this societal change is what he is drawn to.

Sometimes he recognises that he may have approached the issue wrongly or hastily. Today the Swachh Bharat Web sites, including the one for urban centres, list the toilet and sanitation numbers front and centre and there is little if anything about littering.

In his reply to Netanyahu's praise, Modi said, 'I have a reputation for being impatient to get results and so do you.'

We should expect that his attempts to reform us will continue.