News
Business
Movies
Sports
Cricket
Get Ahead
Money Tips
Shopping
Sign in  |  Create a Rediffmail account
Rediff.com  » News » Why Modi is not good at implementation

He is not good at thinking through laws and policies. His lockdown produced chaos and misery and didn't stop Covid.
His GST finished off thousands of companies and reduced the amount of tax government collects to such an extent that he cannot pay state governments any more, observes Aakar Patel. 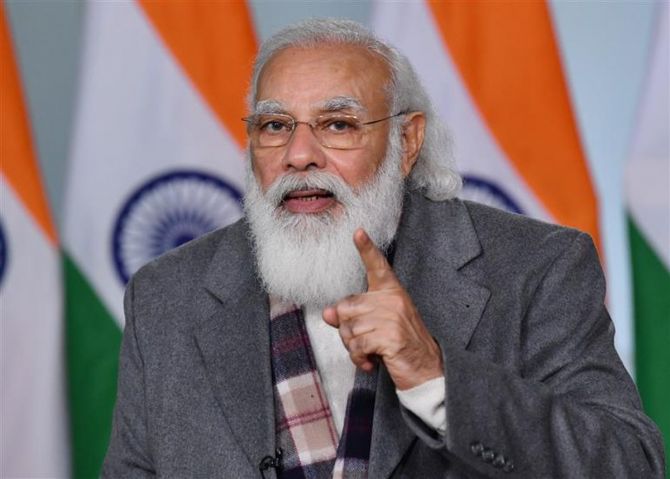 The prime minister says he wants farmers to double their income but does not want the government to do it.

He believes that his laws favouring corporates will expand the market for farmers but does not explain how this will happen.

Corporates are not going to make Indians eat more food than they already are at the moment.

India is already a surplus producer of grain and milk.

The problem is that we do not consume enough, because most Indians are poor and cannot afford more and better food.

It is the Union government that must do that.

But Narendra Modi has cut the amount of money that the poor get as food subsidy.

If half of India's poor gets this, it is less than Rs 150 per month.

How will farmers' incomes double if the government does not feed our poor by purchasing more produce? So much for the local market.

Corporates are not in charge of how much of its agriculture and dairy India can export.

It is the government that will have to force other nations to open their markets to our farmers.

But under Modi India's agricultural exports have actually declined.

All nations seek to protect their farming communities and so agricultural exports are the toughest thing in trade negotiations but there is a way out.

Vietnam has shown it by consistently increasing its export of value added goods.

India has failed under Modi to do even what it was doing before.

Total agricultural trade around the world is over $2000 billion meaning that India has not only a tiny share of the market but a insignificant one.

This in turn means that there is great opportunity for India to grow.

However India, especially in the last seven years under Modi, has failed to create a market for its agricultural goods.

We have no free trade agreements under which our farmers can send their output and the existing ones, such as with Korea and Japan do not help them expand their market.

Modi is not good at implementation.

He is not good at thinking through laws and policies.

His lockdown produced chaos and misery and didn't stop Covid.

His GST finished off thousands of companies and reduced the amount of tax government collects to such an extent that he cannot pay state governments any more.

His demonetisation did not end black money, corruption or terrorism, but it wounded the economy so much that Indians were consuming and eating less in 2018 than they were in 2013, according to the government's own data.

This is the record of our fine leader.

Now he wants farmers to believe that his genius is sufficient for them to let go of their livelihoods and trust him.

He has offered no explanation or apology for putting hundreds of millions of Indians through extreme trauma because of his half-baked ideas and implementation before.

On what grounds does he assume that the farmers think he knows more about agriculture than they do? They are aware that there is neither a local market for their produce nor a foreign one because they have been producing this for generations.

The only way out for them and for India's poor is for the government to legally guarantee MSP for all crops.

To procure what is surplus (more than 80% of our farmers do not have any produce to sell at all, consuming all that they grow on their little patch), and to distribute it among the poor.

If Modi has the ability, which I doubt, to induce corporate India to invest heavily in food processing for export, this should be done before the mandis and MSP are dismantled as the farmers fear that they will be.

It is difficult to see how Modi's laws will come out of this without being savaged or repealed.

He has no defence of them other than to say that the farmers are being misled.

A cursory look at the farmers' charter of demands, and listening to any of the farmers being interviewed by media tells you that this is not the case.

They also know what is coming in case they do not act. This is why it is hard to see the farmers' movement either going away or ending soon. 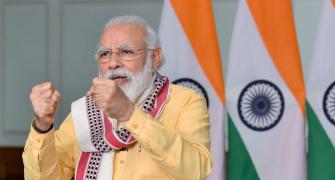 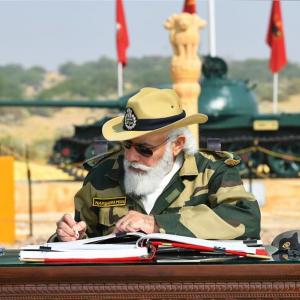