News
Business
Movies
Sports
Cricket
Get Ahead
Money Tips
Shopping
Sign in  |  Create a Rediffmail account
Rediff.com  » News » Why India must give its neighbours their due 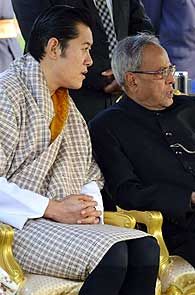 This quiet assertion of China has allowed various smaller countries of South Asia to play China off against India. Most states in the region now use the China card to balance against the predominance of India. Forced to exist between their two giant neighbours, the smaller states have responded with a careful balancing act, says Harsh V Pant.

It is a tribute to the ham-handed manner in which Indian foreign policy is managed that even India’s relations with Bhutan are now attracting undue attention. The withdrawal of subsidies to Bhutan on petroleum products in the midst of recent elections is merely a manifestation of how poorly conceived and executed India policies have become, completely disconnected from any strategic thinking.

Of course, now there is widespread hype in the Indian media that with the coming to power in Thimpu of the former opposition People's Democratic Party emphasising strong ties with India, all will be well once again. But if the Indian policy makers think things will be back to normal, they are mistaken. Trouble in Delhi-Bhutan ties is only beginning to emerge and this process will be accelerated by the onset of real democracy and competitive politics in the Himalayan kingdom. India will need to play its cards with great finesse if it wants to maintain its special relationship with Bhutan.

The King of Bhutan, Jigme Khesar Namgyal Wangchuk, was the chief guest earlier this year at the Republic Day celebrations in New Delhi eight years after his father graced the occasion. As it turned out, however, he was not the first choice of the Indian government. New Delhi wanted the Sultan of Oman to be the chief guest but such are the mysterious ways of the great Indian bureaucracy that even a routine invitation to the head of a state was goofed up.

Even though this was clearly a major debacle, New Delhi quickly tried to salvage this situation by turning to its old friend in Bhutan for damage control who agreed to act as a replacement. Though the Bhutanese King was received with due pomp and ceremony in New Delhi, the cavalier attitude of India towards its smaller neighbours did not go unnoticed.

Bhutan remains the only resolutely pro-India country in South Asia today. At a time when India is rapidly ceding strategic space to China in its vicinity, it should be cultivating its immediate neigbours with greater sensitivity. As it is Bhutan has signalled that it does not want to remain the only country in India’s neighbourhood without official ties with Beijing.

The previous Bhutanese Prime Minister Jigme Thinley made overtures to Beijing, meeting his Chinese counterpart on the sidelines of the United Nations Conference on Sustainable Development at Rio de Janeiro last year in an attempt to lobby for Bhutan’s candidacy for the non-permanent seat in the United Nations Security Council. He also reportedly raised the issue of establishing diplomatic ties between the two nations though this was later denied by Thimpu. China’s economic engagement with Bhutan is also likely to grow in the future especially as China’s infrastructure development leads to greater connectivities between the two states.

What might be most troubling for India is a boundary settlement between China and Bhutan. Besides India, Bhutan is the only county with a land border dispute with China today as the 470-kilometre long border between the two nations remains contentious. China’s slow encroachment into Bhutanese territory is also making Bhutan eager for an early boundary settlement. And if such a settlement allows China access to disputed areas in the Chumbi Valley, a tri-junction abutting Bhutan, Tibet and Sikkim, Indian security interests will suffer significantly as the Siliguri corridor connecting India to its northeast will come under direct Chinese threat.

In response India has indeed stepped up its own economic profile in Bhutan. India views Bhutan as a major source of hydropower in the coming years and is seeking greater access for its energy companies. India is hoping to import 10,000 MW hydropower from Bhutan by 2020 and is ramping up its economic aid to Thimpu. But the issue is larger than economic assistance and military security.

If New Delhi continues to treat its smaller neigbours as second class states who are only to be courted if the Chinese end up expanding their footprints, then sooner or later these smaller states will start treating India as a second rate power, lagging much behind China in their foreign policy priorities.

The ‘special’ relationship that New Delhi and Thimpu share will only hold water if both sides are equally interested in sustaining the relationship. Much like other smaller states in India’s neighbourhood, Bhutan would also like greater autonomy in its foreign and security policies. And with democracy taking roots in the country, India will be soon seen as a nosy external party interfering in Bhutan’s internal affairs. China will then emerge as an effective balancer against India’s overweening presence.

India cannot and should not hinder the enhancement of Sino-Bhutanese ties. Bhutan, the hermit kingdom of South Asia, is opening up to the world. Not only China but other powers too are seeking to engage Thimpu. A fully integrated Bhutan into the world community can only be a good thing for India.

China’s rising profile in South Asia is no news. What is significant is the diminishing role of India and the rapidity with which New Delhi has ceded strategic space to Beijing in its immediate vicinity.

This quiet assertion of China has allowed various smaller countries of South Asia to play China off against India. Most states in the region now use the China card to balance against the predominance of India. Forced to exist between their two giant neighbours, the smaller states have responded with a careful balancing act.

It would indeed be a huge failure of Indian diplomacy if, because of New Delhi’s inept handling, Bhutan too decides to follow the same path. For the time being, Bhutanese voters have underscored once again their trust in India But New Delhi should not be taking it for granted. 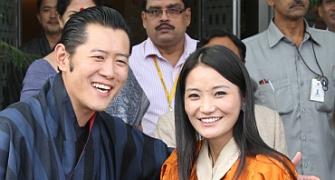 Pix: What's Bhutan's newly-wed royal couple up to in India 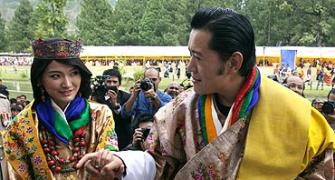 I am a romantic, says Bhutan's newly-wed king 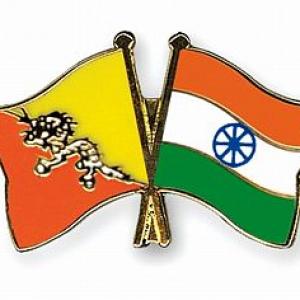 India breathes sigh of relief as Bhutan returns to the 'fold'