'It can't be a coincidence that he and his family, uncles and all, vanished from India only days before the scam was discovered.'
'Surely someone senior in the government alerted him that the scandal was about to break,' says Aakar Patel. 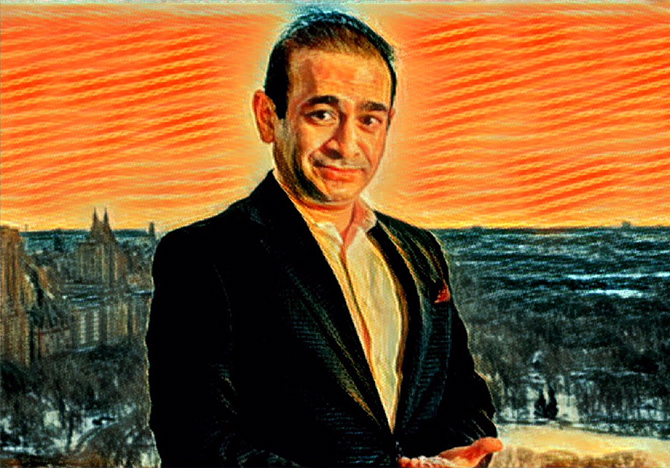 Nirav Modi joins a list of smart young Gujarati men -- including Harshad Mehta, Hiten Dalal, Jatin Mehta and Ketan Parekh -- who have in the last few years easily taken thousands of crores each from taxpayers.

I say taxpayers because though the money vanished from public sector banks, it is the citizen's money that is being stolen.

Punjab National Bank has said it will raise about Rs 5,500 crore from the government by selling it shares at Rs 163. The market price of the share is Rs 113 and falling.

And so you and I are paying a premium of Rs 50 per share for investing in an incompetent bank that has squandered our money.

We are being assured that once this extra money is pumped in all will be fine. This is, of course, bogus and a repeat of what has happened to us in the same way several times before is bound to happen again.

What we know as the stock market scam was actually a banking fraud just like Nirav Modi's and Jatin Mehta's.

The journalists Debashish Basu and Sucheta Dalal wrote a book, The Scam: From Harshad Mehta to Ketan Parekh. They revised it with the title 'Also includes JPC fiasco and Global Trust Bank scam'. I fear they will have to keep revising it because this wretched nation seems to have no shortage of huge banking frauds.

Of the Harshad Mehta matter, Basu and Dalal write that 'the scam was so gigantic that it was easy to lose perspective. Larger than the health budget, larger than the education budget, it made millions of rupees look like loose change.'

'As the stock prices started crashing all over the country, following the most explosive and absurd rise over the previous six months, the scam -- fifty times the size of Bofors -- invaded middle-class homes like a whirlwind.'

Mehta bought securities for State Bank of India but did not deliver them, instead using the money to speculate.

Basu and Dalal write that 'in this scheme, he was aided by the blue-blooded ANZ Grindlays Bank and the National Housing Bank, the fully-owned subsidiary of the Reserve Bank of India. Both freely credited cheques to Harshad's account.'

'Harshad also managed to operate SBI's account maintained with RBI as his own, putting through fictitious purchases and sales through that account and having his own bank account credited or debited corresponding to such buying/selling.'

The infection, as is absolutely clear, is total.

It is absurd to pin it on one or two employees of any bank. The one cure and the only cure is to ensure that there is rule of law. Not in any specific case, but in all cases from traffic violations to murder.

The criminal justice system must be functional. The State must respect and follow due process -- always and without exception -- even when it may appear to be going soft on the accused.

This is very, very, hard work, but there is no other cure.

Is this the cure being administered by the government when we look at recent high profile cases and at events around us? I will leave it for the reader to judge.

Prime Minister Narendra D Modi has still to address the Nirav Modi matter. Without naming him or the bank, Modi said on Friday, 'I want to appeal to those who have been given the task of framing rules and maintaining ethics in financial institutions to perform their duty with full faith, particularly those who have been given the responsibility of monitoring and supervision.'

The prime minister said 'We will continue to take action,' and that the inappropriate use of the people's money would not be accepted by the new system created by the government.

Of course, others have said this same thing before when the money was lost under them and the scams have continued.

As a nation and a culture we seem to have no immunity at all against the smooth talking Gujarati youth who easily can take our banking system for a ride.

Harshad Mehta called his investment philosophy 'replacement cost theory'. The idea was to value an established company's shares not based on its current earnings, but what it would require to replace it if it did not exist.

Only in his early 30s when he was named Big Bull, he was celebrated and lionised as a genius.

We are told Nirav Modi had begun milking Punjab National Bank seven years ago. It cannot be a coincidence that he and his family, uncles and all, vanished from India only days before the scam was discovered.

Surely someone senior in the government alerted him that the scandal was about to break.

In that same speech referred to above, Modi appealed to those entrusted with the task of monitoring and vigilance to do their job with full diligence.

'I wish to make it clear that this government will take stringent action against financial irregularities. The system will not accept irregular accumulation of public money. This is the basic mantra of New Economy-New Rule.'

Whether or not one believes these words given the track record, we should all hope that our country develops greater immunity to the plunder of public funds.

An end to the sequence of Mehta, Dalal, Parekh and Modi would be a relief.

Meanwhile it would be a blessing on all of us if the PM could stop at least this aspect of the Gujarat Model from visiting the rest of the country again.