News
Business
Movies
Sports
Cricket
Get Ahead
Money Tips
Shopping
Sign in  |  Create a Rediffmail account
Rediff.com  » News » What Kashmir and Tamil Nadu have in common

What Kashmir and Tamil Nadu have in common

'In both places the minority was disproportionately powerful.'
'Few people acknowledge it but at its core the Tamil Nadu problem between the Brahmins and the rest was one of power.'
'In Kashmir the Hindus held most of the land and the accompanying political power, while the Muslims were the peasants and powerless,' notes T C A Srinivasa Raghavan. 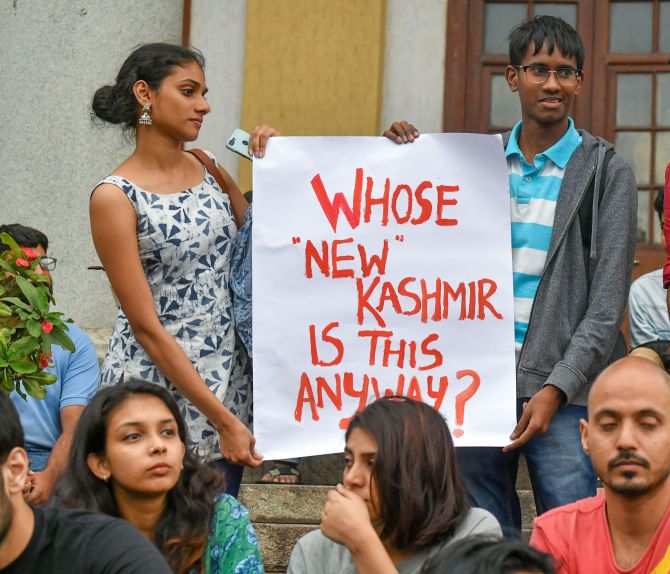 IMAGE: Activists in Bengaluru protest against the government's move to revoke Article 370 in Jammu and Kashmir. Photograph: Shailendra Bhojak/PTI Photo

The government says Kashmir is now open to tourists. That's good. After all, it's now more than two months since the Modi government further rendered the provisions of Article 370 ineffective and, in a Colin Powellesque move of 'shock and awe' turned the state of Jammu and Kashmir into a Union territory.

Kashmiri Muslims have been outraged but silenced.

Pakistan has been mewling like a cat stranded on a tree.

China, the global exemplar of human rights, has been growling to pacify Pakistan.

Indian liberals who have been taken in by the hearts and minds arguments have been weeping gently, mourning for the lost liberalism of Article 370.

All this is in accordance with the script.

What is not, however, is the response of the Kashmiri Hindus, who were so mercilessly kicked out of the Valley in 1990. They had been left to fend for themselves by successive central governments, which thought this was nasty but quite ok.

I have a lot of Kashmiri Hindu friends and my brother's wife is a Kashmiri Hindu. They are very happy, but have also been stressing the need to preserve the Kashmiri identity, whatever it is. That is their right and it should not cause offence.

But what I cannot understand is why they think their identity is somehow more important than any other Indian identity, or superior.

What's so special about it?

Two questions arise from this. One, why has this belief persisted and strengthened over 70 years when almost all other non-tribal regional identities have receded; and two, should these self-important notions be ignored just as the rest of regional identities were, or be pandered to?

What has been the Kashmiri contribution to India after 1947?

The answer to the first question is clear. Separateness and identity got fused because of Article 370, on which Jawaharlal Nehru had insisted.

But the answer to the second question is unclear because of a very simple thing: While Nehru's solution was to a political problem, the identity issue is a sociological one. And sociology is not uni-dimensional. It is very hard to tackle.

There is the added complication: The Kashmiri Hindu identity was always quite distinct from the Kashmiri Muslim one. It has become even more so now.

This is the problem that needs resolving.

The experience of Tamil Nadu offers some hints. It took half a century there -- from 1918, when the Dravidian Justice Party was formed, to 1967, when its successor, the DMK, came to power -- for it to be resolved. It consisted of a peaceful acquisition of power by the majority.

What Tamil Nadu and Kashmir have in common is that in both places the minority was disproportionately powerful. Few people acknowledge it but at its core the Tamil Nadu problem between the Brahmins and the rest was one of power.

In Kashmir the Hindus held most of the land and the accompanying political power, while the Muslims were the peasants and powerless. In 1935 it was the Hindus who persuaded the Maharaja to exclude all non-Kashmiris from owning land in Kashmir. That law eventually came back to bite them in their backside.

In Tamil Nadu, in contrast, the Brahmins were insignificant as landlords. But they held social and administrative power. Their power was based on their ability to exclude. It was, if you like, the club approach to power.

In Tamil Nadu the minority has now been pretty much evicted because the Brahmins, despite being a minority, constituting no more than 4% to 5% of the population, were the ones who were socially powerful. Today they are less than 2%. The liberals don't seem to mind very much.

This eviction was achieved by economic and administrative means comprising Constitutionally and judicially mandated reservations in jobs and education. In Kashmir, however, the eviction was violent.

Today the Brahmins and the others of Tamil Nadu have found a modus vivendi where both fiercely defend their Tamil identities -- together. But barring some nut cases, they have no love for separateness.

In Kashmir it is the opposite. Separateness fully defines the Kashmiri Muslim. There is no place for the Hindus or even other Indians.

It would be highly optimistic to think the Tamil solution can be repeated in Kashmir. It is too late for that now because Article 370 in its coming, living, and dying, too, has rendered the valley a mental wasteland where a Kashmiri Muslim has no clue what he or she wants: To become a Pakistani, to remain Indian, or become independent.

That's why they are better off as a Union territory until they sort themselves out. 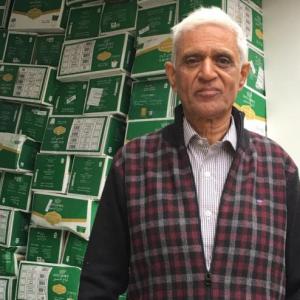