The deaths in the drone strikes of many Al Qaeda leaders such as its No 3 Sai'd al-Masri and  Saleh-al-Somali from Somalia have not weakened the capability of Al Qaeda to plan and mount terrorist strikes, writes B Raman.

Seventy-four persons, 60 of them reportedly Ugandan nationals, were killed and 70 others injured on July 11, in two explosions suspected to have been carried out by Al-Shabaab, the Somali wing of Al Qaeda, at a local rugby club and an Ethiopian restaurant at Kampala, the Ugandan capital. The explosions took place near large numbers of football enthusiasts watching on TV the final match of the World Cup football in South Africa between Spain and Holland.

Citing local officials, the British Broadcasting Corporation has stated that among the casualties were Ethiopian, Eritrean, Indian and Congolese nationals. It has not indicated how many Indian nationals were involved and whether there were fatalities among them.

In a statement issued from Mogadishu, the Somali capital, a spokesman of Al- Shabaab, who gave his name as Sheikh Ali Mohamud Rage claimed that his organisation had carried out the two explosions. There were some doubts whether these were timed or suicide explosions, but an Ugandan official said that the head of a person believed to be a Somali was found at the site of one of the blasts, thereby indicating that at least one, if not both the blasts, was carried out by a suicide bomber.

The Al-Shabaab spokesman has been quoted by news agencies as saying as follows: "Al-Shabaab was behind the two bomb blasts in Uganda. We thank the mujahideen that carried out the attack. We are sending a message to Uganda and Burundi, if they do not take out their Amisom (African Union Mission in Somalia) troops from Somalia, blasts will continue and it will happen in Bujumbura, the Burundi capital, too." These were thus reprisal attacks by Al-Shabaab against Uganda for participating in the African contingent helping the Somali authorities in their operations against Al-Shabaab and other jihadi elements in Somalia.

Al-Shabaab chief Mohamed Abdi Godane had warned in an audio message earlier this month that Uganda and Burundi would be targeted. The main wing of Al Qaeda based in North Waziristan in Pakistan, the Yemen-based Al Qaeda in the Arabian Peninsula (AQAP) and Al-Shabaab based in Somalia have continued to maintain a capability for planning and carrying out reprisal acts of terrorism in different parts of the world despite US claims of having eliminated many senior leaders of Al Qaeda through its drone (pilotless plane) strikes in North and South Waziristan.

The deaths in the drone strikes of many Al Qaeda leaders such as its No 3 Sai'd al-Masri (al-Masri means the Egyptian) also known as Mustafa Abu al-Yazid in May and  Saleh-al-Somali from Somalia on December 8, 2009, have not weakened the capability of Al Qaeda to plan and mount terrorist strikes -- some successfully, some unsuccessfully. The successful ones have been in the Af-Pak area, Somalia and Uganda and the unsuccessful ones in the UK, the US and Norway.

In supplementary indictments filed recently by federal prosecutors in Brooklyn, US, they have alleged that before his death Saleh al-Somali was involved along with Rashid Rauf, a Mirpuri from Birmingham, who was also killed in a Drone strike, and Adnan El-Shukrijumah, an absconding US national of Saudi origin, in organising a conspiracy by Afghan immigrant Najibullah Zazi and others to bomb New York City subways last September.

Along with the Saudis, Egyptians and Yemenis, the Somalis have been among the important components of Al Qaeda. Osama bin Laden had earlier used them for the terrorist strikes outside the US embassies in Nairobi and Dar-es-Salaam in August 1998, and in Mombasa in October 2002. The Somalis of Al-Shabaab have now operated successfully in Kampala. The Yemeni and Somali wing of Al Qaeda have exhibited a certain operational autonomy which enables them to mount terrorist strikes on their own without having to depend on the main wing of Al Qaeda in Pakistan.

While Al-Shabaab has extended its operations to Africa, the AQAP has been trying to extend its reach to South-East Asia as indicated by the recent detentions of two Singapore nationals with suspected contacts with the AQAP. 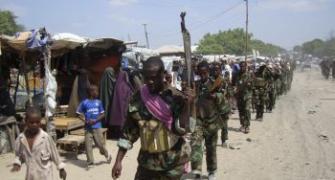 Al-Qaeda is under serious pressure: US official