With Sheikh Hasina as Bangladesh prime minister, all is well with the world of India-Bangladesh relations, says Ambassador T P Sreenivasan. I was never posted to Bangladesh as we have a large number of competent diplomats who speak Bengali, but I had witnessed the birth pangs of Bangladesh when I was in Thimphu during the war and in Moscow in the aftermath of it.

I had the unique privilege of accepting a letter from the king of Bhutan addressed to the Rashtrapati, conveying the recognition of the People's Republic of Bangladesh by Bhutan, the first country in the world to do so after India.

In Moscow, I was involved in assisting new Bangladesh diplomats to settle down to business.

I visited Bangladesh for the first time in strange circumstances in 1982, when I was at the permanent mission of India to the United Nations in New York.

As a delegation to promote Namibian independence, six diplomats from various countries reached Colombo on our way to Dhaka and Delhi when the news broke out that General Mohammed Ershad had taken over the government in a coup.

We promptly cancelled our trip to Dhaka. But within minutes, the Bangladesh high commissioner to Sri Lanka came to our hotel and said that General Ershad was ready to meet us and that we should not cancel the visit.

Apparently, he felt that it would generate negative publicity if a UN delegation cancelled its visit. Our respective governments were not happy, but left it to us to travel at our own risk.

General Ershad was so happy about our arrival in Dhaka a day after the coup that he ordered the highest protocol treatment for us.

We were put up at the Padma guest house, normally reserved for heads of State and government, and treated like them.

We were the first diplomats to call on him and a story was put out that we were convinced that the situation was normal.

General Ershad received us warmly and said he had just saved his country by stepping in, something which all dictators say after coups.

He separately spoke to me about India and asked me to assure the Indian government that he would be friendly to India.

He said the Indian high commissioner would be meeting him the same day. I thus became the first Indian official to meet him after the coup.

Back in India, I was asked questions about him at different levels and I said that he appeared positive. They appeared a bit sceptical.

As it turned out, India-Bangladesh relations were not particularly smooth during his time. Another set of circumstances took me to Dhaka this week. When Sheikh Hasina was invited to the village of Punalal near Vellanad to receive the Dr Kalam Smriti International Award of Excellence, instituted by the Dale View educational institutions and she suggested that some of us should visit Dhaka to present it, I led a delegation to visit Dhaka.

I thought that we would get only a few seconds to present the award in an assembly chain format.

Seven of us travelled from Thiruvananthapuram to Dhaka without any great expectations except that we would be able to reach the award, a sculpture by Kanayi Kunhiraman to Sheikh Hasina's hands.

But the importance that she gave to the event was most exceptional, essentially because of the Kalam magic and her respect for India.

The protocol designed the event for half an hour, but she spent more than two hours with us, including two meetings with me one before and another after the ceremony.

Every word she spoke about India and Dr A P J Abdul Kalam was positive and respectful. I presented the award and a citation, plaque, a saree and a ponnada were presented by the trustees of the Kalam Smriti International.

After we had a pleasant conversation about cabbages and kings, she asked me "in confidence" as to how she was selected for the award.

When I said that she was the only and natural choice for the award, because of her being the architect of excellent India-Bangladesh relations, she appeared satisfied that the award was truly a people's choice.

Bearing this in mind, I said in my speech: "For an award for world leaders, in the name of such a person, we could not have thought of anyone better than Her Excellency Sheikh Hasina, a visionary, thinker and an inspiration for millions. The longest serving prime minister of Bangladesh is well on her way to build the Sonar Bangla her father, Bangabandhu Sheikh Mujibur Rahman dreamt of and died for."

Sheikh Hasina reminisced about Dr Kalam most affectionately, saying that her husband also was a nuclear scientist and that his transformation from a scientist to a statesman was amazingly smooth.

It was obvious that she accepted the invitation readily because the award was in the name of Dr Kalam. "This award will inspire me and my government to strive for the achievement of greater inclusive development."

In a final gesture of goodwill, she said that the Bangabandhu Museum would close at 5 pm, but we should not go away without visiting it and she volunteered to open it for us.

The traffic was tough and we reached at 7 pm, but the whole staff of the museum was waiting for us. They patiently took us around the museum and explained all its features.

The museum is the house in which Sheikh Mujib lived for many years, before and after he became the prime minister.

He and his eight relatives, including children were murdered in cold blood by a group of soldiers to avenge the division of Pakistan.

The building is replete with bullet and blood marks, showing signs of a struggle. The building has been preserved as it was except for some ramps which were built to facilitate access for the visitors.

The Bangabandhu Museum is certainly a monument to the father of the nation, his life and his martyrdom, but it is also a memorial to the depravity and cruelty of human beings, which make them worse than animals.

How could those criminals be so heartless as to murder the one man who had dedicated his life to his motherland.

Sheikh Hasina had explained to us how, as prime minister, she had brought them to book. She had tears in her eyes when she recalled how she and another sister had escaped because they were abroad at the time.

She is totally indebted to India for taking care of her during those days of extreme danger and anxiety. Without India and Indira Gandhi, we too would have become martyrs, she said, choked by emotion.

Sheikh Hasina expressed full confidence in India and said sky was the limit for bilateral cooperation. She said India was the first priority for her and India was welcome to invest in Bangladesh on a partnership basis.

She expressed appreciation for Prime Minister Narendra D Modi's 'Neighbours First' policy. Even when he spoke of the future of the country, she laid great stress on India' generosity and friendship.

"Over the last decade, Bangladesh-India relations have reached a new high, marked by mutual trust, confidence and goodwill. We have witnessed remarkable progress in cooperation between our two countries in different conventional and unconventional areas. I believe that that this trend of cooperation will continue and, coupled with the achievement of the SDGs, these will help build a prosperous Bangladesh by 2041... Long live Bangladesh India friendship."

The contrasting two faces of Bangladesh struck me as characteristic of South Asia. Our relations fluctuate when leaders change in these countries.

But, with Sheikh Hasina in Dhaka, all is well with the world of India-Bangladesh relations. 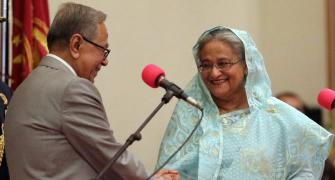