'Beijing is comfortable with Hasina's pragmatism -- perceived as 'pro-India', but staying out of Indian orbit and receptive to forging close ties with China and yet, siding with neither neighbour,' says Ambassador M K Bhadrakumar. 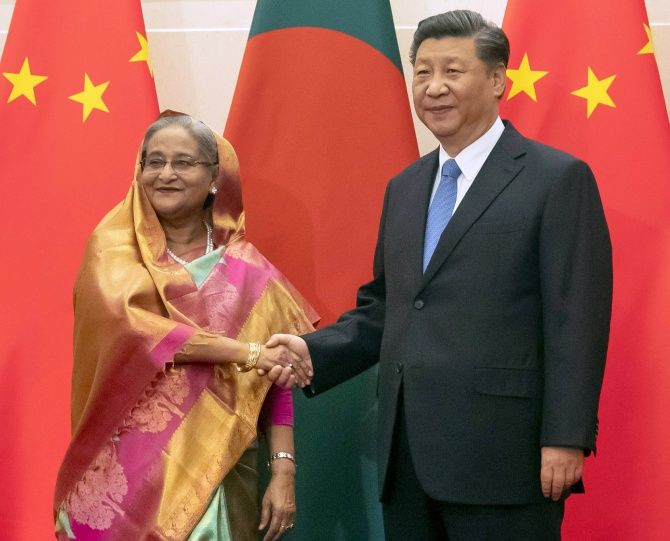 Hasina has set the compass to navigate her country to the status of a middle income country by 2021 on the path to 'Sonar Bangla' and a developed country by 2041.

To my mind, the three main 'takeaways' from Hasina's China visit are:

Beijing is comfortable with Hasina's pragmatism -- perceived as 'pro-India', but staying out of Indian orbit and receptive to forging close ties with China and yet, siding with neither neighbour.

China appreciates Hasina's disinterest bordering on indifference toward the 'great game' in the Indian Ocean with Washington pushing hard to extend its cold war in the South Asian region.

Fundamentally, China anticipates that 'Sonar Bangla' is a dream that may come true.

Bangladesh with a market of 170 million people offers to China huge untapped potential for economic cooperation, investment and trade.

And China can provide loans and technology transfer and be a key partner in the construction of infrastructure projects in fields such as transportation, power distribution and telecommunication.

Equally, China factors in the potential of Bangladesh as a gateway to the Indian market, the last frontier in Beijing's regional strategies.

Against this backdrop, India needs to rethink its South Asian strategy.

Clearly, it will not serve Indian interests to bandwagon with the US's new Cold War agenda in South Asia and the Indian Ocean. The recent rebuff to the aggressive US move to force Colombo into a security pact underscores that the regional States in South Asia are following the trajectory of the ASEAN countries in refusing to identify with the US's containment policies toward China.

The elected governments in the South Asian countries prioritise their development agenda.

They seek an external environment that is conducive to growth and development and give primacy to regional security and stability.

India could play a leadership role. But aberrations have crept in.

In Sri Lanka (2015), Indian diplomacy tasted blood by collaborating with the Anglo-American project at 'regime change'.

The ensuing headiness led to a failed project to transform Nepal as a 'Hindu Rashtra' (2016-2018) -- with disastrous consequences.

But then, a replay in the Maldives (2018) met with success -- although the arrangement in Sri Lanka unravelled.

Does it make sense for India to practise from the American rule book in Latin America? The US's neo-colonial practices in Latin America are riveted on a weighty mercantilistic agenda.

From banana plantations to copper mines to oil fields, from Argentina to Mexico, US multi-national corporations are driving the US policies in Latin America.

On the contrary, Indian diplomacy is indulging in esoteric pastimes, marking time.

The Colombo leadership that succeeded Mahinda Rajapaksa in 2015 didn't award a single major project to India.

Meanwhile, the US used India as a door mat to make inroads into Sri Lanka. And the result is Sri Lanka has been seriously destabilised, thanks to intrusive US policies.

China is a stakeholder in the security and stability of South Asia, which borders some of its own least developed regions.

India should take a fresh look at the BCIM-EC. In a dispatch from Beijing on the meeting between Xi Jinping and Sheikh Hasina on July 6, The Hindu newspaper's veteran foreign corespondent Atul Aneja wrote:

'The revival of Chinese interest in the BCIM-EC in coordination with India was evident when Mr Xi singled out the project as an example of expanding the India-China ties, which had entered a "new phase" after the Wuhan informal summit held last year in April, following last month's talks with Mr Modi on the sidelines of the Shanghai Cooperation Organisation (SCO) summit in Bishkek.'

'In tune with China's intent to engage with India to spur the BCIM-EC, President Xi and Prime Minister Hasina acknowledged that "the initiative would have to be revived working together with India," the United News of Bangladesh (UNB) reported on its website.'

The BCIM-EC should be a test case of the efficacy of the 'China-India Plus' concept of cooperation that Beijing has been advocating.

There is much that can be achieved for strengthening regional stability if India were to join hands with China. The Rohingya crisis is a case in point.

Why can't India and China adopt a joint approach? In fact, the US is playing devious games on the Rohingya issue. On Monday, July 8, at a press conference in Dhaka, Hasina tore into the explosive proposal floated recently by US Congressman Brad Sherman, chairman of the house Asia and Pacific subcommittee, to the effect that Bangladesh should annex Rakhine state in yanmar.

Hasina hit back: 'This is a flagitious and unjustified proposal. It is never acceptable... we are happy with our 54,000 square mile or 147, 000 square kilometre territory... Fire has engulfed wherever they (US) gave hand ... peace didn't come anywhere and militancy and unrest were created.'

'We are trying to maintain peace in the region, but there are efforts by them (the US) to light fire... it's never acceptable.'

Hasina added that the Chinese leaders have assured Dhaka of persuading their crucial ally Myanmar to end the crisis by taking back the Rohingyas.

'China assured us it will remain beside Bangladesh in the repatriation of the Rohingyas. Is it not good news for us?' Hasina asked. 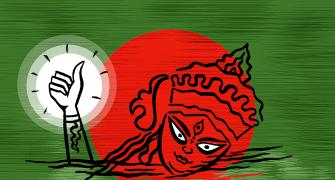