Truth behind the Kokrajhar violence

Kokrajhar happens when the State colludes with foreigners to capture power and as a result its own loyal citizens are uprooted and killed, says Tarun Vijay

From our Olympics contingent in London to Kokrajhar in Assam, India has become a free land for trespassers. If genuine sportspersons were overshadowed and embarrassed by the 'lady in the red' in London, native Bodos were killed and devastated by Bangladeshi infiltrators in Kokrajhar.

And while the State apparatus totally failed to protect the honour and lives of Indians from infiltrators in Kokrajhar, the prime minister's visit to Assam proved to be a lame-duck affair, with no word of sympathy for Bodos who are the victims, or no announcement of plans to detect and deport Bangladeshi infiltrators who have become the single biggest threat to India's security and sovereignty.

Unconfirmed reports say more than a hundred have died and 2.5 lakhs have become refugees. The camps have become a torture centre for Bodo refugees with no help available and victims being turned away.

Who feels the pains of an Indian?

And what have we seen so far? News headlines screamed: Muslim members of Parliament from various political parties met the home minister seeking help for Muslim refugees. Another news report said a secular Muslim leader has blamed the Assam government for 'doing a Gujarat'.

This is how India's secular politicians try to uphold the basic tenets of their variety of secularism.

When I spoke to the energetic MP from the Bodo Peoples Front, Biswajit Daimury, he was in tears and said, 'It looks as if Bodos do not exist for anyone. Nobody says a word about their pains and sorrows.'

Imagine a news report headline such as: 'Hindu MPs from various political parties met the home minister to seek protection for Bodo Hindus'. The media and political bigwigs would have condemned the move, criticised it as communal and editorialised on the shameful conduct of those who are supposed to uphold the secular character of the Constitution.

Kokrajhar happens when the State colludes with foreigners to capture power and as a result its own loyal citizens are uprooted and killed.

The violence is a direct result of the State apparatus's lackadaisical attitude towards those who swear in the name of the tricolour and Constitution. When the rulers give blind support to those who infiltrate Indian territories to launch a demographic invasion and capture our land, the trust between loyal citizens and their constitutionally appointed protectors is broken.

If it were not so, the Bodos, a highly intelligent and brave people committed to the Constitution and Indian culture, would never have felt the need to have their own administrative area. Even after an agreement was inked on February 10, 2003, they were cheated and ignored by the central government. The grants were not given according to their population ratio, as was agreed to in the agreement.

Nine years have passed yet the Bodos have not been recognised as tribals in the Assam plains, Karbianglong and North Cachar Hills, although several other communities like the Hazong, Garo and Lalungs have been included in the ST list during this very period.

Why should the Bodos remain patriotic when nobody listens to them and every body wants to help and shield the Bangladeshi infiltrators?

Dr Anand Kumar wrote for South Asia Analysis Group in 2008, 'After returning from the 28th India-Bangladesh Border Coordination Conference in Dhaka, the BSF chief A K Mitra disclosed that nearly 12 lakh Bangladeshis who had entered India on valid papers have disappeared between 1972 to 2005. He was quoting this figure from the intelligence reports of the West Bengal government.

This is one of the few official figures about the illegal Bangladeshi immigrants whose number has been estimated to be around 20 million and growing by the day. Out of this number nearly six million illegal Bangladeshis are residing in Assam, where they have turned five of the bordering districts into migrant-majority areas. What is however, most concerning is that these illegal immigrants are now threatening to swamp the tribal and rural areas of Assam and other parts of the country.'

This shows how successive governments have failed to detect and deport foreigners. To such levels has the frustration of Indian citizens reached that DN Bezbaruah, an oldtime friend, former president of the Editors Guild of India and a celebrated editor of The Sentinel, said to me, 'Tarun, you Delhiwallahs' India begins at Vaishno Devi and ends at Kolkata. You people really don't care for the pains and travails of north-eastern citizens.'

Even the Guwahati high court in a judgment delivered on July 23, 2008, had observed that the Bangladeshi migrants have become the kingmakers.

An independent news report as this stated: 'Dhubri, in fact, is central to this clash between Bodos and immigrant Muslims over land. Over the last five years, the Muslims from Dhubri have migrated to Kokrajhar in huge numbers, raising the hackles of Kokrajhar residents'.

'At Golokganj market, the police resorted to lathicharge and blank fires after a clash broke out between AAMSU activists and shop-owners. At Gauripur, AAMSU activists set ablaze 35 houses along with the office of the Bodoland Peoples' Front.'

For four days, neither Chief Minister Tarun Gogoi nor the police chief found time to visit the violence-affected areas. Later, when questioned, Gogoi blamed the central government's lethargy and made an almost blank visit to Kokrajhar. It's noteworthy that the police remain a state subject outside the control of the Bodo Autonomous Council.

And in spite of the Bodoland agreement signed in February 2003 by the then deputy prime minister LK Advani with Bodo leaders, which assured the inclusion of Bodos in the scheduled tribe list, nothing has been done in that direction so far, as stated earlier.

A major Assam daily, the Sentinel, wrote in its editorial last week: 'In the last three decades, we have been witness to a callous indifference to the disasters that have overtaken people as a result of the actions of politicians directed solely at electoral gains even with the help of foreign nationals. At this point, any objective and dispassionate penal action against rioters would seem to be quite impossible because of their electoral clout and the inability of the government to punish wrongdoing on the part of the so-called minorities who are actually in a majority in several of the districts of Assam.'

Situated on the northern banks of the Brahmaputra river, Bodoland includes the Bodoland Territorial Areas District, which is administered by the Bodoland Territorial Council. The territory consists of four districts, viz, Kokrajhar, Baksa, Chirang and Udalguri, with Kokrajhar serving as the capital. Tension among Bangladeshi infiltrators and native Bodos has been simmering in the region.

BDIs are further backed by the Muslim United Liberation Tigers of Assam, a terrorist organization, and also by the All Minority Student's Union, who get government support. A new faction from the AMSU was created to cater exclusively to Muslims of the Bodoland region and was named the All Bodoland Minority Students Union, which is the main culprit behind the current situation in Assam.

The violence has since spread to over 400 villages in the BTAD region. Houses have been burnt down and abandoned. People live in refugee camps in their own country because of hostilities from the people of a foreign land. The conditions in the refugee camps are extremely poor. Food supply is scarce, there are no medicines available and as if that was not enough, the security in the camps is woeful. The Centre has deployed 29 companies of paramilitary forces to control the situation, which is turning extremely hapless by the day.

What have we become as a nation? In a nation that celebrates the triumph of Ram on Vijayadashami every year, Ram worshippers are eliminated for vote-bank gains by helping foreigners get fake certificates of citizenship.
Tarun Vijay
Related News: Assam, Kokrajhar, Bodos, All Bodoland Minority Students Union, Bodoland Territorial Area Districts
Print this article
Assam: It's time to stop the clock and look back 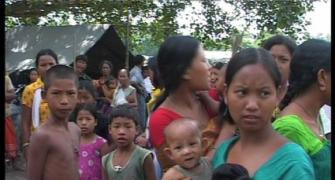 'Everyone for redeployment of army in riot-hit Assam'
It's not a Hindu vs Muslim conflict in Assam, but Indians vs foreigners