'With English the most rapidly growing medium of instruction in India's schools and accounting now for more than one-sixth of the total (next only to Hindi, which accounts for a half), India is not about to turn its face away from a language that has global currency,' notes T N Ninan.
Illustration: Uttam Ghosh/Rediff.com The report stresses 'the need for an educational policy which contains a built-in flexibility so that it can adjust to changing circumstances. It underscores the importance of experimentation and innovation... the single most important thing needed now is to get out of the rigidity of the present system'.

Further, there is the need for the 'introduction of work-experience (which includes manual work, production experience, etc) and social service as integral parts of general education at more or less all levels of education'.

And finally, there should be 'stress on moral education and inculcation of a sense of social responsibility'.

Those are not the words of Ramesh Pokhriyal, minister in the re-named ministry of education, but of D S Kothari -- written in 1966 when presenting to the then education minister the report of the Education Commission that Kothari had chaired.

The Kothari Commission's recommendation of a 10+2 school system was adopted, but the Plus Two stage that was supposed to introduce vocational education has turned out differently in practice, as have other hopes like getting rid of system rigidity.

Mr Pokhriyal's new National Education Policy is a more ambitious document than the Kothari report, with many positive features -- including the stress on the mother tongue (also recommended by Kothari), the incorporation of pre-school education into the main education system, and all-round flexibility in course structures.

Whether these will work out as intended depends on how 30-plus states and Union territories respond, on whether 1.2 million anganwadis can be re-purposed, and how 1.5 million schools adapt.

Consider, for instance, the question of English.

Will it meet the fate of French, once the language of the Russian aristocracy and court (Pushkin, generally accepted as the founder of modern Russian, is believed to have written 90 per cent of his letters to women in French)?

Or will English in India become the equivalent of Spanish and Portuguese in Latin America, conquerors' languages that became de facto 'native' to some 90 per cent of Latin Americans? Neither, one should think.

The native languages of India are not going to meet the hapless fate of Quechua, Guarani, and Aymara, the pre-Columbian languages now spoken by only a tiny minority in South and Central America.

Equally, with English the most rapidly growing medium of instruction in India's schools and accounting now for more than one-sixth of the total (next only to Hindi, which accounts for a half), India is not about to turn its face away from a language that has global currency.

The Andhra Pradesh government may be mistaken in pushing for English as the primary medium of instruction in its schools, as Jammu and Kashmir did much earlier.

But how do you deal with the fact that Marathi-medium schools in Mumbai are emptying out, as the demand for English grows? Or teach the children of 140 million migrant workers in their mother tongues?

With cities like Delhi, Bengaluru and Mumbai populated more than half by people whose mother tongues are not the local Hindi, Kannada or Marathi, straightforward propositions about the mother tongue can become complicated.

How many mother tongues should Delhi cater to in its schools: Bengali, Marathi, Tamil, Gujarati... in addition to Hindi and Punjabi (and not forgetting Urdu)?

As the son of a father with a transferable job, I survived being taught in two languages as the medium of instruction, and failed in three different 'third languages' by Class VI!

The fact is that English (like Hindi) has greater acceptance than its numerical strength as mother tongue.

It remains the aspirational language -- for reasons far removed from a colonial history that ended three generations ago.

It will never be the language spoken in most homes, or the primary language of politics. Bear in mind that only one of the top 10 most popular daily newspapers is published in English, and the share of English in news television and in the entertainment media is similarly minuscule.

But English will continue to have its place in the corporate and financial worlds, in the higher courts, and for the foreseeable future as one of two official languages. Perhaps that is as it should be. 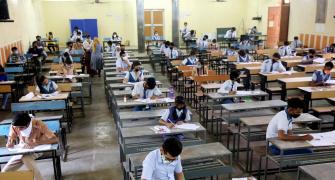 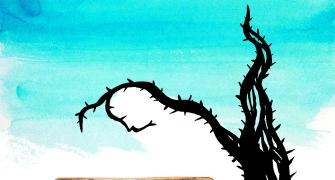 The Triumph of English, and why it's good for our youth