'The non-vegetarian share of the population fell from 75 to 71 per cent between 2004 and 2014, no doubt in anticipation of the lotus blooming.'
'Three years of saffron authoritarianism may have thinned the non-vegetarian ranks even more,' says Sunanda K Datta-Ray.
Illustration: Uttam Ghosh/Rediff.com 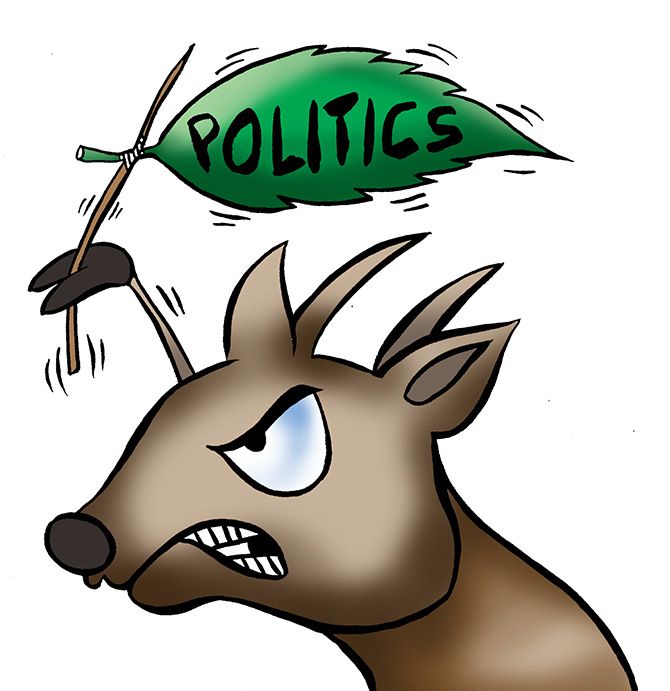 One reason why West Bengal stood rock fast against the saffron sweep was that Bengalis are diehard non-vegetarians. That's like garlic to Dracula.

The reason given is that non-vegetarian food putrefies quicker than fruit and vegetables. Some also say vegetarian food is more healthy and hygienic.

Others cite a bogus religious rationale for Hinduism hardly preaches abstinence from meat and fish. The ban won't be replicated in Mamata Banerjee's carnivorous stronghold where only widows are vegetarian, or were, when I was young.

Even that is changing. Shock and horror, "even Brahmins in Bengal are non-vegetarian," says Kakali Chakrabarty, deputy director of the Anthropological Survey of India. She should know. Chakrabarty (literally 'wheels rolling', signifying emperor) is a Bengali Brahmin surname.

Unsurprisingly, an ASI survey claims that 98.7 per cent of Bengali men and 98.4 per cent women are almost as omnivorous as the Chinese who are said to wolf down anything that moves. Almost, but not quite.

Bhadralok tastes don't run to dog, ants and snakes. As for our feathered friends, it used to be said a villager's religion could easily be identified in rural Bengal: Quacking ducks waddled in a Hindu family's yard, chicken scampered about a Muslim homestead.

Bengal's addiction to fish is a national joke.

"Since riverine fish are in plenty, Bengal is a fish and meat-loving state," Ms Chakrabarty says. She rightly stresses 'riverine'.

The legendary chief minister, Dr Bidhan Chandra Roy, imported trawlers and tried to popularise sea fish. He failed although economic necessity has since forced Bengalis to turn to tuna, sardine and even the Vietnamese basa.

"Food habits of any place depend on its ecology," Ms Chakrabarty concludes without dwelling on the link with politics.

But the local tilapia's identification with both Christ's parable of the loaves and fishes and the fish with a coin in its mouth St Peter caught indicates an ecumenism that the Sangh Parivar would disapprove of.

Pork and beef -- one forbidden to Muslims, the other to Hindus -- were not traditional cuisine. But while the 'No Beef' signs on many cheaper eating houses would delight gau rakshaks, Kolkata's popular kebab shops wouldn't.

Righteous vigilantes wouldn't dare approach expensive restaurants that boast of their veal cutlets and underdone steak. But here's the rub: Wicked whisper has it these establishments cater mainly to non-Bengali businessmen who are as strictly vegetarian at home as they are fervent worshippers of the lotus.

But, then, eyewitnesses speak of chocolate pedlars surreptitiously catering to peckish Gandhians even in Sevagram.

Bengal was beaten in the ASI's non-vegetarian stakes only by Telangana where the BJP ranks fifth in the assembly with just five legislators.

Among other primarily non-vegetarian states, Andhra Pradesh has a TDP government; Nitish Kumar's coalition in Bihar doesn't count since the BJP wriggled in through the back door and not the popular vote; while the BJP has only a solitary MLA in Left Democratic Front-ruled Kerala, the only state where beef is openly served in middle class restaurants. Predictably, vegetarian Rajasthan and Haryana are loyal to the BJP.

Punjab is the sole exception to the vegetarian-means-saffron rule: A royal in the lists (Maharaja Amarinder Singh of Patiala being chief minister) refutes logic in hierarchical India.

Such unlikely bedfellows nourish the hope that India isn't condemned to a future in baggy shorts and peaked cap munching chana and marching in the sun. The signs seem ominous.

The non-vegetarian share of the population fell from 75 to 71 per cent between 2004 and 2014, no doubt in anticipation of the lotus blooming. Three years of saffron authoritarianism may have thinned the non-vegetarian ranks even more.

But the patronage of one of the few public personalities to criticise growing intolerance can only liberate vegetarianism from bondage to politics associated with bans, lynching and ghar wapsi, and restore faith in the promise 'to promote the joy, compassion and life-enhancing possibilities of vegetarianism'. 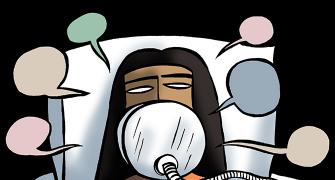 Have you heard of Bharatvani? 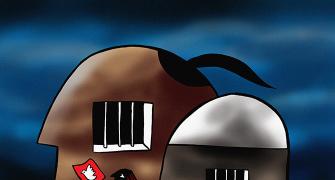 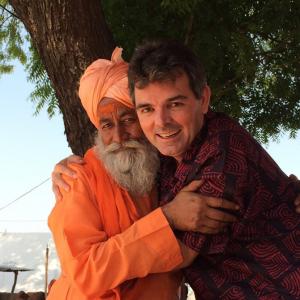