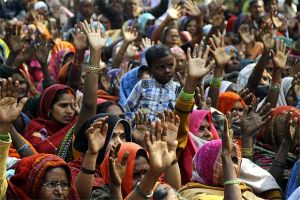 Indians are election junkies, and that includes all of us -- political parties, aspirants for seats, pollsters, pundits parsing straws in the wind, says Shreekant Sambrani

Time was when the weather was considered the perfect conversation starter between strangers. That has now changed in India. Who needs boring weather, when that great addiction of ours, the far more exciting elections, is always handy? Indians are election junkies, and that includes all of us -- political parties, aspirants for seats, pollsters, pundits parsing straws in the wind, polls, results, anything really, and average citizenry who find the ballot dramas played out on their screens and in their papers as endlessly intriguing as family sagas.

This time last year we had barely recovered from the thrill of the 5 assembly elections at the end of 2013. Voting for the sixteenth Lok Sabha (and four assemblies) was our preoccupation for almost the entire first half of the year. Four more state legislatures were elected in two tranches in the remainder of the year. Thus we very nearly overdosed on our electoral fixes in 2014.

This is a year of slim pickings. Only Bihar would have ordinarily had elections towards the end of the year. But by dissolving the suspended Delhi assembly and holding fresh polls to it next month, the central government and the Election Commission have delayed the onset of withdrawal symptoms.

Four states will elect new assemblies in 2016 and five in 2017. The crescendo will build up to the general election in 2019 with 18 more state elections in the next 2 years. That covers every single year in the 5 years between the two national elections. Effectively, we are in permanent election mode at all times due to some or the other important state elections being held in any given year. This has come about because most state assemblies have not lasted their full terms at some time or the other, throwing the election calendar in flux.

The democratic process is doubtless strengthened by such developments. The people get to exercise their choice at frequent intervals. Seekers of political office have to be alert to their needs, at least in theory.

Several other consequences of constant elections are, however, not so salutary. First, as we have already seen, hard but necessary actions are delayed, perhaps inordinately so. Rail tariffs remained unchanged for almost the entire United Progressive Alliance term despite the railways being on the verge of financial ruin because of state elections including those in Bihar and West Bengal, the home states of railway ministers. Subsidies for petroleum products mounted, because some state or the other was always going to polls. Myriad other public policy decisions were dictated solely by populist compulsions, as they continue to do so even now.

Second, political decision-makers take time off for electioneering from their day jobs of minding and running the country. The new prime minister may be a campaigner nonpareil, but the time he devotes to drive his party to sundry victories is at a great opportunity cost for the nation. Disruptions in elected houses are perceived to be indicative of the support of various electoral causes of those engaging in them. Thus, often petty election battles are fought at the expense of greater national good. Since March to May in any year is the preferred time for many elections, the biggest casualty is an informed and detailed discussion of budgets of various states and indeed, the country as a whole.

Third, costs of holding repeated elections have risen sharply. The first general election in 1952 cost a tad over Rs 10 crore. The Election Commission's website states that the 2004 Lok Sabha elections cost Rs 1,300 crore. The Centre for Media Studies estimated that the cost of the 2009 Lok Sabha election was over Rs 10,000 crore, not counting productivity losses. The parties, too, incur huge expenses: recently released data state that the Bharatiya Janata Party spent over Rs 700 crore and the Congress over Rs 500 crore on the 2014 national elections.

State elections would cost a similar amount, and not wholly on a pro rata basis. This huge increase is due to the far more complex process that has evolved over time. At that, one is not sure if it includes all the costs attributable to elections. The very sizeable deployment of security forces and their movement in the field itself must cost a pretty penny, some of it hidden away in other budget heads.

Several hundred senior administrators, mostly from the IAS cadre, are taken away from their normal function to act as election observers for up to two months or so. That surely has a cost in terms of temporary arrangements and decisions foregone or postponed. And we are only looking at government costs. When all costs to all agencies are factored in, it should not surprise us if the total is in tens of thousands of crores off rupees every major election year, and steadily rising.

It is time, therefore, when, like the United States, we must think of fixed terms for legislatures, including the Lok Sabha, and holding elections together for the whole country. This is not as impractical as some may think at first, if it is accompanied by some correctives.

The problem of hung houses and loss of confidence can be rectified by enacting relatively simple remedies. If no party or coalition is able to cobble together a majority to be proven by a vote of confidence within, say, a month of the constitution of the house, the body must be directed to elect a leader who enjoys majority support in another month's time. No absences or abstentions would be allowed in this vote.

The possibility of no candidate getting a majority could be addressed by a provision of either a run-off between the top two candidates, or recording of second preferences, as is done in case of legislative council or Rajya Sabha elections. The uncertainty thus would continue at worst for two months.

A vote of no confidence, to be effective, must be accompanied simultaneously by a constructive vote of confidence for another leader, as is required in Germany. A government thus cannot be toppled without installing another one and the legislative body need not be dissolved before its term.

Consider the benefits of these not so difficult changes to our Representation of People Act. We will face elections with all their costs and disruptions only once in five years. The legislators and governments will not be looking over their shoulders at all times and be able to address concerns other than the purely short-term ones as they do at present. And a sizeable amount will be saved. But we will need to look for other fixes for our addiction!