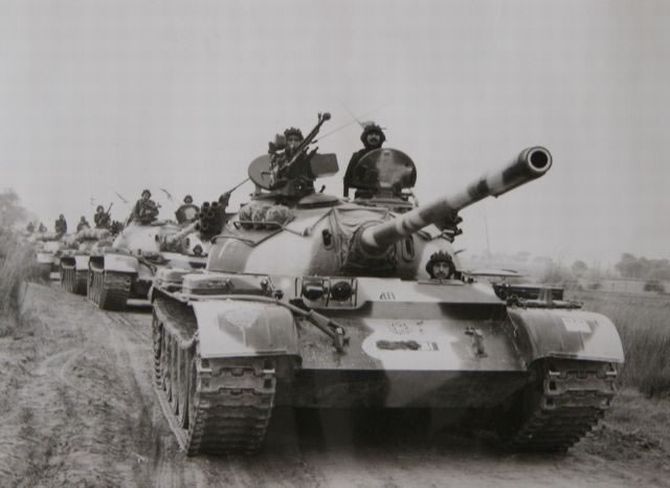 The 1965 war teaches us that war by escalation is a real possibility. Despite clear threats, Pakistan never believed that India would ever cross the international border.'

'In the age of nuclear deterrence, this failure to deter Pakistan is the central lesson of 1965,' says Colonel Anil A Athale (retd).

The India-Pakistan war of 1965 is the least commented and remembered conflict of post-Independence India. This year, 2015, is the 50th year of that event and it is worthwhile recalling those events as the root cause of that conflict, the Kashmir dispute is still unresolved and there are many useful lessons that can be learnt by an in-depth assessment of that conflict.

Pakistan for long time has been celebrating this as a 'defensive victory' and September 6 is observed as 'Defence of Pakistan' day. There are two reasons why this war was sidelined in India -- the prime minister at the time, Lal Bahadur Shastri was not from the ruling dynasty and any prominence to him would have dimmed the lustre from the ruling family's image.

The second reason was that as far as India is concerned it was a 'draw' and not a clear cut victory like the 1971 war and that it did no credit to India that is several times bigger than Pakistan.

The 1965 India-Pakistan war was the last realistic chance for Pakistan to acquire Kashmir by force and she lost it.

The war that lasted till September 23, 1965 can be conveniently divided into three distinct parts. In the first part Pakistani infiltrators, a mix of mujahids and regular soldiers infiltrated into the Kashmir valley as well as the Rajouri-Poonch area beginning August 5, 1965.

The second part began on September 1 when discarding the fiction of 'freedom fighters,' the Pakistani regular army, backed by tanks and aircraft, launched a full-fledged conventional attack in the Chhamb sector towards Akhnoor.

The third and final part of the war began when India crossed the international border on September 6 and began its advance towards Lahore, the second largest city of Pakistan.

Subsequently the war spread to all sectors of the border right up to the deserts of Rajasthan. The war saw a failed attempt by Pakistan to launch a major armoured thrust from Khemkaran towards the bridge over the Beas to the rear of Amritsar and the Indian counterstroke in the Sialkot sector that also stalled within a few kilometres inside Pakistan.

The war ended on September 23 when both the countries accepted the United Nations ceasefire proposal.

In any study of war, there are two aspects, what happened and why it happened. This article will confine itself to the 'why' part of the analysis as there are enough accurate eyewitness accounts of what actually happened. The 'why' part is also more important for the present since it deals with the mindsets, decision-making, assumptions and doctrine of each nation.

These remain constant while the changes in technology including the advent of nuclear weapons in both countries make the battles and what happened of less interest for the present and future.

It is by now quite clear and widely accepted in both countries that Pakistan initiated the conflict. Pakistan's decision to start the conflict with infiltration was based on a complex set of factors.

In the long term view, Pakistan saw itself as the successor State to the Mughal empire and was never really reconciled to 'moth-eaten Pakistan' (in Mohammad Ali Jinnah's words) that it got. The dream to unfurl the green flag of Islam on the Red Fort in Delhi was (and is) an integral part of the Pakistani psyche. No less a person than Winston Churchill had prophesised 'the departure of the British from India, which Mahatma Gandhi advocates, and which Jawaharlal Nehru demands, would be followed first by a struggle in the north and thereafter by a re-conquest of the south by the north, and of the Hindus by the Moslems' (Speech on March 18, 1931).

President Ayub Khan while visiting the US in 1961 (July 11) told President John F Kennedy that he believed that India would not stay united for long after Nehru and Pakistan would bear the responsibility to 'defend' South Asia from Communist aggression. The Pakistani mindset had been nurtured by the peculiar reading of history that extrapolated the conquest of the north Indian plains on the whole of India.

Thus was born the enduring myth of a 1,000 year rule. In the Pakistani belief system, one Pakistani soldier was equal to ten Indians. This formed the basic backdrop to Pakistani decision making in 1965.

India's defeat at the hands of the Chinese in 1962 was keenly watched by Pakistan and it came to the conclusion that if it were to follow the Chinese tactics of infiltration into the rear areas, the Indian Army manning the border would be forced to withdraw.

Nehru's death in May 1964 and his succession by Shastri was also seen as favouring Pakistan. Shastri was regarded as a weak leader. Language riots in India in 1964/1965 also gave Pakistan hope that India was indeed crumbling internally.

The Hazratbal disappearance and the resultant riots in Kashmir convinced Pakistan that the infiltrators would be supported by the Kashmiris and it could then present it as an internal revolt and not external aggression.

While these factors were seen as helping Pakistan, there was also anxiety over Western military aid to India in wake of the Chinese aggression of 1962. The Western powers had promised military aid to India to raise 10 mountain divisions. Pakistan figured that if it waited any longer then India would be too strong to overcome militarily.

This 'Now or Never' was a major factor in the Pakistani decision to embark on the attack in 1965.

It tested the Indian Army in Kutch in the summer of 1965 and concluded that its superior armour and artillery were more than a match for India's. In 1965 Pakistan had better guns with longer range than India (155 mm versus old Indian 25 pounders) and better tanks (Patton versus India's Sherman/Centurions). Pakistan wanted to exploit its technological edge before Indian re-armament caught up with it.

The Indian leadership since Nehru's time was alive to this Pakistani thinking and practiced 'deterrence' by holding out the threat of general war. On August 9, 1951, Nehru at a public meeting in Delhi, said, 'If Kashmir is attacked, war will not be confined to the hills of Kashmir but will spread to the whole of Pakistan.'

Shastri on the floor of Parliament on April 28, 1965 (in context of the Kutch incident) warned Pakistan that any attack on Kashmir would be regarded as attack on India and India would retaliate at a time and place of its choosing.

Unfortunately, Pakistan did not believe that India meant what it said.

As late as September 4, 1965, Ayub Khan believed that India would not cross the international border and attack Pakistani Punjab. This has been quoted by retired Air Marshal Asghar Khan (First Round Indo-Pak War 1965, page 6). I was told by a subedar of the Pakistan's Baluch regiment that on the morning of September 6, 1965 when Indian troops began advancing towards Lahore, his battalion posted there was doing its regular physical training and the troops literally ran in their PT kits to man the defences to Lahore.

The Indian troops not only held their posts but went on the offensive and with very little superiority in numbers, through sheer grit and determination captured several mountain peaks in the Tithwal, Uri and Poonch sectors.

The culmination was the capture of the strategic Haji Pir pass on August 28, 1965. With its bid of fomenting a rebellion in the Kashmir valley a lost cause, its infiltrators on the run and the Indian Army capturing key posts across the ceasefire line, Pakistan in a desperate measure launched a full-fledged tank-led assault in the Akhnoor sector to isolate the Rajouri Poonch area since at that time the only bridge on the Chenab river and the only road to Poonch passed through Akhnoor.

India was at a geographical disadvantage in that area and escalated the conflict by using air power to stop the Pakistani advance in the Akhnoor sector. Since Pakistan had launched its army against Kashmir, India made good its threat and on September 6, 1965 crossed the Wagah border and began an advance to Lahore.

The 1965 war teaches us that war by escalation is a real possibility. Despite clear threats, Pakistan never believed that India would ever cross the international border. In the age of nuclear deterrence, this failure to deter Pakistan is the central lesson of 1965.

Colonel Anil A Athale (retd) is a military historian and served at the War Studies Division, ministry of defence.