'It must be rendering Modi, Amit Shah and Adityanath speechless that the Indian diplomat who lifted the Azhar trophy at the UN in New York is also a Muslim.
'Yes, this is the wonder that was India,' says Ambassador M K Bhadrakumar. As patriotic Indians, we savour this moment as we hear the good news that the United Nations is blacklisting Masood Azhar as a global terrorist. The country applauds India's diplomats who have finally clinched the issue through quiet, patient, dedicated work.

On a personal note, it makes me feel proud of my erstwhile colleagues in the Indian Foreign Service.

However, before we move on later today, inevitably, to the fateful final lap of the general election that would decide the destiny of India, we must realise that there is life beyond Azhar. Three things come to mind.

First, it is easy to exaggerate the significance of what happened at the UN in New York on May 1. The issue has been played up in the recent year or two in a way that it became an emotive issue. But emotions cloud judgment.

Plainly put, Azhar's designation (or non-designation) does not really add up much. This may sound blasphemy. Yet, the fact remains that in the pantheon of UN's global terrorists, we can spot at least two other equally infamous figures -- Muhammed Saeed and Dawood Ibrahim -- for perpetrating crimes even more horrific than Azhar's hijacking of an Indian Airlines aircraft.

And that made hardly any difference to the quality of their lives. We don't even know whether their UN designation -- Saeed's shortly after the 2008 Mumbai terror attacks and Ibrahim's as far back as 2003 -- dispatched them to retirement. In Saeed's case, most certainly not.

So, Azhar's designation must be put in perspective. Admittedly, it draws attention to Pakistan as a land of terrorist groups, but then, isn't that fairly well-known?

Forever Pakistan seems to dabble in terrorism directed against its neighbours -- Iran, Afghanistan and India -- but forever will the international community have dealings with it.

Being a nuclear power, Pakistan cannot be 'isolated'.

Does Azhar's designation end the terrorist threat to India's national security? No, it may not even significantly reduce the threat.

The unresolved Kashmir dispute will spawn terror groups -- especially, if the government adopts State repression as the only means to tackle the profound alienation in the valley. Old groups mutate while new ones struggle to take habitation and a name.

Even if Pakistan locks up Azhar and throws away the key, it won't substitute for the ineptness of the Indian security establishment. Under the Modi government, terrorism had a field day. The danger lies in deflecting attention from this colossal failure of leadership and create an illusion that Azhar's designation is going to make all the difference.

No, it won't. In the final analysis, the government's security apparatus needs to deliver -- for which, of course, it must be held accountable.

Most certainly, it helps by engaging with Pakistan to reduce the scope of its territory being used by anti-India terror groups. Such an approach may or may not work, but it is worth trying.

Iran's recent experience has been that no matter its conciliatory attitude toward Pakistan, terror groups indulge in cross-border attacks. Nonetheless, Tehran continues to be persuasive and keep channels open to Islamabad.

Second, the denouement to the Azhar file in New York throws underscores the efficacy of quiet, patient diplomacy to resolve even seemingly intractable differences and disputes.

The Modi government wasted much time by indulging in megaphone diplomacy in a campaign primarily focused on embarrassing Beijing publicly and put it to shame to force it to lift the block on Azhar's listing. The pressure tactic failed to work.

Quite obviously, China had its compulsions, too, and it was only possible to address them through quiet diplomacy.

The fact of the matter is that China and India are on the same page in regard of the fight against terrorism and it is far too simplistic to imagine that Beijing is a captive of the China-Pakistan Economic Corridor. Looking back, Delhi's decision to abandon the megaphone diplomacy was the right thing to do.

Third, the Azhar experience throws light on the zen of dealing with China. The Modi government wasted three full years in 'muscular diplomacy'. A rethink was possible only with the shock and awe of a potential confrontation with the People's Liberation Army that loomed in front of us in Doklam.

Through protracted negotiations, the standoff was ended. (The two sides met 18 times, but all in Beijing and not even once in Delhi -- the symbolism was stunning.) The message went home.

Fortunately, there was also a rotation of foreign secretaries around that time -- and an able, astute, self-effacing, authentic 'China hand' took over in South Block in February last year.

The shift was not only in content, but in style too -- from impetuous, vacuous, abrasive, macho style of oneupmanship and grandstanding passing for diplomacy to a mature, interactive, consultative approach toward Beijing geared to build mutual trust and confidence.

Unsurprisingly, this critical shift has taken India-China relations to a more predictable level. The Azhar episode bears testimony to it.

The timing of the Chinese decision could not have been more fortuitous. It clears the deck, so to speak, to launch a new trajectory of relationship under the next government that could be productive, mutually beneficial and far-sighted.

Hopefully, this new climate of relations will help India to approach the key issues ahead with new thinking -- especially, issues such as 5G technology, Belt and Road, etc.

Finally, what matters most at the moment is that these are extraordinary times and every breath we take, every move we make today is related primarily to the general election in our country. There can be no two opinions that the destiny of India as a secular democracy hangs in the balance.

What a splendid sight, therefore, that India's flag carrier at the UN headquarters in New York in this moment of glory over Azhar's designation is Syed Akbaruddin -- 'Akbar' as his friends and colleagues affectionately call this thoroughbred professional.

In the idea of India, this was not meant to be exceptional. Remember that India still cherishes the memory of another Akbar -- the Mughal emperor whose wife also happened to be a Hindu, Mariam-uz-Zamani, mother of Emperor Jehangir, who was born a Rajput princess.

But today, sadly, such things need to be reiterated. Especially, for the benefit of all those rabble-rousing politicians of our country's ruling elite who brand India’s Muslim citizens as suspects with divided loyalty.

The Indian Express newspaper today carried a riveting report by Vandita Mishra from the remote plains of Bihar heaving with untold sorrows, where the electoral battle is being joined. It concludes this way:

'The Modi message fumbles visibly among the scheduled castes still fighting basic fights for land and water who also bear the brunt of the economic distress. The Muslims… are backing the Mahagathbandhan with added determination -- and helplessness.'

'In Manjhi Mianpatti on the edge of Saran, Mohammad Hashim speaks for many: "This is our country, we will die here. We are party of the Indian army too. And you say to us, go to Pakistan! Why do you come to our doorstep and chant 'Jai Shri Ram'? Why do you call us unpatriotic? Why does the PM call himself chowkidar, who is he guarding, from whom? We don't want jobs, we'll make our own living, but at least let us live in peace."

It must be rendering Modi, Amit Shah and Adityanath speechless that the Indian diplomat who lifted the Azhar trophy at the UN in New York is also a Muslim.

Yes, this is the wonder that was India.

No, Sir, Kerala's Malappuram and Wayanad are not parts of Pakistan. Nor is green synonymous with sedition or Pakistan.

Humankind visualises green as the colour of life, renewal and energy, associated with meanings of growth, harmony, freshness, safety and fertility. It has healing power. 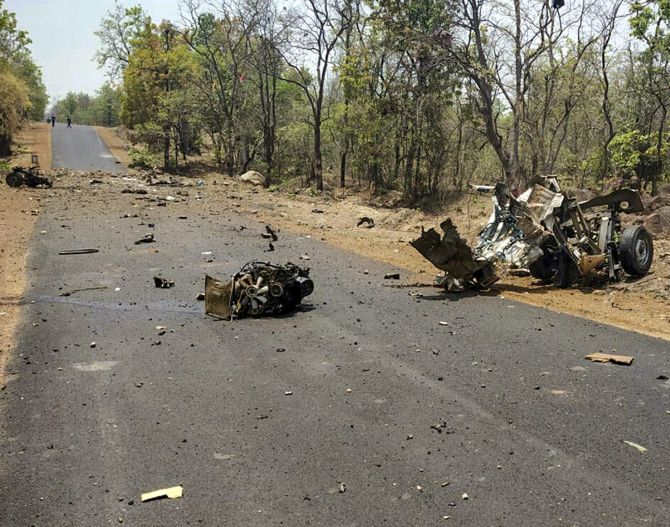