At a time when China is trying to make its foray into South Asia, India should use its shared history to strengthen its ties in the region, argues Dr Rup Narayan Das. 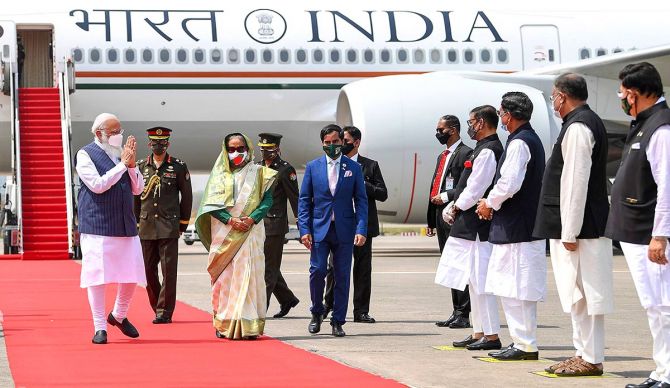 Prime Minister Narendra Modi's visit to Bangladesh to participate in the country's 50th anniversary (Bangladesh was born in 1971) will take the relationship between the two countries to greater heights.

It will be Prime Minister Modi's first visit abroad after the outbreak of the pandemic and testimony of India's policy of 'neighbourhood first'. Earlier, on March 9, he inaugurated the Maitri Setu bridge built over the Feni river that links Tripura with Bangladesh.

India and Bangladesh already have a direct train link between Kolkata and Dhaka through the Maitree Express.

Although geographical proximity, historical background and cultural and linguistic proximity have always fostered traditional friendship and cooperation between the two countries and their people, China's attempts to make inroads into Bangladesh -- in particular, its involvement with Chittagong port -- has been a matter of some concern to India.

It augurs well that the recent visit of External Affairs Minister Dr Subrahmanyam Jaishankar to Bangladesh on March 4 has already created the right atmosphere for a summit-level meeting between Modi and his Bangladesh counterpart, Sheikh Hasina. 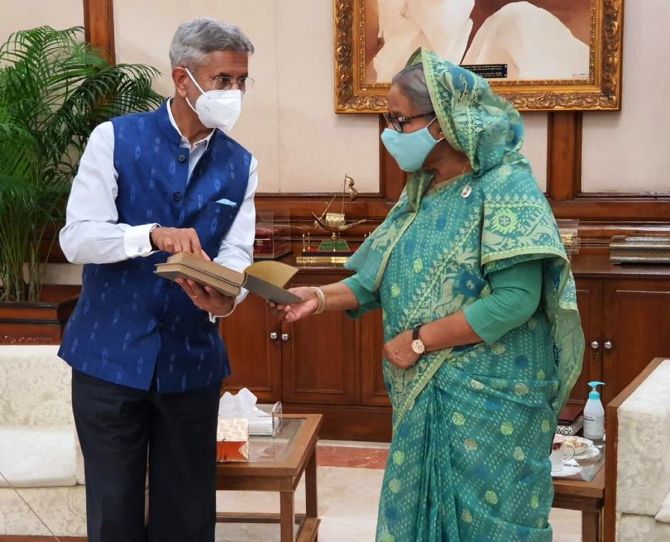 Some positive vibes are emanating from Pakistan also.

India, in a recent goodwill gesture, allowed Pakistan Prime Minister Imran Khan's plane to use India's air space on February 22 to enable him to fly to Sri Lanka.

The ceasefire announcement between the two countries on the same day is yet another baby step towards repairing the precarious relationship between the estranged neighbours.

What has added further traction to the difficult and complex relationship between the two countries is the recent meeting of the Indus Water Tribunal, which was held on March 23-24.

India's offering the COVID-19 vaccine to Pakistan is another instance of its goodwill gesture showing that blood is thicker than water and above the transactional relationship which Pakistan shares with China. The normalisation of India's relationship with Pakistan is, however, contingent upon many factors; the moot question being who rules Pakistan? The civilian government in Pakistan is dictated to by the Pakistan army. The ISI and China are spoilers of any improvement in India-Pakistan relations, notwithstanding China's claims to the contrary; deception being germane to China's strategic culture.

While speaking at the Islamabad Security Dialogue recently, Imran Khan extended an olive branch to India. Soon after, Pakistan's chief of army staff General Quamar Javed Bajwa echoed Imran Khan's positive vibes, saying that it was time to 'bury the past and move forward'.

India will take these words with a pinch of salt and adopt a calibrated response to give peace a chance.

The historical, cultural, linguistic and emotional continuity in the three countries of the subcontinent is a fact of history that cannot be ignored and continues to be the cementing bond among the people living across the border.

The nostalgia belongs to the subcontinent as a whole and not to India alone. The message from the past is loud and clear.

The subcontinent not only has a shared history, shared geography and a shared language and culture but also a shared destiny.

Harappa, where the Indus civilisation flourished, is situated 100 miles north-west of Lahore; Mohenjo-daro is located 200 miles from Karachi.

It is time for us to take a pause and introspect our shared past and the legacy of our freedom struggle, which the entire subcontinent fought together.

The pangs of Partition -- so movingly captured by Khushwant Singh, himself a witness of that terrible event, in his much-celebrated book Train To Pakistan -- was as poignantly felt in India as across the border in Pakistan. The clarion call for freedom mesmerised the subcontinent for about a century.

The entire subcontinent from Lucknow to Lahore, Champaran to Chittagong, Peshawar to Patna and Karachi to Kanpur took part in the protracted and sustained struggle.

Lahore not only witnessed many historic Congress sessions -- which opened the flood gate of mass uprising and unrest against the British Raj -- but also the supreme sacrifices made by martyrs like Sukhdev, Bhagat Singh and Rajguru who were executed in the Lahore Central Jail in 1931.

The historic city also witnessed the martyrdom of Lala Lajpat Rai, who died in a police lathi charge in 1928.

If the momentous declaration of Purna Swaraj adopted at the Lahore Congress on January 26, 1930, galvanised the entire subcontinent, the Karachi Congress of 1931 articulated in no uncertain terms the political and economic content of the Constitution.

The late Gandhian, Khan Abdul Ghaffar Khan, or the Frontier Gandhi as he was affectionately called, started the volunteer brigade Khudai Khidmatatgar in the North West Frontier Province in present day Pakistan.

If Surya Sen of the Chittagong uprising of 1930 so did Jyotindranath Mukherjee, popularly known as Bagha Jatin. He was born in undivided Bengal and made an abortive attempt to wage an armed rebellion in association with M N Roy in 1915 during the First World War, with Germany's support.

Chittagong proved the curtain-raiser for an intense wave of terrorism in Bengal, with no less than 56 incidents of reported in 1930 as against 47 for the entire decade 1919-1929.

Tagore has the unique distinction by composing the national anthem of the two countries -- India and Bangladesh.

If his Jana Gana Mana is the ovation to the motherland India, so does the patriotic note of Amar Shonar Bangla evoke the fervour of Bangladeshi nationalism.

The life and times of Kazi Nazrul Islam was an eloquent statement of a spiritual convergence of the Muslim and the Hindu communities in their common endeavour to attain political freedom for India.

Though born in Burdwan in present day West Bengal, Kazi Nazrul Islam is held in high esteem as the national poet of Bangladesh.

At a time when China is trying to make its foray into South Asia, India should be more proactive and engage with the region.

New Delhi can toy with the idea of reviving the defunct South Asia Speaker's forum to engage with the members of South Asian parliaments.

The meeting was graced by Prime Minister Modi who engaged with IPU President Duarte Pacheco of Portugal. The meeting was a statement of India's soft power, democracy.

The IPU president reiterated Portugal's support for UN reform and India's demand for permanent membership in the UN Security Council.

If Quad stood for the shared values of democracy, the IPU special meeting reinforced the imperatives of democratic values.

Dr Rup Narayan Das is a senior fellow of the Indian Council of Social Science Research at Indian Institute of Public Administration, New Delhi. The views in this column are personal. 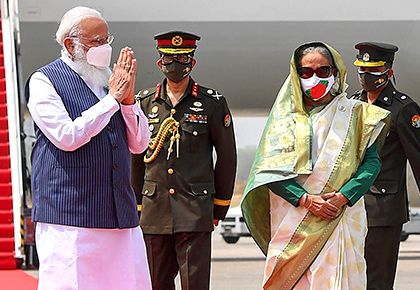