India has entered a 'demographic sweet spot' with half of its population being under the age of 29.
This 'demographic dividend' is likely to last for 2-3 decades and provides the government a unique opportunity to harness the vast potential of India's youth, points out Raj Kishore Mishra, the former civil servant turned development professional. 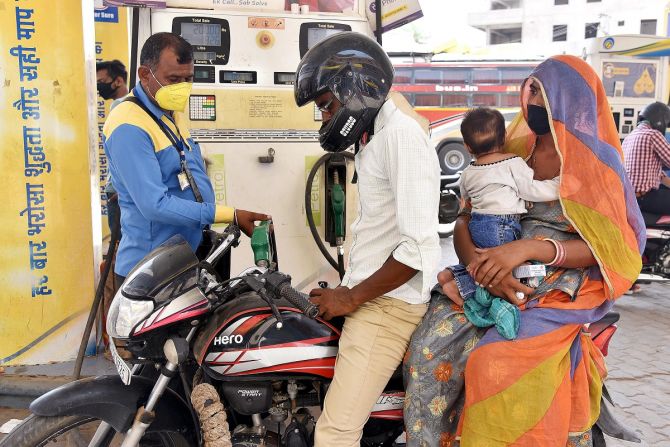 Today, July 11, is World Population Day, an annual event proclaimed by the United Nations Development Programme in 1989 when the world population was estimated to have touched the 5 billion landmark.

The observance of the day broadly aims at creating awareness among the people about issues relating to population such as the importance of family planning, sexual and reproductive health and rights (SRHR) of young people, gender equality, poverty and, above all, human rights.

This year, the day is being observed under the shadow of a devastating COVID-19 pandemic that has put the health infrastructure of countries under severe stress, besides affecting vulnerable sections of the population the most.

The good news for India, however, is that the country has entered what is being described as a 'demographic sweet spot' with half of its population being under the age of 29 years.

More heartening is the fact that this 'demographic dividend' is likely to last for 2-3 decades.

Yet another piece of good news is that India's population growth is well on its way to stabilisation. The Total Fertility Rate (TFR) currently stands at 2.2 and is likely to the reach replacement level of 2.1 soon.

This provides a unique opportunity for the government to formulate appropriate policies and implement suitable programmes, with an emphasis on gender equity and justice, so as to harness the vast potential of the country's youth.

Access to education, skills, entrepreneurship and employment opportunities, besides sexual and reproductive health will have to be the cornerstone of such policies and programmes.

A critical analysis of progress made in these areas presents a mixed picture. While enrolment in primary and secondary schools have shown a continuous uptick, learning outcomes have remained a matter of serious concern. Same is the case with drop-out rates in higher secondary schools, particularly among girls.

In the domain of skill development, a lot of focus has been given in recent years (for instance, the creation of a separate Ministry of Skill Development and Entrepreneurship; setting up of the National Skill Development Mission etc) to impart and upgrade employable skills of the youth.

Yet, the mismatch between available skills and jobs continues to plague Indian industry as has been brought out by surveys undertaken from time to time.

On the employment front, as per estimates of the International Labour Organisation, unemployment rate among the youth in India has hovered around the 22% mark in the last decade. The situation is expected to have been further exacerbated by the COVID-19 pandemic.

According to the Centre for Monitoring of Indian Economy, nearly 27 million youth aged between 20-30 years lost their jobs in April 2020 in the wake of the stringent lockdown imposed to contain the first wave of the pandemic.

Another facet of employment in India -- the labour participation rate -- has always been skewed against women. From a high of around 30% in 1990, female participation rate has been progressively going down and is currently estimated to be about 21%.

The domain of health in general and SRH in particular also throws up a mixed picture. Among the positives are improvement in contraceptive use and rates of institutional delivery in most states and an appreciable decline in the maternal mortality ratio.

Initiatives such as the present government's Beti Bachao Beti Padhao have also sought to dismantle gender stereotypes and deeply entrenched social norms. Yet, serious challenges remain to be overcome to achieve gender equity and ensure universal access to SRHR as mandated under the Programme of Action of the 1994 of the International Conference on Population and Development.

These relate to girls marrying too young, besides inadequate information and access to SRH services for adolescent girls (15-19 years) resulting in a high percentage of unwanted and unintended pregnancies.

In addition, the National Family Health Survey (NFHS) 5, Phase I covering 22 states and Union Territories has revealed some disturbing trends in respect of increased prevalence of severe malnutrition, both among adults and children, and increased anaemia levels, also among children and their mothers.

A combination of relatively poor indicators in the domain of education, health and gender equality, among others, explains why India has consistently been faring poorly in the United Nations Development Programme's Human Development Index and why it has gone down by two places in the latest edition.

It is also a matter of concern that the country has slipped 28 places to rank 140 among 156 countries in the World Economic Forum's Global Gender Gap Report (2021).

In conclusion, the underlying philosophy behind the observance of World Population Day and the facts stated above should prompt the Government of India and those of the states to devote time, energy and resources for the country's young men and women in the areas mentioned above, instead of raising alarmist noises about the need for population control as has been the case in some quarters.

History has shown that coercive measures to control population by laying down one/two child norms are counter-productive in the long run.

The need of the hour, therefore, is to empower youth in the reproductive age to have informed choice in the matter of raising a family by ensuring access to education, skills, employment and SRH services.