News
Business
Movies
Sports
Cricket
Get Ahead
Money Tips
Shopping
Sign in  |  Create a Rediffmail account
Rediff.com  » News » Rahul as PM in 2019? Why ever not! 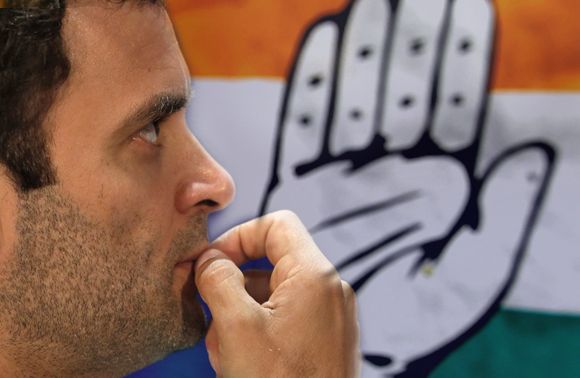 What is the road ahead for Rahul Gandhi? Shehzad Poonawalla offers a blueprint.

Post his 56-day sabbatical, a rejuvenated Rahul Gandhi has emerged on the political scene and made his presence felt. From interactions and padyatras with farmers to the wittily crafted 'suit boot ki sarkar' jibe in Parliament to target the Narendra Modi government on more than one occasion, Rahul Gandhi is pulling off a strategy that the Bharatiya Janata Party had employed with great finesse during the 2014 Lok Sabha campaign -- "always control the narrative”.

To Rahul's credit, as part of this strategy, he has not only started talking to the media and obliging it with delectable sound bytes, particularly journalists covering the Congress and parliamentary beats, but has also got his office to join the popular social media platform Twitter, something that the likes of Shashi Tharoor and Digvijaya Singh had been arguing in favour of, given their own success stories in being able to galvanise media space and audiences through it.

Rahul Gandhi deserves some credit for making the Congress party, which was reduced to a historic low of 44 seats, look and sound like a charged-up opposition party, which highlights issues catering to the larger public interest. The floor strategy in the Rajya Sabha by the Congress using its numbers, backed up with strong articulation by Ghulam Nabi Azad and Anand Sharma, has been to stem the majoritarian onslaught on display in the Lower House by the Modi government.

And while these are important battles that the Congress has won under Rahul's leadership, there is a threefold war that he needs to now fight -- organisational, ideological and perceptional. It is here that he will be required to marshall all his skills as a leader. Rahul, as vice president of the party, will have to begin charting a course which the party can be tread upon, when he takes over as president of the Grand Old Party in the near future.

Firstly, there is a dire need to overhaul the party organisation to weed out non-performers and replace them with stronger regional faces. The party offices need to be rejuvenated and energised by getting all the state, district and block level committees filled with competent office-bearers, preferably young and energetic ones, with basic skills of organising and oratory. These office-bearers need to be provided with infrastructure to take forward the political battles that Rahul initiates at the national level.

States could be divided into categories depending on existing strength, vote-share and proximity to elections. States like Gujarat, Rajasthan, Madhya Pradesh and Maharashtra, where the Congress's state wing still has the ability to put up a strong fight and elections are a few years away -- the party has already appointed leaders who have a good grass-root connect and wide acceptability as party chiefs. They need to be given time, flexibility and resources.

States like Jammu Kashmir, Chhattisgarh and Jharkhand where the performance of the party has not been as inspiring as it could be for some time now, the organisation must be pumped with a new lease of leadership. States where the party is in power -- Uttarakhand, Karnataka, Kerala, Himachal Pradesh etc -- Rahul and his crack team must ensure that there is ample co-ordination between the state government and state unit to ensure there is no disenchantment among workers and that the state unit derives the necessary resources to expand its base.

States where Congress is relatively weaker today -- Tamil Nadu, Uttar Pradesh, West Bengal and Bihar and where elections are just around the corner, in a year or two -- Rahul will have to take a political call whether the party must start re-building before or after the elections. If the answer is the latter, then he should start finalising potential alliances in these states with regional satraps like Mayawati, Mulayam Singh Yadav, Mamta Banerjee, the Left or the newly-formed Janata Parivar with a clear objective of stopping the communal forces from gaining ground. Rahul should not hesitate in engaging the counsel of his mother and senior leaders like Ahmed Patel, A K Antony, Digvijaya Singh and others to finalise seat-sharing, power-sharing arrangements and common minimum programs.

One state that Rahul Gandhi needs to focus on, at high priority is Punjab. With disenchantment rising against the Akali Dal, the state looks set to come back to the Congress in 2017 provided internal factional fights do not stretch beyond a point. The Aam Aadmi Party, which has its own internal issues, had done very well in Punjab during the Lok Sabha polls and will look at consolidating its gains in the assembly elections if they choose to contest.

Internal fighting and the rise of AAP as an alternative can prove to be a spoiler for the Congress in securing a win in Punjab. In Haryana, some dissent is also emerging among factions of the party. Though elections are due only in 2019, the earlier Rahul Gandhi steps in and cracks the whip, the better. He must assert his authority and should get the organization to be a consolidated fighting unit.

An idea that Rahul Gandhi must also think about seriously, is to transform the party into a cadre-based one. Unfortunately, the Seva Dal has not been able to play the role that the Rashtriya Swayamsevak Sangh plays in nurturing a committed social base for the Bharatiya Janata Party. While Rahul Gandhi would surely take forward the idea of open democracy in the party, that will help connect the grassroots with the party power structures, something that he has turned into reality in the Youth Congress and student wing National Students Union of India, it would also be pertinent for him to consider the idea of arming the electoral machinery of the Congress with a social movement based cadre generating system.

On the ideological level, Rahul Gandhi seems to have some promising ideas. While he continues to maintain a left-of-centre and pro-welfarist economic line, taking up farmer related issues like land acquisition, that affect over 60 per cent of the population, he has also reached out to the middle class home-buyers and youth by talking about the Real Estate Regulatory Bill and by intervening in Parliament on net neutrality, that concerns crores of netizens who had heavily supported Modi in the last election.

He must remember that the scores of young voters who constitute a large chunk among the floating vote, are aspirational in political instinct and hence his positions on the economy must reflect their concerns about growth and jobs as much as it reflects concerns for social welfare. Leaders like Shashi Tharoor, Milind Deora, Jyotiraditya Scindia, Sachin Pilot and others are credible faces among the young and middle classes must be taken on-board in a big way to identify issues and shape narratives.

With businesses also feeling let down by the lack of  reforms and the poor economic performance on display by Modi in his first year, this is a captive audience that Rahul Gandhi can win over instantly if he speaks their language. After all, the Congress has never been anti-business or anti-growth. In fact, it has ushered in the first generation of financial reforms under Dr Manmohan Singh and given India its fastest growth rates! Why should Rahul Gandhi not partake from that legacy as well?

When it comes to an ideological positioning on the socio-cultural narrative, Rahul Gandhi's recent 16 km 'religious trek' to Kedarnath has helped in endearing him to a section of Hindu conservatives that believe, mostly because of the BJP's clever propaganda, that the Congress indulges in minority appeasement.

To be honest, the Congress did get that bit wrong in the run-up to the general elections. On the one hand it was perceived to be courting worn-out Muslim faces like the Shahi Imam Bukhari of Jama Masjid and on the other hand young, educated liberal Muslims seemed disenchanted with the Congress. Despite its 'secular' image, a bulk of the minority voters, traditional supporters of the party, had chosen alternatives like the Aam Aadmi Party. They did so during the Delhi elections too and the Congress lost the few seats it had won in the 2013 Delhi assembly elections.

Rahul Gandhi will have to change the discourse when it comes to approaching minorities. Today, minorities do live in an atmosphere of insecurity but they have aspirations that go beyond identity. For instance 65 per cent Indian Muslims are below the age of 40, just 4 per cent are graduates. Less than 2.5 per cent make it to the civil services. These are the issues -- of education, jobs, health, civil rights and discrimination -- Indian minorities want the Congress party to address.

Rahul Gandhi will have to replace the old Muslim faces with young energetic ones that represent a liberal Nehruvian ethic and connect with community on issues. Jawaharlal Nehru during his years had opted for a progressive Maulana Azad, not some worn-out cleric or disconnected leaders who have no idea about the churning within the community.

Rahul Gandhi will have to move quickly on this given the rising popularity of the All India Majlis-e-Ittehadul Muslimeen among Muslims. Not only has Asaduddin Owaisi's party proved to be a spoiler for the Congress in Maharashtra, but it helps BJP in polarising the electorate with its own radical views. This is not only dangerous electorally for the Congress party but far more threatening to the secular polity of India. Rahul must re-orient the Congress's 'secularism' towards Nehruvian pluralism, which can carry forward both the majority and the minority community in harmony, on the plank of progressivism, liberalism and inclusive development.

Finally, when it comes to the perceptional war Rahul Gandhi cannot afford to repeat the mistakes the Congress made during the Lok Sabha campaign. From doing the wrong TV interviews to selecting incompetent spokespersons, from a below average social and digital media strategy to a running a directionless yet expensive advertising campaign (TV, radio, print and outdoor), every step taken, whether by the media managers of the party or the United Progressive Alliance government, was disastrous.

Today, a large amount of political capital of the Gandhis has got eroded only due to such faulty strategies. Competent people with an understanding of new media need to replace the archaic, bureaucratic systems of the party that churn out one nondescript press release after five hours of a vicious attack on somebody as important as Robert Vadra, son-in-law of the Congress president, during an election, thereby allowing propaganda to go unchallenged in the interim and dominate the media discourse.

The larger issue of media ownership and control needs to be looked at and dealt with as well. This is something that only 10 Janpath or 12 Tughlaq Road can do. Narendra Modi as PM has appointed Arun Jaitley, the finance minister and corporate affairs minister to handle the I&B ministry. There is an underlying message to read there, given the corporate ownerships of the media and Jaitley's extensive connections.

Only a leader like Digvijaya Singh or Ahmed Patel, with backing from Rahul Gandhi, can actually ensure that media ownership patterns do not play a role in editorials as they seem to be doing today. While elections won't be won or lost solely on media and social media management, it is an increasingly important aspect given the growing the reach of satellite TV and smart phone internet users in India.

Rahul Gandhi, in his early days as an opposition leader, has shown promise and energy. But this is a long fight that requires him to stay the course, be consistent in chipping away the support to the Modi government little by little and most importantly get the Congress party's own house in order. 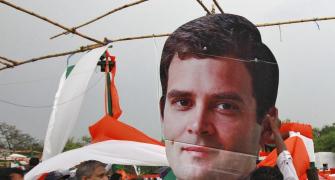 Why Rahul Gandhi needs to be careful 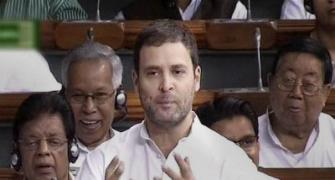 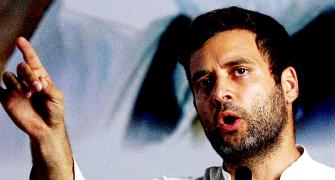 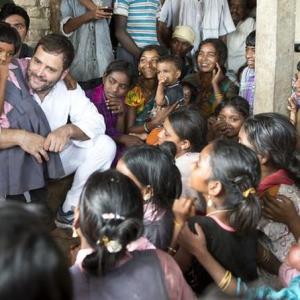