News
Business
Movies
Sports
Cricket
Get Ahead
Money Tips
Shopping
Sign in  |  Create a Rediffmail account
Rediff.com  » News » Pulwama: Why I can cry no more

Pulwama must become the defining moment in our fight against terror, effecting a sea change in our mindset.
The erratic, blow hot blow cold, approach, the hallmark of our anti-terror-Pak-Kashmir policy must end.
In its place is required a pragmatic, comprehensive, robust hardline course that is relentlessly pursued even in times of relative calm until the final objective is met, namely the eradication of separatism and the total annihilation of terror, says Vivek Gumaste. 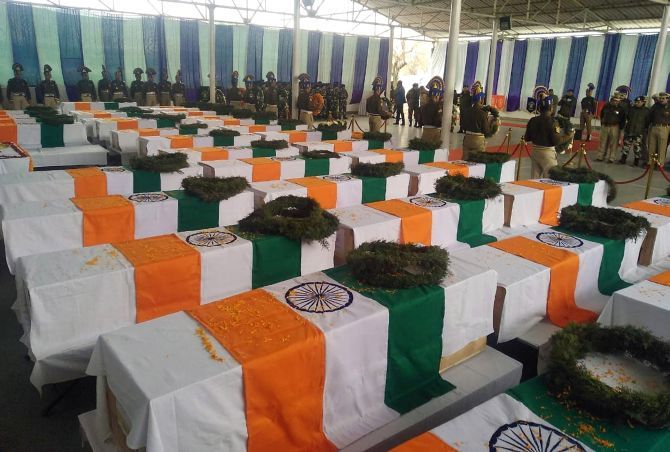 I am not going to shed tears for the 44 Central Reserve Police Force personnel killed by a Jaish e Mohammed suicide bomber in Pulwama on February 14, because I don't have any more tears to shed.

The vault is empty, the riverbed has run dry from a mountain of mourning.

Tears flowed freely when 259 Indians were blown to smithereens by 12 coordinated bomb blasts in Mumbai in 1993, when 209 died in the train bombings of 2006, and when 171 people were gunned down during 26/11; more recently Pathankot, Uri and now Pulwama -- where can I begin and where do I end; the list is endless. I can cry no more.

My senses have become numb. Widespread public anger fails to spark the nascent anger inside me. The exhaustion is total: Mental, physical and emotional; an apathy cemented by the prescient futility of such outbursts.

Will the grief, the rage and inflammatory words, all fade into oblivion a few days hence with no tangible results like all other prior attacks -- that is the million dollar question.

We need to move beyond the emotional catharsis, the futile self-glorifying traits of restraint and resilience and the vacuous threats of retaliation to formulate a more cogent, muscular and long-lasting policy against Pakistan-orchestrated, Kashmir-inspired terror.

Our Kashmir policy is an unmitigated disaster; a self-destructive rumination of failed ventures with no corrective innovation -- all stemming from a flawed psyche.

Let us face it, we are a gullible, soft State with a cringing mindset, prone to mawkish sentimentalism and easily swayed by abstract notions of harmony and forgiveness even in the face of hostile intentions. Our core intellectual assumptions are faulty and strong decisive action is missing.

Pulwama must become the defining moment in our fight against terror, effecting a sea change in our mindset.

The erratic, blow hot blow cold, approach, the hallmark of our anti-terror-Pak-Kashmir policy must end. In its place is required a pragmatic, comprehensive, robust hardline course that is relentlessly pursued even in times of relative calm until the final objective is met, namely the eradication of separatism and the total annihilation of terror.

The panacea for this multi-faceted scourge perforce must be multi-pronged, encompassing surgical military action, coercive diplomacy and firm political intervention at home.

In the emotionally surcharged atmosphere of post-Pulwama, the military option must take ascendancy for optical as well as strategic reasons; the primary objective being to seek and destroy terrorists and their safe havens in Pakistan with a finality that makes Pakistan second-guess its diabolical adventurism.

The missive to terrorists must be clear: We will hunt you down wherever you are, whenever we want, and however we choose to do so. This is the only language that our detractors understand.

Kandahar was a fiasco not because we traded terrorists for the precious lives of our citizens, but because we failed to track down and eliminate the culprits later -- a lack of determination so vital for success.

Coercive diplomacy is already underway with India rescinding Pakistan's MFN status and raising tariffs on Pakistani imports. But the noose must be tightened further, even if it means throttling Pakistan's water supply in contravention of the Indus Treaty.

For immediate effect the Indus Treaty talks must be deferred and plans for damming the Indus waters must be explored as a long-term strategy. No international obligation can trump the obligation to safeguard our people.

In tandem with military and diplomatic initiatives, we need to alter the internal dynamics of Kashmiri politics that serves as a catalyst for cross-border terrorism.

Terrorism does not sprout in a vacuum; a deep-set ideology incites vulnerable individuals to violent deeds. The seeds of hatred in Kashmir can be traced to a fundamentalist religious schism that has emerged over the years in this ancient Hindu land forcibly transformed (by coercive conversions and ethnic cleansing) over the centuries into a Muslim majority hegemony; in short, a suffocating socio-political climate at odds with our pluralistic tradition and our secular Constitution.

Lending false credibility to this movement is Article 370 which confers special status on Kashmir. Article 370 keeps Kashmiris trapped in a box, stymieing their growth, deters other Indians from investing in the state thus perpetuating its economic penury, and hinders the understanding of India and other Indians by a dearth of free interaction; all under the false illusion of preserving a parochial identity.

Kashmiryaat is a cultural attribute (like Gujarati or Bengali) and not a political identity. Our ancient tradition in concert with constitutional stipulations provide adequate protection to local cultures and negates the need for Article 370.

Psychologically and practically, Article 370 is the single most important barrier in this conundrum; its abrogation will go a long way in bringing Kashmir into the mainstream, allow its fiscally disadvantaged youth to partake of India's progress and steer them away from violent rebellion.

Capitalising on the current national anger and unprecedented unity, the government must call an emergency session of Parliament and scrap Article 370, once and for all.

Political activism is an intermediate step in the dangerous transformation of an ideology into terrorist violence and must be curbed. Occupying this space in Kashmir are two broad faculties: The overtly pro-Pakistan Hurriyat, and the supposed mainstream political parties like the National Conference and the PDP.

Political activism, advertently or inadvertently, complements terrorism. The nexus is inescapable despite the sanctimonious protestations of the former.

It is imperative that the political narrative in Kashmir undergo a drastic 180-degree redaction. A distinction between soft and hard separatism is redundant.

Separatism is separatism, period, and unacceptable within the political dialogue of sovereign India.

We are at a crossroad in this difficult conflict and must draw a line in the sand. First, the Hurriyat must be outlawed and its leaders interned with no scope for mischief.

Second, an unambiguous message must go out to the two mainstream political parties in the valley: 'We are all Indians and we live by one law as equal citizens of a pluralistic, secular nation. There cannot be a compromise on that and there never will be. Accept this proviso as 1.3 billion Indians of multifold linguistic communities, varied religious persuasions and different ethnic cultures have done.

'Specifically, disown the concept of autonomy once and for all, cut your links if any (real or symbolic) with Pakistan and work within the system for the betterment of Kashmiris -- that is the only path.'

'If not, we will move ahead without you as the Idea of India cannot be jeopardised and we cannot allow 7 million people to hold 1.3 billion Indians hostage. The choice is yours.'

To conclude, daring cross-border operations, intense security surveillance along the border and firm political re-direction at home must be the key elements of a revised Kashmir policy which must be carried out with a single-minded unflinching determination (no succumbing to international pressure or internal dissension between successive governments) till the objective is fulfilled -- the total annihilation of terror within our borders.