It is a waste of time to speak up in today's India, believes Syed Firdaus Ashraf. 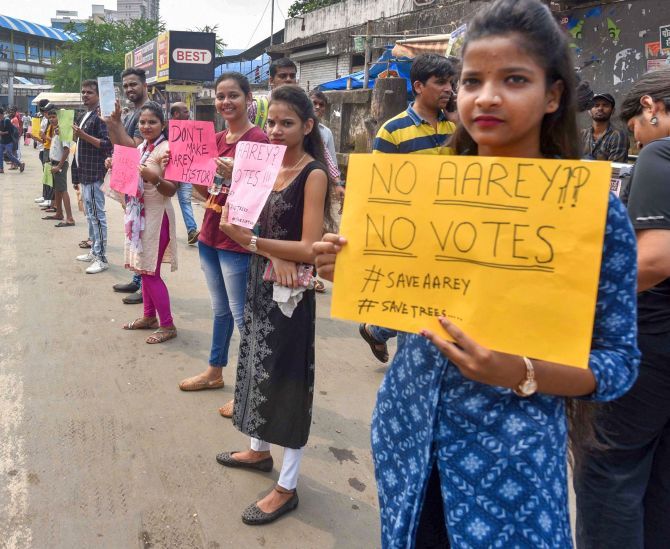 IMAGE: Protestors stage a rally against the cutting of trees in the Aarey forest for the proposed metro car shed in north west Mumbai. Photograph: PTI Photo

Until three years ago, I did not encounter prashasan, the Hindi word for administration.

I have since been prostrating before the prashasan saheb every day.

My encounter with the prashasan began with the news that the Mumbai Metro-3 was beginning its work in Mahim, north central Mumbai, where I live.

I was told property prices would skyrocket once the metro started functioning as one of its stations was to be located near my home.

We would have better connectivity and acche din would be a reality.

Little did I realise that my unending ordeal was about to begin.

First, the prashasan chopped off nearly a dozen trees on Lady Jamshedji road where the metro station was to be located.

The iconic Crown Bakery, which served one of the best mawa cakes to Mumbaikars for more than five decades, was bought over by the metro prashasan and shut down.

Another shock came after metro officials brought in huge boulders and drilling machines to bore through a tunnel, that rattled my 70-year-old building non-stop.

When the building's occupants protested, the engineer in charge firmly told the residents that they could protest all they wanted, but the work would not stop.

'We will go to the police,' one resident threatened.

'We will go to court,' another resident threatened.

"The work will begin at 6 am sharp and stop at 10 pm. You have no option but to accept this," the engineer issued his farmān.

"Are you God?" an angry resident shouted.

"No. We are the prashasan," the engineer replied calmly.

"Prashasan ko jo chahe, usse milta hai. Aap log kuch nahi kar sakoge (the administration gets what it wants. There is little you can do)," he said.

Then, offering some consolation, he said he would install vibration meters to check if our building was in danger of collapse.

'What about noise pollution?' one resident inquired.

'We cannot help it, we are the prashasan. The metro is to be built and it will be built by 2022,' the babu declared.

Next in line to crumble before the prashasan was Raj Thackeray's Maharashtra Navnirman Sena.

The prashasan zeroed in on a playground in the neighbourhood for metro-related work.

The MNS decided to act against the administration, but the prashasan babu shut up the party workers by showing them handover documents of the ground from all government agencies.

He would give the playground back after 2022, the babu promised, but right now everyone would have to shut up.

The MNS workers dispersed and the playground has been taken over for metro work till 2022.

One day, the prashasan babu called a meeting of residents and informed us that the building had been weakened because rats had dug in very deep.

The babu asked us to not to use one of the rooms facing the main road for the next six weeks as metro staff would dig deep to repair a damaged pillar.

The prashasan babu said there was no danger to the building but an additional pillar had to be put up for our safety.

Some residents shouted at the prashan babu and his team that the prashasan was responsible for the damage to our building by digging 100 feet underground for the metro.

'Please give in writing that you do not want to repair your building,' the prashasan babu responded.

A journalist friend said I must report the incident to a local newspaper.

"This is injustice," he said. "The Metro is doing dadagiri and you are bowing down to them."

Thanking my friend for his sage advice, I told him we had agreed to the prashasan babu's demand that we not use the room facing the main road.

The work was completed after many days, we were relieved that the prashasan did not charge us a rupee for the repairs though we never did find out if rodents had indeed damaged the pillar of our building.

I recently met a retired engineer who had returned after a two month stay with his son who lives on the West Coast in the US.

He said he was planning to emigrate to the US.

Late in life, he said he realised that Indians have misused democracy.

Indians don't deserve democracy, he declared. There is no discipline. People jump traffic lights and never follow the rules.

'We Indians need dictatorship, only then will our country improve,' the retiree reiterated.

The prashasan is already functioning as a dictatorship in our area, I muttered.

Thanks to the prashasan, protest has lost all meaning.

You can speak, but you won't be heard.

And if you continue to speak up, you will pay the price.

Protestors discovered this when they protested against the cutting of trees in the Aarey forest and encountered the iron fist of the prashasan.

Oh, it is senseless and a waste of time to speak up in today's India. 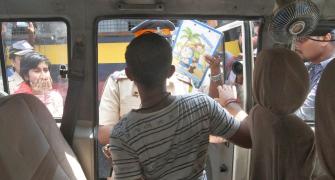 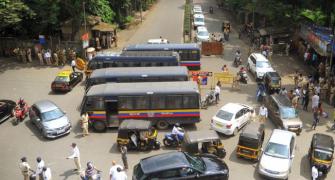 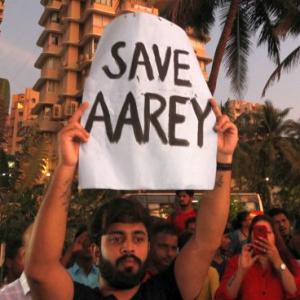