By T P Sreenivasan
November 06, 2010 11:07 IST
My heart is with you, and so are the hearts of many others in India, says T P Sreenivasan welcoming Barack Obama to India.

The first of the distinguished diplomat's daily takes on the presidential visit.

Welcome to India. We are excited about the prospect of receiving a man of destiny not just for the people of the United States, but also for people around the world, who see you as a messiah of change and hope.

We have a stake in your success because, on it depends the advent of a just, equitable and non-racist world. On this Diwali day, when you arrive in India, the brightest light that we see in the horizon is the one you lit in Washington that cold January night in 2008.

Our welcome is spontaneous and unconditional. Your arrival in India itself is historic, regardless of whatever you may or may not accomplish here in the next four days.

We know that you will arrive in India before recovering from the mid-term shock of losing the House and reducing your majority in the Senate. The fact that your predecessors too had to face such defeats may be no consolation for you.

In your case, the amazing fact is that you never received bipartisan support even in your struggle to tackle the national economic crisis or crucial health reform issues.

There appears to be a conspiracy by vested interests to reverse the historic process that brought you to the White House. The trends you have set in foreign policy from Cairo and Prague break new ground for global peace and prosperity and you should have the time to bring them to fruition.

We see hope in your initiatives and we wish you well.

Though the loss of the House is a blow to the Democratic Party and your own Congressional agenda, you will find that the new leaders of the various Congressional bodies will be supportive of your efforts to build a strategic partnership with India.

Some leaders of the Republican party, who shaped President Bush's pro-India policies, will be back in influential positions and this is a silver lining from the point of view of beneficial India-US relations. A new bipartisan approach to India may well be in the offing.

Strategic thinkers on both sides have debated every issue that is likely to come up during your visit and we hope that your mind is not muddled by the prophesies of doom or high expectations contained in those masterpieces.

As one of our former foreign ministers famously said, the visit should be seen in 'directional' and not 'transactional' terms.

As long as you are able to have a frank exchange of views with our prime minister, whom you consider your guru, on strategic issues and reach an understanding on China, Pakistan, and Afghanistan, your visit will be of infinite value.

There is a certain inevitability of success in these areas as neither of us is guided by any desire to subvert or dominate the region. We desire nothing but prosperity and stability for our neighbours as long as they do not work either to inflict a 'thousand cuts' on us or to create a 'string of pearls' to suffocate us.

You are fighting a war not to conquer territory, but to ensure that never again will terrorism engendered in this region threaten lives in the United States. We have been engaged in that battle for more than 20 years and we know the pain and loss, which that struggle entails.

When we urge you to complete the task of eliminating terrorism, we are not suggesting that we are ready to fight the battle to the Last American. Indians, Americans and humanity itself have a stake in ridding the world of the scourge of terrorism. There should be no more Headleys to perpetrate terrorism.

One of the ironies of history is that Pakistan, which has adopted terrorism as a State policy, is your frontline State in your combat against terrorism. The evidence of Pakistan's double game has come from reliable sources in Washington itself. You yourself have spoken about the danger of American equipment and money being used by Pakistan against India.

In these circumstances, blind support to Pakistan for fear of the emergence of rulers in uniform or Taliban outfits will not serve American interests.

For India, it poses grave dangers. A stable, free and democratic Afghanistan is in the best interests of both our countries. A regional rather than an Af-Pak solution should be sought in Afghanistan.

China's assertiveness in the wake of its rise is ominous for both our countries. India still has a vision of global partnership with China as a key element in it. But as long as the festering boundary issue is not resolved, the possibility exists of aggression in the guise of confusion arising out of different lines in different maps.

It was the height of absurdity that China protested when our prime minister visited Arunachal Pradesh. No less serious is the policy to treat Indian citizens from Jammu and Kashmir as though they are from Mars, not entitled to normal consular access.

You have your interests in China, but your visit should demonstrate in some way that the world will expect China to match its power with responsibilities. We are sure that you will benefit from the prime minister's assessment of China as he will from your own analysis.

Unfortunately, the outcome of your strategic understanding with India will not be known either to your people or ours for a long time to come. They are likely to judge your visit on the basis of the transactional aspects of the visit. Your people need jobs and nuclear and defence contracts are very important from their point of view.

You are aware that India is not averse either to nuclear trade or purchase of defence equipment. The liability law was put in place and the Convention on Supplementary Compensation was signed precisely to facilitate nuclear trade with the US and others.

We have clarified that the language of our law has not changed the situation on the ground with regard to liability and that it is consistent with the Convention. It should not be beyond the lawyers on both sides to find a way to begin nuclear trade.

On defence agreements too, the differences seem to be in form and not in substance. But any suggestion of surrender of sovereignty on the use of defence purchases is anathema to the Indian public. You should be able to carry with you good news on both these fronts even if everything is not signed and sealed before November 9.

The Indian wish-list is quite realistic and achievable. No one disputes that sanctions are an anachronism between strategic partners.

How can the entity blacklist be justified when the same entities are engaged in strategic cooperation with the United States?

You say it is complicated, but is it not necessary to remove such anomalies, however complicated they may be?

We are glad that you do not have the power to stop outsourcing, though you prefer to create jobs in Buffalo, not Bengaluru. It is a win-win situation and why not allow market forces to determine the future of outsourcing?

The third wish on the Indian side is to see you declaring from the floor of the Indian Parliament that you will support India's wish to be a permanent member of the Security Council.

We know that it will not immediately open up the door of the Council for us. The process is long and arduous. But the perception in this country is that the US is an obstacle to Indian aspirations in this regard.

You acknowledge the need for reform of the Security Council in the interest of making it representative and reflective of current realities.

There is no better way for you to affirm your faith in India as a partner in global governance than by expressing support to India in suitable terms. India's involvement in international organisations should reflect its role and importance.

More than anything else, you will be an instant hit with the Indian public.

On the same logic, in view of India's new role as a partner in disarmament and non-proliferation, India should be invited to join bodies like the Nuclear Suppliers Group and Missile Technology Control Regime. The world will benefit from India's participation in these bodies rather than just abide by their guidelines from outside.

The very fact that you have come to India at this juncture is significant in itself and even if our respective wish-lists remain on paper for some more time, the directional significance of your visit will not be lost on anyone. But leaders meet to do what bureaucracies cannot do and however complicated these issues are, it should not be beyond the two of you to find ways to deal with them. Success is within your grasp.

The symbolism of your programme is not lost on us. Your stay at the Taj Mahal hotel in Mumbai, your visits to the places associated with Mahatma Gandhi, your visit to Humayun's tomb and your address to Parliament will make an indelible impression on India.

No one who visits India is not transformed by the experience and you will be no exception.

Long before your historic election victory, I was asked who I would vote for if I had a vote. 'My heart is with Obama, but my head is with McCain.' Perhaps, a McCain administration would have been more sensitive to India's concerns. But it is the Obama phenomenon that captured my heart.

My heart is still with you. And so are the hearts of many others in India. Why America is frustrated with India
Complete coverage: President Obama in India 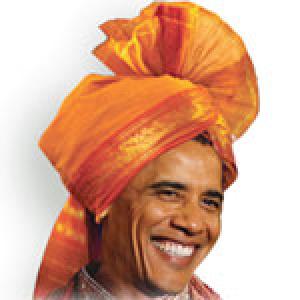