North India has a problem with toxic masculinity

'This is obvious to everyone except those in denial; it is a national shame.'
'To that extent, blaming any particular government is an insufficient response,' argues Mihir S Sharma. 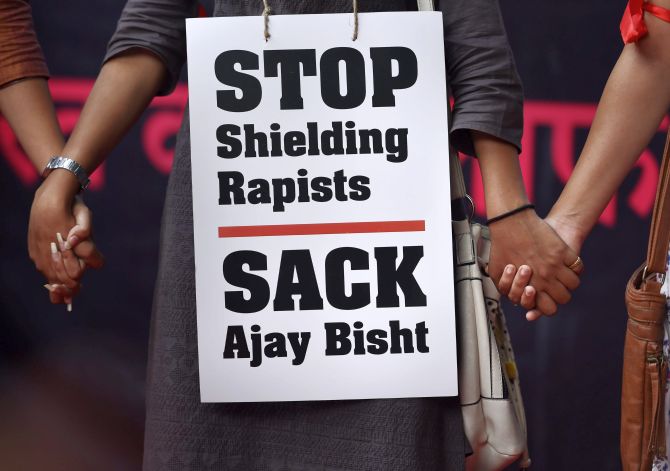 A silent prime minister; a horrific rape; protests at India Gate; arrogant press conferences; outraged social media -- you'd think we were back in UPA-II. You're tempted to throw your hands up in the air and say: The more things change, the more they stay the same.

But look a little deeper at the causes and the reaction to these two incidents of rape, in Unnao and in Kathua, and some similarities and differences to what happened in Delhi in 2012 emerge.

First, one basic point: Violence against women in India, and particularly in north India, is a systemic and socio-cultural crisis.

It isn't just a question of a bad policy that can be switched on and off. North India has a problem with toxic masculinity.

This is obvious to everyone except those in denial; it is a national shame. To that extent, blaming any particular government is an insufficient response.

But behind any particular incident of sexual violence there can be, in addition, other causal influences that might be more or less in a government's control.

With the 2012 Delhi gang-rape, there were two such. The first was that the perpetrators were part of an urban underclass that had been largely ignored by the UPA's farms-first welfare policies.

The second, more immediate policy failure: The culprits picked up the girl and her friend from a well-trafficked public space in a 'private bus'. This reflected poorly on the Congress-led Delhi government's vision for urban spaces and liveability.

Thus to the extent that there could have been a rational anti-government argument underlying the 2012 protests, it would be a demand for more and better public transport; more policemen; more acceptance of women out late in cities. (Instead, the 2012 protests were soon hijacked by the most lumpen aspects of the Opposition.)

But in the Unnao and Kathua rapes, the additional causal influences are substantively different.

In Unnao, the accused rapist, a Bharatiya Janata Party MLA, obviously and arrogantly displays a sense of his own impunity.

The systemic problem, besides violent misogyny: The complete subversion in rural North India of local administration by gangster-politicians or bahubalis across various parties.

The specific political failure: A failure to arrest the accused, collapsing the 'law and order' myth carefully built up by propagandists for Adityanath.

His administration is revealed for what it is: An alliance of local upper-caste toughs who revel in their impunity, and against whom ordinary people have no recourse.

Those who complain are murdered; the accused walk around smiling and free; and cases are not registered even though the Union home minister admits that the law requires it.

There, if possible, the causal narrative is even more disturbing.

The little child who was drugged, repeatedly raped in a temple, and then murdered, was chosen -- according to the chargesheet filed by the J&K police -- deliberately to intimidate her Muslim nomadic community and force them to leave the area.

If so, this was not a crime of opportunity but a planned atrocity, a deeply political act of barbarism.

The systemic problem, in addition to violent misogyny: The build-up, especially by the BJP, of a sense of division between communities and of the notion that a Muslim population is necessarily a cultural and security threat as well as a demographic time-bomb.

Hate-mongering about the Rohingyas, the cynicism of the PDP-BJP alliance, and the past impunity of 'counter-terror' special police officers such as the one arrested in this case, have all contributed in one way or another.

The specific political failures: The enabling of lawyers who prevented the filing of the chargesheet against the accused; and the presence of locally powerful leaders, particularly from the BJP, in a 'Hindu Ekta Manch' march that carried the national flag and protested the arrest of those accused.

Objectively, therefore, the proximate political failures in both these cases are greater than in 2012, and require a more robust political response.

Here the BJP governments at the state and Centre have failed.

Leaders such as Meenakshi Lekhi, who were particularly vocal about the 2012 rape, have instead minimised the importance of these more recent incidents.

A chorus of indignation was arranged to mock the 'silent' Manmohan Singh then; this prime minister, a far more loquacious and communicative politician, has been as silent.

Thus while the atmosphere may feel similar, the differences between 2012 and 2018 should not be ignored.

The BJP has more to answer for, especially given its stand in 2012 and its billboards in the 2014 election campaign that made a political issue of violence against women.

This is another nail in the coffin of the BJP's 'good governance' narrative.

In Unnao, it is clear that it is not a party with a difference; instead, it is as much a party of thugs as its predecessor in power in UP, and perhaps worse because of the explicit upper caste bias in its administrative set-up.

In Kathua, it is clear that unleashing the basest sort of divisiveness, and the identification of violence against minorities with nationalism, is more central to its political mobilisation than any other element.

If 2018's outrage pans out differently, we should all wonder why.