What do you make of the sheer fecklessness of the political class, those men and women that are supposed to be the pillars of our representative democracy? Why are they all seemingly blinded by folly? asks T V R Shenoy

Looking at Delhi from several thousand kilometres away, in Kerala, you can't help wondering if the scorching summer heat has caused a collective brain meltdown in the national capital.

I refer to the convolutions caused by Anna Hazare and Baba Ramdev, but let me make it clear at the outset that I have no intention of speaking about either of them. This is for the simple reason that they are private citizens, who have never sought and never received public office -- thus are not answerable to the great mass of citizenry. (No matter that they claim to represent them!)

But what do you make of the sheer fecklessness of the political class, those men and women that are supposed to be the pillars of our representative democracy? Here, let me say that I include not just the Congress but also the BJP and the CPI-M. Why are they all seemingly blinded by folly?

After his dramatic pillion-ride to Bhatta Parasol in Noida, Rahul Gandhi sarcastically enquired of the Mayawati government in Uttar Pradesh, "If you have nothing to hide why have you imposed Section 144?"

What does the Congress have to say after imposing Section 144 in New Delhi itself? Using his own logic, what is Rahul Gandhi's party hiding?

Wait, we have it from Digvijay Singh that the Congress party had nothing to do with the dramatic events that took place in the wee hours of June 5. So, what was the Manmohan Singh government thinking of when it decided to empty the Ramlila Maidan at one in the morning, using a lathi-wielding, tear-gas-shooting Delhi Police? (Who, I suspect, are going to be made the scapegoats when the Supreme Court takes up the case.)

Come to that, were the ministers thinking at all? Or were they simply veering from one direction to the next on pure instinct? When you look back at the past two months it is hard to believe that anyone was actually taking time out to think coolly for a minute or two.

To begin with, Anna Hazare's campaign for a 'better' Lokpal Bill was ignored by the Manmohan Singh ministry. The last straw for the activists seems to have been appointing Sharad Pawar to the Group of Ministers that was supposed to draft the bill. This contemptuous indifference continued even up to April 5 when Hazare sat down at Jantar Mantar on an indefinite fast to obtain a 'Jan' Lokpal Bill.

Indifference was followed by abjectness when, to everyone's astonishment, the middle class was galvanised by the old Gandhian.

Ministers -- Kapil Sibal at the fore -- fell over themselves to negotiate. The fast had begun on a Tuesday; on Saturday India learned that the bill would be jointly drafted by a Group of Ministers -- Pawar conspicuous by his absence! -- and 'Civil Society'.(What do we call ourselves if we support neither the Congress nor Team Anna? Uncivil Society? Military Society?)

At that moment of 'victory' nobody -- certainly not most of my brethren in the media -- seemed to care about the consequences. Consulting with a cross-section of opinion is fine, but asking a few individuals to actually draft legislation is a whole different kettle of fish. How, having surrendered to one set of individuals, would the Manmohan Singh ministry respond when another set of individuals made another set of demands?

We learned the answer to that when Baba Ramdev came calling. On June 1 no fewer than four ministers, including Pranab Mukherjee and the ubiquitous Sibal, waited to receive the Baba Ramdev at Delhi Airport. This was followed by a second meeting, held, rather oddly, at the Claridges Hotel, a brisk ten-minute walk away from 10, Janpath incidentally.

By the evening of June 4, the ministers clearly had Baba Ramdev hopping. They had that now-famous letter from him, admitting his satisfaction. They had the media demanding to know why Baba Ramdev was proceeding with his demonstration two days after giving over such a missive.

They had his admission that he was satisfied with 90 percent or more of the government's position. They had Team Anna looking askance at proceedings, and threatening to ask Baba Ramdev some pointed questions.

And then the Delhi police went into action.

Seriously, what were the ministers thinking when they authorised that raid on Ramlila Maidan? Couldn't they have at least waited another four hours, until sunrise, rather than toss women and children on the dark streets?

Sibal says he hopes that everyone learned a lesson from the episode. This is surprising language from a minister, the kind that I remember from the run-up to the Emergency. Come to think of it, one of the architects of that unhappy episode was another renowned Supreme Court lawyer, the late Siddhartha Shankar Ray.

But what was the lesson that Sibal wanted to teach? (He was, by the way, a lecturer for a brief period before his legal career took flight.) Was it a lecture entitled 'How To Rally Your Foes Against You'?

That is precisely what the June 4 raid achieved. Team Anna and 'Civil Society' announced a protest fast. The 'secularists' overlooked the presence of Sadhvi Rithambhara on Baba Ramdev's platform. The media forgot all the probing questions it had aimed at the yoga guru hours earlier. Everyone wanted to know how in fewer than a hundred hours the Union Government had gone from receiving Baba Ramdev at the airport to kicking him out of Delhi altogether.

And the opposition, not to be left behind, called it a second Jallianwala Bagh. As I said, folly is not the exclusive preserve of the Congress and its ministers.

If the BJP genuinely believes that a Lokpal Bill, stronger measures against black money, and so forth are necessary, why did it never take them up in any meaningful way over the past two years? Why has it now hitched its cart to the same unrepresentative representatives of 'Civil Society'? Why did it not point out, even two months ago, that legislation is the business of Parliament and not that of 'Civil Society'?

If the government abdicated its responsibility so did the principal party in the opposition.

So, come to that, did those leading lights of the Third Front, the Marxists. Come to think of it, I am not sure how far they can afford to attack the Congress on the issue of corruption. Most of the skeletons tumbling out today had their genesis in UPA-I, a government propped up by the Left. (Even the Commonwealth Games scam began in those years.)

There are several weeks to go before the scorching heat of a Delhi summer gives way to the monsoon winds. How many more masterpieces of folly shall be hatched in this summer of discontent? 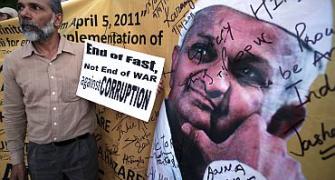 How will the Congress counter the BJP 'propaganda'