For the first time in the Republic's history, a Constitutional amendment was announced and passed by Parliament within 72 hours.
Senior journalist R Rajagopalan reveals how Modi executed this gambit. 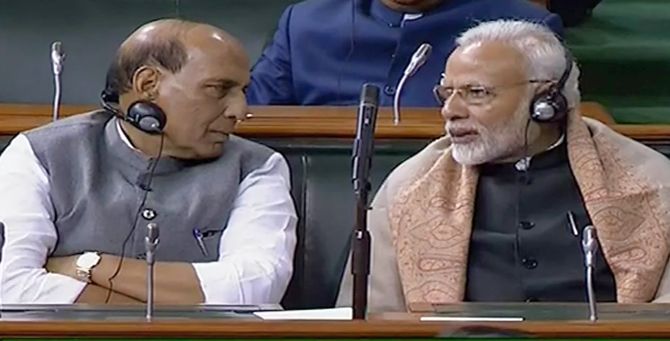 IMAGE: Prime Minister Narendra Damodardas Modi with Home Minister Rajnath Singh in the Lok Sabha, January 8, 2019, during the debate in the Lower House on the bill to provide 10 per cent reservation in jobs and educational institutions to economically backward sections in the general category. Photograph: PTI Photo

Prime Minister Narendra Damodardas Modi's decision to introduce 10 per cent reservations for the economically weaker sections in the open category, over and beyond the existing 50 per cent quota, bore his by-now familiar trademark: Utmost secrecy and laser-vision execution, both courtesy a handful of top, trusted officials.

When Modi opened up at the special Union Cabinet meeting on Monday forenoon, none of the ministers present were given the agenda papers.

Before the emergency Cabinet meeting was convened, a huge amount of nitty-gritty had already been worked out as Parliament was in session, and hence waivers had to be secured from the presiding officers of the both Houses to table the motion.

But with the prime minister behind the efforts, the PMO was able to navigate the challenges.

Thus it was for the first time in the Republic's history that a Constitutional amendment was announced and passed by Parliament within 72 hours.

Prior to Monday's Cabinet meeting, Modi held two rounds of discussions with top officials at the ministries of finance, law and justice. He also briefed Finance Minister Arun Jaitley about a possible 10 per cent quota.

Everyone else in the Cabinet Secretariat was taken aback as to why no agenda papers were being vetted before the meeting.

Was it about some new economic measures, or connected with defence issues in the light of the Rafale controversy went the speculation.

Except Jaitley and Bharatiya Janata Party President Amit Anilchandra Shah, none of the Union ministers were told about the contents of the Cabinet meeting or the subject matter.

When the Cabinet meeting was called to order, Modi broke the silence. He indicated that he was keen to pass the 10 per cent reservation bill in the current session of Parliament itself, and said he had worked out a strategy for the same. He also explained the salient features of the new quota measure.

All it took was half an hour, but it was 30 minutes that changed the prevailing narrative of Indian politics.

To call it a game-changer would not be far of the mark; that the Opposition had been caught on the back foot can be seen from the fact that despite all its misgivings, the Opposition toed the Modi line, and passed the bill in 72 hours of it being proposed.

No wonder Shah boasted to Union Power Minister Piyush Goyal in the Central Hall of Parliament on Tuesday, "Now, do you realise Modi's leadership? In 72 hours, he has changed the political narrative. Demonetisation, sudden decision to visit Lahore to meet Nawaz Sharif, surgical strike, all bore his signature. And he has repeated it in the beginning of 2019 with 10 percent reservations." 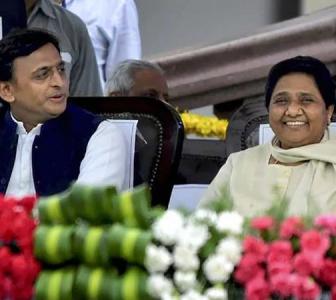 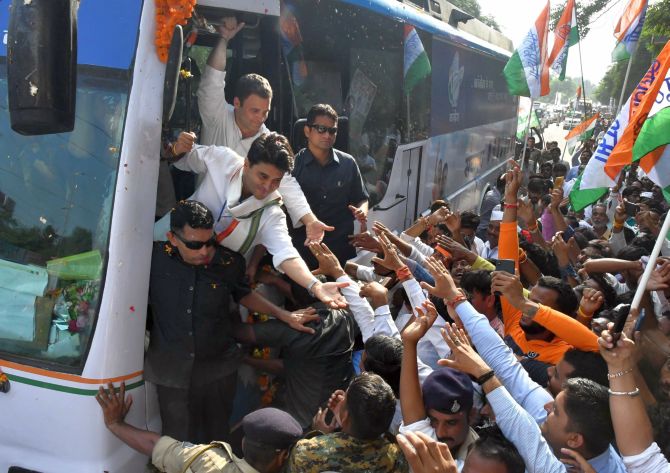 Congress looks at 'Jangipur model' in UP