'The change of vocabulary in the India-US conversation was significant and refreshing.'
'It matched the styles of Trump and Modi.'
'The differences were not papered over, but there was determination to resolve them in the days ahead,' says Ambassador T P Sreenivasan.

A new style of diplomacy was evident in Delhi during the meeting between External Affairs Minister S Jaishankar and US Secretary of State Mike Pompeo.

The usual rhetoric about partnership, based on shared values and mutuality of interests took considerably less time than usual and the discussions went straight on to a number of issues, which had begun to vitiate relations.

Knowing well that Pompeo had come with a mixed bag of demands and threats and no goodies, Jaishankar set the tone by stating that India had many relationships and it would do what was in its national interests, adding that partnership is the ability of each country to comprehend and appreciate the national interest of the other.

Clearly, the emphasis was on equality and mutuality.

Pompeo had created an irritant on the eve of his visit by releasing a State Department report to the United States Congress on international religious freedom in which there was severe criticism of the way minorities, particularly Muslims were treated in India. He stressed his personal evangelical interest in the matter.

India forcefully denied the allegations and stated that the US had no business to interfere in India's internal affairs. Though Pompeo spoke about religious intolerance in his speech in Delhi, the matter was not allowed to vitiate the atmosphere.

The usual caveats like the optimism that friends can resolve the most intractable of problems were voiced, but India identified some issues as non-negotiable in India’s national interests. The purchase of Russian S-400 missiles was one of these.

It was made clear that India would proceed with the acquisition of these missiles and expected that the purchase was eligible for waiver of CATSAA as these were weapons essential for India's security.

When Pompeo insisted that India should look for alternate sources because of the adversary nature of the Russian regime, Jaishankar gently reminded him of the days when India had to depend on the Soviet Union during the Cold War and that experience could not be 'wished away'.

Pompeo stood his ground, but left the decision to Modi and Trump.

India stood firm on the sanctions against Iran also. India had no quarrel with the effort of the international community to stop Iran from developing nuclear weapons. The Iranian nuclear deal had served the purpose to a great extent.

If the deal could be strengthened, it would be beneficial, but subjecting the people of Iran to great suffering and hurting the economies of several other countries would be counterproductive.

Iran and the US were only ten minutes away from a war. Iranian oil was crucial for India's energy security, apart from the fact that India had civilisational links with Iran.

India had reduced import of oil earlier, but this time India would expect the US not to insist on cutting our nose to spite our face.

The West Asian region had been in turmoil for long and India had a major interest in peace and stability in the whole area because of the huge Indian population there, engaged in turning the desert into modern cities.

Trade was the most contentious issue in Delhi as well as in Osaka, where Modi and Trump met on the margins of the G-20 meeting.

India had raised tariffs on 28 items imported from the US, including almond, apples, pulses and walnut, in retaliation to America's withdrawal of preferential access for Indian products.

The government on June last year decided to impose these duties in retaliation to the US decision of significantly hiking customs duties on certain steel and aluminium products.

The US, in March last year, had imposed a 25% tariff on steel and a 10% import duty on aluminium products. In Delhi, the only silver lining in the tough discussions on trade was the indication from Pompeo that India's position in the General System of Preference would be restored.

There was no respite in the 'minor trade war' between the two countries. This became evident when Trump himself tweeted about trade just before his meeting with Modi.

Trump termed the import duties 'unacceptable' after mentioning that he was looking forward to meet PM Modi. In his tweet, Trump said, 'I look forward to speaking with Prime Minister Modi about the fact that India, for years having put very high Tariffs against the United States, just recently increased the Tariffs even further. This is unacceptable and the Tariffs must be withdrawn!'

But the meeting between Modi and Trump went fairly well, Trump congratulating Modi and remarking that India-US relations were never better.

Though trade was high on Trump's agenda, the situation remained where it was in the Delhi talks. 'On some outstanding issues related to trade, I pushed for a constructive and pragmatic view. The real test of our intentions will be our ability to deal with this,' Jaishankar had said in Delhi.

After the meeting, Foreign Secretary Vijay Gokhale confirmed that the nitty gritty of trade was not discussed between the leaders.

The India-US meetings in Delhi and Osaka at the highest levels helped to identify the outstanding issues such as trade, Iran, Russian missiles, Afghanistan and 5G. Both sides were frank and forthright in setting forth their positions on these and other issues.

There was some concern that Trump's tweet would sour the summit, but both the leaders wisely avoided a contentious discussion. Modi did not even mention trade or the Russian missiles issue and focussed on the issues in which India and the US could cooperate such as global instability, 5G and defence.

The maturity in the relationship was evident at both meetings. But it was also clear that much work remained to be done. It still remains to be seen whether India would compromise on issues such as trade, Iran, Russian missiles or look for other alternatives.

The change of vocabulary in the India-US conversation was significant and refreshing. It matched the styles of Trump and Modi. The differences were not papered over, but there was determination to resolve them in the days ahead.

Ambassador T P Sreenivasan, (IFS 1967), is a former Ambassador of India and Governor for India at the IAEA.
He is currently Chairman, Academic Council and Director, NSS Academy of Civil Services and Director General, Kerala International Centre. 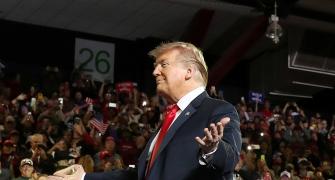 After Trump snub, US increases defence ties with India