The shift toward a staunchly secular identity will help Congress to rebuild its trust and confidence with the minority communities, especially Muslim voters.
Arguably, this is where the Congress' future also lies in national politics, observes M K Bhadrakumar. 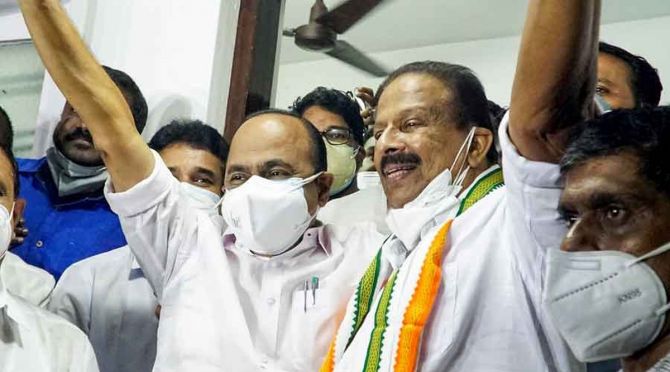 The long-awaited decision (external link) by the Congress high command in Delhi to appoint party veteran K Sudhakaran, a sitting member of the Lok Sabha, as the next president of the Kerala Pradesh Congress Committee as come on expected lines, but is all the same a hugely consequential development.

Sudhakaran, 73, is a charismatic figure in many ways -- a tall stalwart of the Congress party apart, he is rich with political experience and statecraft and is widely admired for his style of politics where sheer grit and will power to carry the fight to the enemy camp combines with his relentless assault on the enemy citadel until a breach becomes available.

Trust Sudhakaran to electrify Kerala politics like nobody's business in a long while after the departure of K Karunakaran, whom Shashi Tharoor once memorably described as Kerala's 'one and only Leader' (external link).

Three things about this development must be noted at the outset.

One, the Congress had an easy option to indulge in some sensational move by way of tokenism as all political parties under the trauma of an electoral defeat resort to, and claim it as a 'generational change' or whatever, but it instead chose to the the road not taken to make a rational far-sighted decision in the best spirit of 'democratic centralism'.

Make no mistake, this is authentic platinum-grade democratic centralism -- not an act of dissimulation to cloak whimsicality of top leadership.

It evolved out of much soul-searching within the party and took into account the broadest swathe of opinion within party ranks for a 'change' in the party's leadership, organisational makeup and its style functioning.

The legitimacy of Sudhakaran's appointment is not in doubt by a long shot.

Two, the manner in which this decision was formally conveyed to Sudhakaran by none other than Rahul Gandhi carries not only profound symbolism, but also underscored its significance as an integral component of the party's transition as it starts preparing for the 2024 general election.

A decisive state leadership that enjoys strong backing from the high command -- that is the unmistakable message here.

Kerala is viewed as a state with strong power base for Congress.

Three, the Congress has learnt the lesson from the tragedy that befell the Left in West Bengal in the recent decade.

In 2011, when the Left lost West Bengal to Mamata Bannerjee, it drew comfort that its vote share still remained substantial, auguring the scope for a political comeback sooner or later.

So, at least, the Left fancied while it made no radical attempt to reform itself or rebuild.

But that only led to the precipitous decline of the Left in West Bengal.

By the last election in 2021, the vote share of the Left dropped to less than 5 percent, a pale shadow of what it used to be ten years ago.

In Kerala, on the other hand, the Congress-led United Democratic Front lost in the number of seats in the recent election but held on to its vote share -- and even marginally increased it to almost 40 percent.

Arguably, it was possible for the Congress to rest the oars and leave the initiative to the ruling LDF to make mistakes and to capitalise on it.

But the Congress is rejecting that easy route and is opting for a wholesome restructuring of the party.

Yes, this is a genuine reset. The reports suggest (external link) that a revamp of the district level leadership of the party is also in the cards.

This may presage a drive to end the malaise of factionalism within the party and disband the scandalous practice of 'jumbo committees' carved out by the faction chiefs for their supporters.

Both the main parties -- CPI-M and Congress -- are pitching for a consolidation of their respective Hindu voter base.

The legislative wing and the party machinery of both parties are presently led by Hindus.

Presumably, this makes identity politics entirely possible within and betwixt the secular parties.

The BJP becomes the odd man out; its vote share has already dropped by some 2.6% to touch a little over 12 percent in the recent election.

Clearly, under the new leadership, any more innuendo by the Left that the Congress practises 'soft Hindutva' won't fly.

On the other hand, the shift toward a staunchly secular identity will help Congress to rebuild its trust and confidence with the minority communities, especially Muslim voters.

Arguably, this is where the Congress' future also lies in the national politics.

The party's halcyon days used to be when it assertively upheld its secular platform.

This is particularly important in Kerala politics where the average voter has shown the sophistication to discern the imperatives of national politics while voting in the general elections.

And there is no question that the Congress is regarded in Kerala as the most serious contender for power-sharing at the Centre in comparison with any other party in the fray.

The reset in the Congress will remain incomplete without a serious effort on the part of the Muslim League as well to reform itself.

The splintering of the Christian belts in the state has worked to the LDF's advantage.

Simply put, the LDF has shown a high degree of pragmatism to win elections.

Sudhakaran can be expected to be a perfect match for the LDF in this regard.

The LDF's challenge will only intensify since it is safely ensconced in power for the next 5-year period and will be in a position to resort to pork barrel politics without fearing the stigma of 'appeasement' of minority voters.

All in all, Kerala politics is returning to its a priori history before the BJP appeared on the scene.

This may remain so for quite a while, since the BJP appears to be mired in an existential crisis in Kerala politics from which it is hard to see how the party's central leadership can salvage it in a foreseeable future.

The party needs to go back to the abacus to hone its high-level cognitive skill. 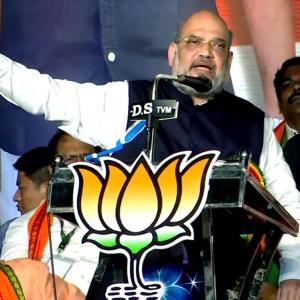