'Taranjit has the ideal temperament to deal with the Americans who understand firmness and appreciate flexibility.'
'He can hold his ground with a cheerful face and still make it clear that India and the US are partners, not rivals,' says Ambassador T P Sreenivasan. 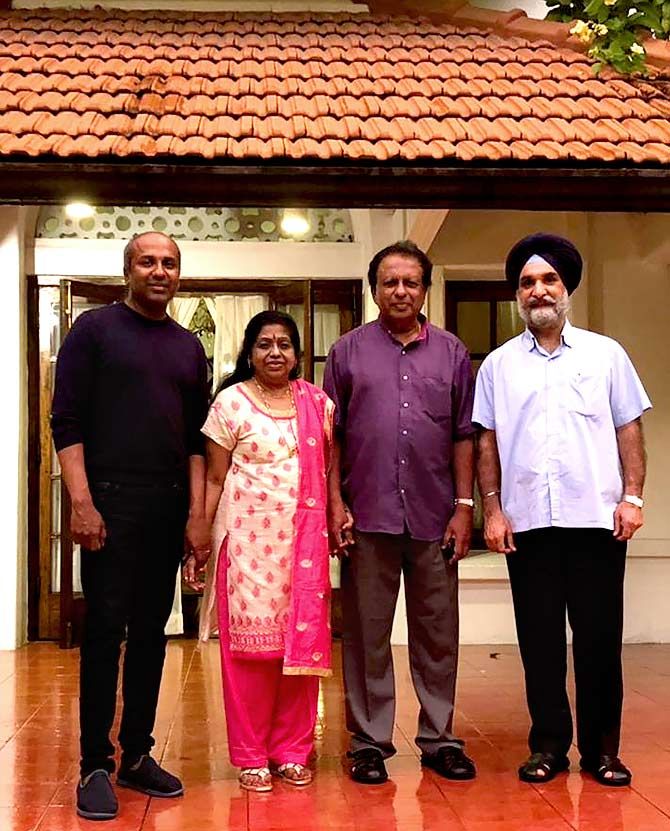 Nothing has made me happier recently than the news that our high commissioner in Colombo, Taranjit Sandhu, has been named our next ambassador in Washington.

If the reports are true, he will break several records in the Indian Foreign Service, including mine. He will be the first to be posted to the US four times as against my three times, and even more significantly, he already had two postings at crucial positions in our Washington edmbassy itself.

No other ambassador to the US has had the experience of being a foot soldier and a deputy before heading the mission on Massachusetts Avenue.

The only officers, who had served in Washington before becoming ambassador are Lalit Mansingh and Arun Singh, who were both deputy chiefs of mission.

Taranjit will bring to the post not only vast experience of the US, but also sterling achievements during his previous assignments. Happily, the days when only political ambassadors were sent to Washington are over and professional diplomats have been doing well there.

For me, Taranjit was my ablest soldier at the battle we waged in the embassy of India, Washington following the nuclear tests of May 1998. The situation had to be seen to be believed.

'We are going to come down on those guys like a ton of bricks,' said President Clinton 24 hours after the news had reached Washington.

The words used by Thomas J Pickering and Karl F 'Rick' Inderfurth were deception, lack of faith and betrayal. They took the position that there was no room for any dialogue and India had to be punished for its crime.

Long silent intervals interrupted our conversations. Sweeping sanctions were imposed on India in the first application of the Glenn Amendment. High handed action by overzealous bureaucrats made the sanctions harsher than ever intended.

The so-called 'people sanction' was largely undefined, but it looked possible that all contacts would be frozen and Indian migration would be suspended.

The embassy geared up for the exceptional situation under the direction of Ambassador Naresh Chandra, who rejected the advice of our paid lobbyist that we should lie low.

An action plan was drawn up to convince the state department, the house of representatives and the senate, the media and the Indian community of India's determination to be a responsible nuclear weapon State with a minimum deterrent.

Taranjit became the 'Congressman' in the process as he already had considerable contacts on the Hill during our annual struggle against the Burton Amendment, which sought symbolic reduction in aid to India on account of 'human rights violations' in Punjab.

According to a plan drawn up by Taranjot, Ambassador Chandra and I met virtually every US congressman and senator in a matter of a couple of months. He accompanied us to the meetings and held his own meetings with the staffers to prepare the ground. He was the most familiar Indian face on the Hill.

Most of the senators and congressmen, even the members of the India Caucus had turned hostile except for strong Indophiles like Frank Pallone and Benjamin Gilman.

The friendliest of them were more aggrieved than angry. They lectured us on the teachings of the Buddha, Mahatma Gandhi and Jawaharlal Nehru and advised us to take remedial measures.

They blamed the new government for changing the course of history, though the preparation for the tests had taken place even under previous governments.

Ambassador Chandra set the tone of our response, firm, analytical and non-repentant. The work done by the embassy in the first two months after the tests made a great difference to the perception of Indian nuclear policy in American minds. Even while President Clinton remained firm on India signing the CTBT as a condition for lifting the sanctions, a beginning was made by US Senator Sam Brownback, who under pressure from us and the Indian community, proposed that the sanctions should be relaxed so that trade relations could be saved.

Then external affairs minister Jaswant Singh did not raise the sanctions issue in his conversations with then US deputy secretary of state Strobe Talbott and left it to the embassy to deal with it.

Much of the credit for coordinating the work on the Hill, which changed the mind of the Clinton administration, went to Taranjit, whom we designated as the 'Congressman' in the embassy.

The relations that he developed with the congressional staff and some US congressmen will be an asset to him in his new responsibilities. Many of them are still active and some staffers have assumed state responsibilities.

After all the walking done on the Hill, Ambassador Chandra remarked we should be given a 'shoe allowance' and I added that Taranjit should get double the amount.

Taranjit has many qualities he has acquired in different parts of the globe, but what makes him an ideal ambassador in Washington is the skills he has acquired as a young diplomat on the Hill.

He has the ideal temperament to deal with the Americans who understand firmness and appreciate flexibility. He can hold his ground with a cheerful face and still make it clear that India and the US are partners, not rivals.

Needless to say, Taranjit has to hit the ground running as 2020 is going to be a tumultuous year in the US, with its implications for India. President Trump remains an enigma, wrapped up in mystery and he holds the key to developments in international relations during the year and maybe beyond.

After escorting Mahinda Rajapaksa to New Delhi on a delicate mission, Taranjit may have to prepare the ground for a possible visit of President Trump to India. Of course, there is many a slip between the cup and the lip when it comes to US presidential visits.

Then prime minister Inder Kumar Gujral sent me to Washington to prepare for a visit to India by Bill Clinton at the end of 1997, but the visit did not take place till March 2000. A presidential visit will make his travails on the Hill in 1998 look like child's play.

What he needs is only abundant luck as he is already fully equipped for the toughest of jobs.