'2020 will show whether India's troubled domestic economic and political house reveals a mismatch in their strategic association or whether closer strategic ties are yet possible,' says Anita Inder Singh. 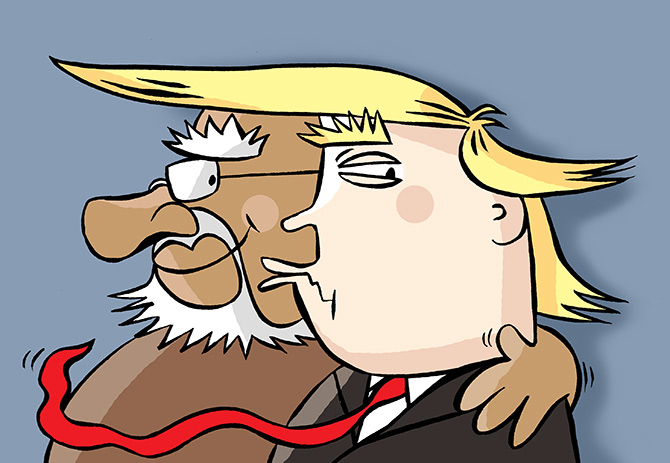 The upswing in the relationship that was highlighted by the signing of the civilian nuclear deal in 2008 started abating when Donald Trump became US president in 2017.

Economic progress was the outstanding reason why India went up in America's estimation after 1991.

Its high growth rates over a 15-year period persuaded Washington to believe that it could become a counterpoise to rising authoritarian China.

Additionally, India's stability as a multicultural democracy also impressed the US, especially after the collapse of the authoritarian Soviet Union in 1991.

By 2019, however, it was obvious to the world that India's economy had fallen into decline over the last six years.

Moreover, political and social polarisation, symbolised by increasing communal violence since 2014 and the large-scale protests over the Citizenship (Amendment) Act have raised questions about the quality of its democracy.

The economic downturn and New Delhi's ruling out a quick recovery brings into question India's ability to counter China in Mr Trump's 'Indo-Pacific'.

But to New Delhi's chagrin, the US still refuses to transfer sensitive military technology because India is not a formal ally.

While sovereignty decrees that India has a right to buy Russia's S-400 missiles, this air defence system blocks closer military ties with the US which sees Russia as a security threat.

If the absence of an alliance reflects India's determination to uphold its strategic autonomy, it simultaneously makes Washington doubtful about the viability of Indo-US ties.

Trade issues are another sticking point in their ties.

They take the sheen off India as a trading partner.

Fifteen per cent of India's imports come from the US, 16% of its exports go to the US.

As India's economy has taken a nosedive, China has shown off its economic progress by expanding its Belt and Road Initiative worldwide.

Several member-States of the European Union and all of India's neighbours have joined the BRI.

China's financial clout has established it as the largest investor in their economies.

It is also the largest arms seller to Myanmar and Bangladesh.

Its growing presence in the Indian Ocean poses tough queries about India's standing as the dominant South Asian power.

The other domestic development -- the passing of the CAA and the large-scale protests that it provoked -- have led many in the US to question India's secular democratic credentials.

Even before that, the state department in June reported that religious intolerance in India had grown under Prime Minister Narendra Damodardas Modi's government.

India predictably riposted that a foreign government had no right to comment on the country's internal affairs.

At December's 2 +2 dialogue in Washington, US Secretary of State Mike Pompeo said the US cared deeply about protecting minorities and religious rights everywhere.

He voiced confidence in the Indo-Pacific partnership, as being grounded in democratic values.

Official Washington speaks in more than once voice.

If Pompeo's statement appeared to dispel any idea that the Trump administration was putting pressure on New Delhi on domestic conflicts, the attitude of US lawmakers told a different story.

The situation in Kashmir since last August and the strong-arm tactics used to deal with popular protests against the CAA have led the US congress to question India's commitment to secularism -- implying equal rights for all communities and the maturity of its democracy.

Foreign Minister Subrahmanyam Jaishankar's recent refusal to meet the US congressional committee on foreign affairs to discuss Kashmir sparked the response that shutting out US lawmakers who were standing up for human rights was what they expected from authoritarian regimes -- not New Delhi.

Despite the strategic partnership, the India-US relationship will sail in choppy waters in 2020.

But the economic gap between India and China raises questions about India's value as a contributor to Mr Trump';s game plan for the Indo-Pacific.

China's gross domestic product per capita is more than four times that of India.

And as China aims to build a world class military by 2050, India is finding it hard to upgrade its armed forces.

The fact of India's economic and military dependence on the US rankles with New Delhi and annoys Washington.

The Trump administration likes prosperous allies because they are better able to face common threats.

Instead, its insistence on going ahead with the CAA shows that it ignores warnings that any move away from secular democracy could spark destabilising conflicts.

India's strategic position in the Indian Ocean rules out its being ignored by the US.

2020 will show whether India's troubled domestic economic and political house reveals a mismatch in their strategic association or whether closer strategic ties are yet possible.

Anita Inder Singh is a founding professor at the Centre for Peace and Conflict Resolution in New Delhi.