News
Business
Movies
Sports
Cricket
Get Ahead
Money Tips
Shopping
Sign in  |  Create a Rediffmail account
Rediff.com  » News » Let us not stop the police from doing its job

'To ascribe motives to the actions of the state government at such an early stage of police investigation will be counter-productive,' says former Union home secretary Madhav Godbole. 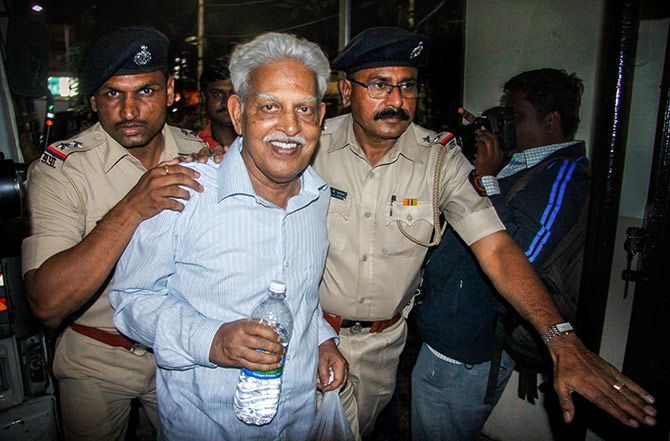 IMAGE: Revolutionary writer P Varavara Rao -- one of the five activists arrested on August 28 -- hit out at the Centre and the Maharashtra government, saying there cannot be a bigger conspiracy than calling those fighting against 'fascist policies' conspirators. Photograph: PTI Photo

The stalled attempt of the Pune police to arrest some liberal activists has blazed a new trail and has raised disquieting questions which are far more important than merely the concerns arising out of the Bhima Koregaon violence.

Perhaps, it is for the first time that three courts in Delhi at three levels -- a magistrate's court, the Delhi high court and the Supreme Court -- have taken cognisance of the matter the moment the activists were arrested.

The police had approached the magistrate's court for a transit remand to bring two of the arrested persons to Pune. The Delhi high court and the Supreme Court have thought it fit to intervene and the Supreme Court has ordered that the persons arrested, not just in Delhi but also other places in the country, should be kept under house arrest till the case is disposed of by it.

The apex court has declared 'Dissent is the safety valve of democracy -- if it is not allowed, the pressure cooker will burst.'

The observation made by the court is unexceptional, but has created the impression that there was a deliberate attempt on the part of the police to stop dissenting voices in the country.

I find this somewhat disconcerting. It is time we go back to the basics.

It is true that the credibility and the image of police, both at the central and state levels, has suffered grievously in recent years, but this cannot be the reason for not permitting the police to act in this case.

If the rule of law is to prevail in the country, the police must be allowed to do its job.

After investigation, including interrogation of the persons concerned, the case will be put up in the court and the courts will have the last word to decide if there is any substance in the case.

Should the police be deterred from doing their work by seeking the intervention of the courts?

Should anyone, including the court, pre-judge the issues and the case?

There seem to be increasing instances of the courts stopping the police from interrogating the accused by taking them in police custody. The judgment as to whether custody is necessary for effective interrogation should be left to the police.

If there is misuse of powers, the police can be hauled up by the court but it would be frustrating the provisions of law if the police is not permitted to do their job.

I have been advocating for quite some time to do away with the provision of law for anticipatory bail (The Changing Times, 2000, pages 113-116).

The original purpose of incorporating Section 438 in the Criminal Procedure Code is being subverted by liberal recourse to this provision, particularly in high profile cases though interrogation of the accused in custody is often more successful during police investigation.

As the Punjab and Haryana high court had held the investigation should not be stifled at the very threshold of investigation by granting anticipatory bail (Gurbaksh v state of Punjab, A. 1978 P&H (F.B.)).

The Supreme Court has also cautioned against its misuse. However, the experience is quite the contrary.

This was pithily brought out by a cartoon. A father proudly shows a statue of Mahatma Gandhi to his son and says, 'Gandhi had to undergo long spells in the prison in the freedom struggle.' The son innocently but pertinently asks, 'Daddy, why did he not take anticipatory bail?' 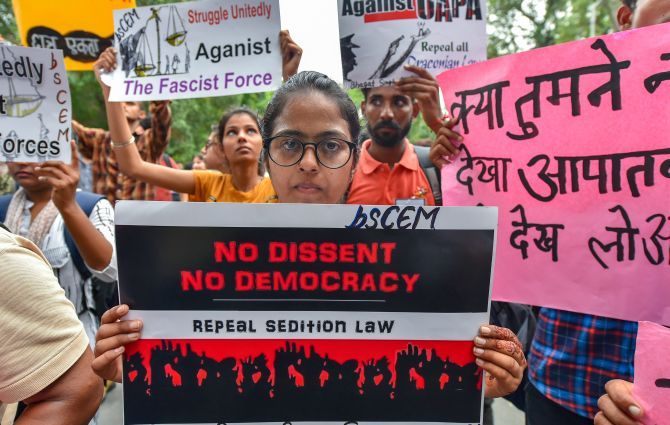 IMAGE: A protest against the police raids on the homes of activists and their subsequent arrests in New Delhi. Photograph: Kamal Kishore/PTI Photo

I have often argued in my writings that Naxalism should not be treated as a simple law and order problem and the underlying socio-economic causes must be addressed. But a line must be drawn between the advocacy for this well merited cause and supporting the ideology of violence to achieve the objectives.

Any encouragement for mobilisation of funds for the purpose, procurement and use of lethal weapons must be put down with a heavy hand. Often, there is a thin line between the proponents of the cause.

The police must be permitted to establish their case if any group of activists falls in the latter category. Prima facie, this is the issue in the present case.

As in the United States after the assumption of office by President Trump, in India too, the country is split in the middle, with Hindutvawadis, and liberals and secularists arraigned against each other.

It is as if 'either you are with me or against me'. Everything is either black or white. There are no shades in between.

As a society, are we becoming colour-blind?

Analogies are being drawn with the Emergency during 1975-1977. This is ridiculous. In no way are the two situations even close to each other.

The very fact that the judiciary intervened so decisively in this case at the level of both the high court and the Supreme Court so soon after the event and on one single day is proof enough that this comparison is not valid.

In fact, making such comparisons has been responsible for creating a very negative and destructive mindset in society.

In the national discourse on this case, one important aspect is being lost sight of. According to the Constitution of India, 'police' and 'public order' are subjects in the state list. The Union government is not even remotely concerned, except that in this case,the state and central government belong to the same political party. But this is inevitable in a quasi-federal structure of India.

To ascribe motives to the actions of the state government, and that too at the so very early stage of police investigation will be counter-productive.

Let the law take its course. Let us not stop the police from doing its job.

India has the world's most powerful judiciary to uphold the Constitutional precepts and protect the citizens' freedoms.