'Padmavati represents the voice of thousands of Rajput women who lived and died not by their own choice.'
'Let their story be heard,' says Kishore Singh. 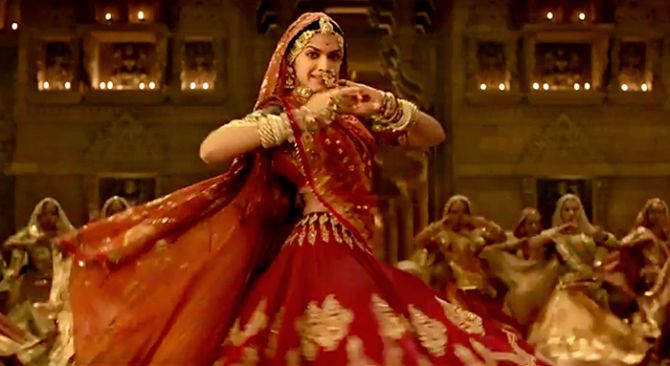 The Rajput is quick to anger (but also easy to placate).

Growing up in a family descended of warriors, the casual interface of Rajputana history with associations of family honour and chivalry was commonplace at clan gatherings.

Popular cinema at the time was critical of, and lampooned, the royals -- the actor Pran essayed many such roles -- but neither the popular press, nor the Rajputs themselves, gave it undue consideration.

So, this controversy around Padmavati is the more astounding, yet, hardly surprising.

When the Deorala Sati occurred near Jaipur, the Rajputs let it be known that the rest of the country was unfamiliar with its customs. And have we forgotten that Jodhaa Akbar drew similar flak before it was released as a commercial success?

My wife, though hardly parochial, has friends amidst the Rajput community and attends 'get-togethers' from which I am allowed to absent myself for being critical of any form of exclusion.

She is on their WhatsApp groups that are currently buzzing with the 'insult' meted out because actress Deepika Padukone has performed the ghoomar in a way royal womenfolk did not. 'Really?'

Just as they are all angry, the womenfolk can't wait eagerly enough for the film to release to replicate its costumes and jewellery before the next family wedding where most of them will channel their own, inner Padmavatis.

Whether Padmini did or did not exist, whether Khilji glimpsed her or not, the history of Mewar is replete with enough other tales of courage: Panna Dai's sacrifice of her infant son to save the future king of Chittor; Mirabai's abdication from the luxuries of the palace to write outstanding poetry and bhajans; the audacious stand of the Rana's armies that fought to the last soldier, making the matter of victory or defeat irrelevant.

Padmini's is another story from that pantheon that tells of jauhar, a rite of valour as a ritual against rape and enslavement.

Judging history through the lens of contemporary society makes it irrelevant, but to imagine that everyone participated in such rites voluntarily is contradictory to human behaviour.

Which is why interpretations and discussions must not be curbed by either State or political outfits so true valour gets the credit it deserves.

While Rajput society might be provoked against historical investigation, why is a Bollywood movie taken to be history, and why presume the worst of a film, or film-maker, known to celebrate pop heroism?

Is Rajput history so vulnerable that it cannot stand up to its fairy-tale gaze?

In a country where the Ramayana is considered sacrosanct, scholars have weighed in on Sita's perceived weaknesses and strengths according to their interpretations for which they have offered up academic evidence.

And while there have been controversies and bans -- think Wendy Doniger -- investigation into the female characters, whether from mythology or history, is only to be welcomed.

To take umbrage at what is written from different perspectives, or depicted on the screen, is infantile.

Indians -- Rajputs included -- turn to the silver screen for entertainment, and Padmavati appears to have all the makings of a potboiler.

Is it history? Perish the thought, that was never the film-maker's intention.

Precious little has been recorded of women's lives in the medieval ages, leave alone their names.

If a film resurrects a few of those and adds them to our lexicon in the 21st century, it would have done onerous service.

Padmavati represents the voice of thousands of Rajput women who lived and died not by their own choice.

Let their story be heard. 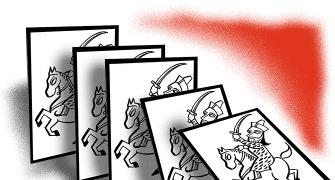