'...Else we will let the situation develop to a dangerous level where much greater violence will be the only outcome,' says Colonel Anil A Athale (retd). 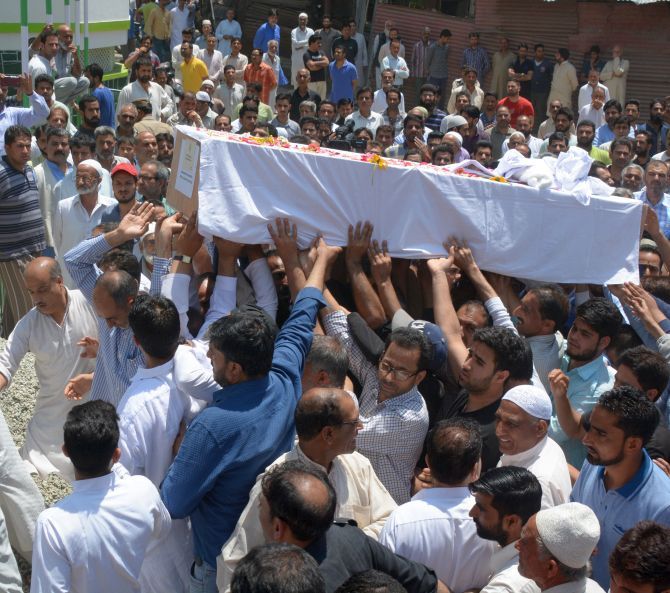 On June 22, 2017 -- a holy day of Ramazan for all Muslims -- Mohammad Ayoub Pandith, a deputy superintendent of police in charge of the Jama Masjid area in Srinagar, was attacked by a mob, stripped and stoned to death.

This killing comes on the heels of Indian Army Lieutenant Ummer Fayyaz's murder in cold blood on May 10.

The manner in which both murders were committed shows that the separatists have begun to target loyal individuals while the separatist leaders continue to live a life of luxury and are protected by the very police they target.

As expected, the otherwise vociferous human rightswallahs are deafeningly silent.

It will be a mistake to ignore these direct challenges to the authority of the Indian State.

Three decades ago, a similar incident took place in Punjab.

On May 15, 1983, Deputy Inspector General of Police Avtar Singh Atwal was gunned down by tterrorists on the steps of the Golden Temple.

The murder of a respected police officer was widely condemned by all except the extremists.

In retrospect, many historians feel that this was the right time to act against the extremists sheltered in the Golden Temple. But nothing was done and the situation was allowed to drift for over a year.

In a year's time, by June 1984, the Sikh extremists were on the verge of declaring independence, forcing the government of the day to finally act.

The result was Operation Blue Star that resulted in the deaths of hundreds of innocents and storming of the Sikh holy shrine. The scars of that event have not healed even after three decades.

The proverb a stich in time is worth nine was never truer in the case of the Punjab problem as it is in the current situation in Kashmir.

The Constitution guarantees freedom of religion. But what is happening in the mosques in Kashmir is that under the garb of religious sermons, separatists are using mosques -- especially the Friday sermons -- as a propaganda tool.

Is it any wonder then that virtually every Friday after the 'sermon', mobs come out and indulge in stone throwing and other violent acts?

DySP Ayoub Pandith's murder can likely be attributed to the provocations at the mosque. Is this not incitement to murder?

It is time the government took firm action against the misuse of religious places.

The time to act is now, else we will let the situation develop to a dangerous level where much greater violence will be the only outcome. Punjab offers a useful lesson in this respect.

Control of the Friday sermon is not new.

Many Muslim countries strictly monitor the mosques and come down heavily on any political use of the religious platform.

Having said that, it is also incumbent on the government to be totally impartial in this respect.

Hate speeches by sadhus and mahants should attract the same provisions of the Indian Penal Code.

The State must not only be impartial in this respect, but also be seen to be so.

The slogan of 'Azaadi' evokes a great deal of sympathy in many liberal hearts in India. But what sort of 'Azad' Kashmir will it be?

The separatists also call for imposition of strict Sharia rule in Kashmir.

They are against education for women. This has been seen in the spate of burning of girls' schools in Kashmir.

There are separatists who admire ISIS and want a similar murderous regime in Kashmir.

Do the liberals who side with the Kashmir separatists want that kind of future for Kashmir?

Do the Kashmiris themselves realise what future they will have?

Many Kashmiris want their state to be part of Pakistan. Pakistan is a State that has ethnically cleansed their country of non-Muslims.

From 13% of the population in 1947, Hindus and Sikhs today number less than 1 percent.

If Jammu and Kashmir is to be merged with Pakistan, what will be the fate of the Hindus of Jammu and the Buddhists of Ladakh? Do the liberals have any answer to this question?

Let us also not forget that close to 20% of Kashmir's population is Shia.

With the massacres of Shias in Pakistan a norm -- on June 23, more than 30 Shias were killed in a targeted bomb blast at Parchinar -- will they be safe in Pakistan?

It is time these questions are asked.