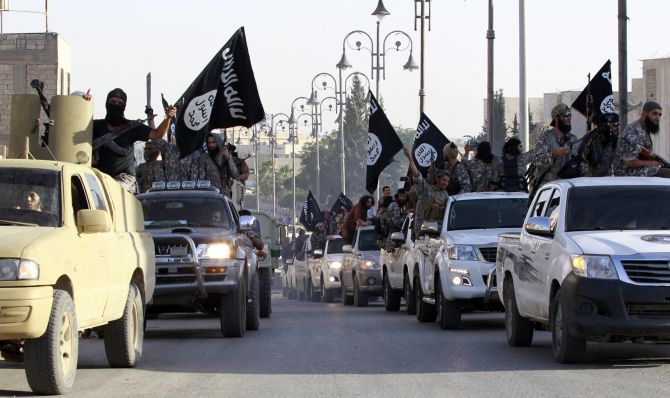 Any attempt to defang Islamic State must first cut off its main sources of funding, says Sandhya Jain.

In a bid to legitimise its existence as a new State carved out of vast swathes of territories of Iraq and Syria, Islamic State has reportedly opened its own bank and is said to be hiring bankers.

This stunning development, reported by the Al Jazeera television channel and financial blog Zero Hedge, is said to be motivated by a desire to acquire the prerequisites of Statehood and issue its own gold-backed currency.

The bank has reputedly been set up in the Iraqi city of Mosul. Islamic State has also presented a budget for the territory it controls. While both claims have yet to be confirmed by independent sources, an unnamed religious leader in Mosul told the Middle-East current affairs site Al-Araby Al Jadeed that the stories were true.

The budget is said to be around $2 billion (about Rs 12,400 crore/Rs 124 billion) with a $250 million (about Rs 1,550 crore/Rs 15.5 billion) surplus, and covers expenditure for the salaries for its fighters and the civil services it claims to provide, namely, facilities like construction, waste management and education.

Since it is undeniable that unlike other terror groups, the IS has revenues from captured oilfields and the cities it controls, it is likely that it did announce a budget.

The aim, says Al Jazeera, is to overcome its reputation of being a terrorist organisation and try to become a legitimate new nation State, in the manner in which some countries once accepted (recognised) Taliban rule in Afghanistan.

Qatar University Professor Mahjoob Zweiri, who teaches Middle-Eastern history, points out that the Taliban regime in Afghanistan had also issued budgets, which partially helped to legitimise it, though it must be borne in mind that Afghanistan was a recognised State with defined borders.

More pertinently, the Taliban regime was recognised only by its principal backers, Pakistan and Saudi Arabia. It was allowed to set up consulates in both countries, but in the long run neither country could help the Taliban government gain international legitimacy and acceptability.

Islamic State, however, does not have accepted borders and has stretched its reign across parts of Iraq and Syria. Nevertheless, as Professor Zweiri points out, the strategy to act like a nation State has been put in place.

Islamic State is trying to convey to the outside world that it is in a position to provide jobs and take care of people within the territories it controls, including those who wish to cross over. But it is questionable if the IS has the ability to deliver on its promises.

So far, basic facilities like electricity, fuel, medicine, and water are poor; only fear has inhibited protests from residents who suddenly found themselves with new masters around June 2014.

Local resentment with the self-proclaimed 'Caliphate' simmers below the surface as garbage piles up in back alleys and streets -- despite claims of waste management -- and there is no real economy to provide jobs and a decent living.

At the same time, residents are exposed to public stoning, brutal beheadings, and daily air strikes by the US-led coalition.

In fact, as independent researcher Sajad Jiyad points out, even to continue funding the existing areas under its control (however inadequately), Islamic State depends on its ability to seize fresh territory and resources. As this is not easy, it de facto relies upon local mercenaries who seize areas under the banner of Islamic State and join it as affiliates. This kind of pyramid scheme has its own limitations and has already begun to falter.

Now if Islamic State has truly established a bank, it will need banking experts. According to some sources, Islamic State fighters come from backgrounds that could provide that kind of knowledge; other sources say it is looking to hire experts.

So far those who travel in the 'Caliphate' need three different currencies to buy their needs; have to rely on aid groups for medicines; and have to rely on the governments of Iraq and Syria for their salaries.

A finance executive said that even within territory controlled by them, Islamic State functions unevenly. In Iraq, it functions more like a mafia or terror group, though a soldier from the group, based in the oil town of Beiji, told a journalist some months ago that Islamic State had recruited former Iraqi civil servants to manage Beiji and Mosul.

In the Syrian cities of Raqqa and Deir Ezzor, Islamic State is said to resemble something like a State. Overall, it neither has personnel nor manpower to take on the accoutrements of a State.

Yet, Islamic State is determined to act like a State and has even introduced price controls on everything the populace needs, from bread to caesarean operations. But these are ignored with impunity because prices are impossible to maintain in the face of the skyrocketing costs of fuel and transportation and also have no relationship with the real costs of electricity, medicines and so on.

The US-based Rand Corporation has stated that Islamic State had accumulated huge wealth and is one of the richest terrorist groups in the world. It can be defeated only by curbing its funding, for which the United States must sanction the entities or intermediaries that do business with it, while supporting forces that can roll back Islamic State's territorial gains.

Islamic State harvests most of its money through smuggling oil and products originating in the Iraqi and Syrian oil sectors, and by extorting entities in those sectors; through extortion and taxation of the local economy in areas it controls; through looting the region's rare and valuable antiquities and selling these in the blackmarket.

Under Abu Bakr al-Baghdadi, senior US government officials believe that Islamic State also relies on external donors as some of its internal sources have been squeezed dry.

This huge wealth enabled Islamic State to seize large swathes of territory in Syria and Iraq and fight the forces of both governments as well as other non-State armed groups. Its current surplus is believed to be around $2 billion, which matches the budget it is believed to have presented recently.

This raises questions regarding the use of these resources. Islamic State could attempt to capture new territories in Iraq and the Levant (which includes parts of Syria, Lebanon, Jordan, Israel, the West Bank, and Gaza). Or it could seek influence in strategic parts of the Muslim world, including Pakistan and Afghanistan, as part of its quest to upstage Al Qaeda in the jihadist world.

Both objectives are likely as Islamic State is keen to establish an Islamic Caliphate that begins from Iraq and the Levant and ultimately spreads throughout the region. Hence, it will invest revenues on 'State building,' or rather, implement its Salafi-jihadist governance structures in the territory it controls.

Media reports suggest that Islamic State operatives have travelled to Pakistan, Afghanistan, and other countries to recruit jihadis. They have secured the allegiance of several commanders of the Pakistani Taliban, leaders of the Abu Sayyaf group in the southern Philippines, the splinter group led by the former leader of Jemaah Islamiyah in Indonesia, and Ansar Beit al-Maqdis in Egypt's Sinai Peninsula.

The American strategy, as expressed by Treasury Under Secretary David S Cohen in October before the Carnegie Endowment for International Peace, involves cutting off Islamic State's access to revenue, restricting its access to the international financial system, and targeted sanctions against the leadership and facilitators.

Any attempt to defang Islamic State must first cut off its main sources of funding, especially its revenue from oil sales, extortion and crime, ransom payments, and support from foreign donors. Oil and criminal extortion seem to be its largest sources of funding.

As the US has noted, oil economy inevitably enters the formal economy at some stage, and the person(s) selling oil will surely have bank accounts; trucks to convey the oil, and other facilities that may be licensed, and all these make the oil facilitators vulnerable.

Thus, once the middlemen are identified and their banks are identified, their assets can be frozen or their banking transactions made difficult. Simultaneously, cross-border oil smuggling routes have to be closed down, most notably in Turkey and Kurdistan.

But rolling back Islamic State will ultimately need efficient forces on the ground. This alone will completely choke its finances and end its reign. Till then, the group will also have access of informal banking systems, such as hawala institutions that operate the Middle East, South Asia, and parts of Africa.

So far, the West is unwilling to commit ground forces and only Iran, which is feared and detested by Sunni nations led by Saudi Arabia, is the only country that has done so. 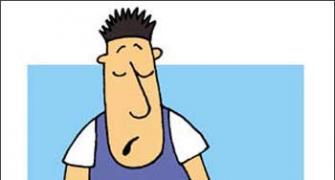 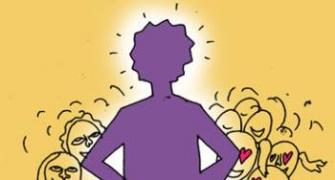 'I have a crush on my principal. What to do?' 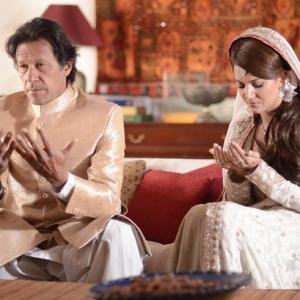 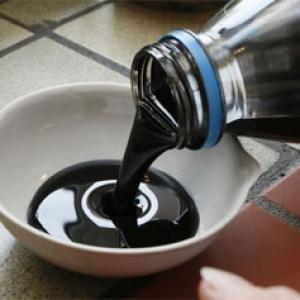