News
Business
Movies
Sports
Cricket
Get Ahead
Money Tips
Shopping
Sign in  |  Create a Rediffmail account
Rediff.com  » News » Is freedom of speech a principle worth defending?

Is freedom of speech a principle worth defending?

The drama about cartoonist Aseem Trivedi, tossed in the clink by the Maharashtra police on charges of sedition, has been jostling for space with the drama about a Libyan mob attacking the United States consulate in Benghazi to protest a film whose best feature is tastelessness, made by some shadowy guy whom nobody seems to know and everyone seems to dislike.

Both the UPA and the NDA have distanced themselves from the Trivedi kerfuffle, but then Mr Trivedi is a no-contest case. No political party has yet done anything to address the processes that allow people to harass each other with frivolous lawsuits that make life a living hell. At the moment you can actually force someone to emigrate (RIP, M F Husain), by filing specious cases citing hurt sentiments, which the courts inexplicably continue to entertain, as if they don't have enough genuine cases backed up for miles.

Insecure governments thrive on events like these that highlight the nasty real-life consequences of free speech, from incarceration to murder. They cite the limits of free speech when it's an inconvenience, viz cartoons that mock venality and corruption, but love to push those limits themselves, for example to mobilise vote banks when Salman Rushdie is due to hit town during election time.

It then becomes easy to draw a straight line from freedom of expression to law and order problems, without stopping to ask why random charges of sedition by a private individual against another are even applicable, or why politicians feel free to organise and whip up blind religious fervour where there wasn't really any, or why there isn't better law and order to back up our constitutional rights.

And at the end of that line is, always, the glorification of the wrong sort of no-offence. We're told to practise "No offence meant", but are forgetting how to say "None taken". When cartoons are banned from school textbooks, we are being encouraged to become increasingly emotionally illiterate and childlike, unable to detect nuance, and free to throw tantrums and break things when we're upset. We're forgetting how to read text and pictures in a sophisticated manner, forgetting about irony and satire, and becoming dull-witted literalists who read a cartoon depicting the betrayal and corruption of national symbols as anti-patriotic. As the world grows infinitely more complex, we're becoming ever more simple-minded.

In a democracy that stands by free speech, the best response to a bad book is a better book. So you have to wonder about the aims of a state that hasn't, for two thirds of a century, made education  not just literacy  the cornerstone of their policy.  A population that cannot read or write a better book, but is always up for a good riot, is a population at the mercy of a political class that delights in yanking its chain.

The core debate that we have not properly had is: do we think that freedom of speech is a principle worth defending, with blood if need be? If so, the lines must be drawn, as the Supreme Court says, by "reasonable, strong-minded, firm and courageous men, and not those of weak and vacillating minds, nor of those who scent danger in every hostile point of view". That means, draw the lines in defence of risking offence, not in defence of being offended. The courts need to tell us more often, to get over it. We need steely law enforcement to make sure we do get over it. And we need to have non-violent tools with which to express our offendedness. Freedom of expression cannot be constrained when it comes to books and encouraged when it comes to violence.

A cartoon by The Onion is currently doing the rounds on Facebook. Below the drawing of a set of familiar deities pleasuring each other, the "news" caption says that the image "reportedly went online at 6.45 pm EDT, after which not a single bomb threat was made against the organisation responsible, nor did the person who created the cartoon go home fearing for his life in any way. Though some members of the Jewish, Christian, Hindu, and Buddhist faiths were reportedly offended by the image, sources confirmed that upon seeing it, they simply shook their heads, rolled their eyes, and continued on with their day".

A crude attempt to give offence, emasculated by the refusal to take offence -- now there's something to aspire to. The fact that such a caption is funny, is terrifying. 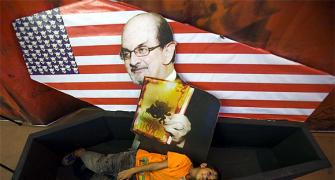 'Thanks a lot': Rushdie on India's ban on Satanic Verses
Sedition law should be scrapped, says Katju 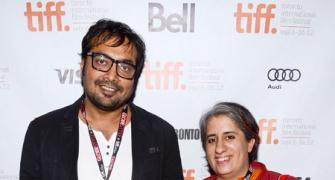