Though the 2019 alliance talks, if any, are a long way off, CM Jaya’s current state of health and her long hospitalisation maybe a facilitating factor for the AIADMK to consider any BJP initiative favourably at the time, says N Sathiya Moorthy. 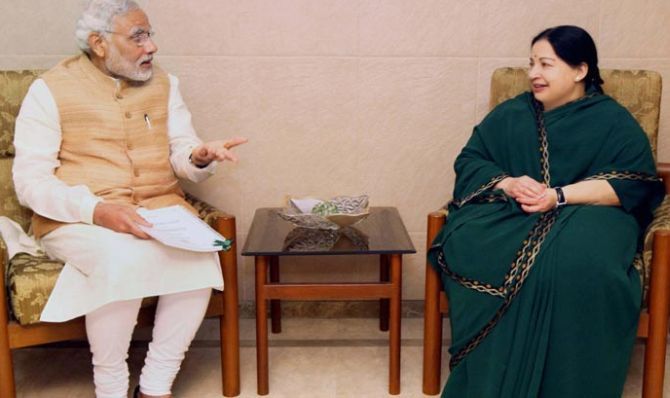 In a move indicating future possibilities, the ruling Bharatiya Janata Party at the Centre has extended support to the All India Anna Dravida Munnetra Kazhagam in the upcoming assembly by-election in Puducherry, where Congress Chief Minister V Narayanaswamy is seeking to enter the assembly.

The two parties are contesting three assembly by-elections in neighbouring Tamil Nadu against each other, and against DMK and PMK.

In the assembly polls of May this year, the Congress had won 15 of 30 seats, and the party’s DMK ally, 2, for the combine to form the government.

The then ruling AINRC of outgoing chief minister N Rangaswamy, a Congress rebel from the past, won eight seats.

The AIADMK, contesting alone after its two post-poll allies from the previous 2011 elections had fallen out, bagged four seats.

The BJP contested all 30 seats and drew a blank.

Continuing with their pre-poll alliance, the Congress and the DMK formed a coalition government.

However, given the faction feud in the Congress, it took the party high command a relatively long time to identify one-time Union minister (MoS), Narayanaswamy, for chief minister.

Interestingly, the AINRC has since extended unilateral support to AIADMK candidate Om Sakthi Sekar for the Nellithope seat.

It’s not without reason. Party leader Rangaswamy hopes to return as chief minister if the defeat of Narayanaswamy could trigger cross-overs from the Congress.

He could then hope to count on the AIADMK backing, which would have then added up five MLAs.

Getting Rangaswamy in, or even Narayanaswamy out, should be a small gain for the BJP in the overall contest. Its larger interests lay in neighbouring Tamil Nadu, where the party-led NDA fared badly in 2014 when the ‘Modi wave’ gripped much of India.

This was followed by the BJP’s poor showing in the May 2016 assembly elections in Tamil Nadu. Worse still, the BJP lost three of its 2014 allies, namely, the DMDK, MDMK and the VCK to the Left-centric People’s Welfare Alliance. The PMK, the other ally from 2014, went on its own in 2016, and drew a blank.

Worse still in the BJP’s national calculus for the 2019 parliamentary polls -- or, as perceived today -- all these parties polled much lower figure than the self-claimed break-up of the 2014 NDA tally of 17.5 per cent vote-share in Tamil Nadu, with only two seats to their credit.

All of it proved that the BJP/Modi vote-share in 2014 might have been higher than the party was ready to claim credit for, or what other allies of the time were ready to give them credit for.

Yet, in a 2019 poll sweepstakes, vote-share does not matter for the national leadership of the BJP, seat-share alone would.

The BJP in Tamil Nadu, without either the ruling AIADMK or the rival DMK, does not stand a chance to make up the numbers, either on its own or through alliance partners, should the emerging situation demand it.

The ‘Hindutva image’ the Modi leadership seems to have replace since after his development platform for the 2014 polls, will keep the DMK away.

Anyway, after losing all 40 seats in Tamil Nadu and Puducherry put together, in the company of the Congress rival of the BJP, the DMK cannot be a naturally sought-after ally for the Modi leadership.

Against this, the AIADMK under CM Jayalalithaa swept the parliamentary polls in the state, though on her ‘Lady vs Modi’ campaign.

Jaya also became the first chief minister and the AIADMK the first party in 25 years to return to power in the state for a second consecutive term -- in the 2016 assembly polls.

Last but not the least, the BJP has transferrable votes for the AIADMK, and the reverse is also true in constituencies where they contest as alliance partners.

Experience has shown that the BJP especially does not have ‘transferrable votes’ when the DMK is a poll ally. Consequently, the DMK too has not been able to ‘transfer’ votes to the BJP in other constituencies.

From the AIADMK side, there is also nothing any more as a ‘minority vote-bank’ for the party especially to be afraid of losing in BJP-Modi’s company -- unless otherwise it gets revived all over again in 2019, if at all.

Though 2019 alliance talks, if any, are a long way off, CM Jaya’s current state of health and her long hospitalisation maybe a facilitating factor for the AIADMK, especially to consider any BJP initiative favourably at the time.

Depending on Jaya’s disposition at the time, and the consequent health of the state administration, the AIADMK could do with additional campaign-support from the Modi imagery.

The way the Modi government at the Centre handled the Jaya health issue with the political and constitutional sensitivities it deserved has endeared the prime minister to the AIADMK cadres.

Even without any of these, the rival DMK’s patriarch Muthuvel Karunanidhi is not tired of constantly hinting at -- or, harping on -- the Centre’s kid glove handling of constitutional issues when Jaya was hospitalised.

He had earlier begun with claiming that PM Modi’s early congratulations to Jaya only hours in to the vote-count for the May polls was among the reasons for the AIADMK’s recorded tally.

It’s another matter that in recent weeks, after the governor facilitated the smooth administrative transition without power transfer during Jaya’s hospitalisation, the AIADMK state government has been reacting favourably on issues where it has had differences over the past years.

Included in the list is the state government’s adoption of the new education policy, foodgrains policy, and UDAY power scheme. The Jaya government had opposed these in the past.

It does not mean that the Panneerselvam-chaired Cabinet had accepted them all without anticipated concurrence from ‘Amma’, when she is ready to take on the responsibilities all over again.

Yet, it means that bilateral climes might have cooled down at one end, and warmed on the other -- for the Centre and the state on the one hand, and possibly the BJP and AIADMK on the other.

In the interim, however, it is unlikely that the two parties are going to contest the court-postponed local bodies polls, or even any future by-election in Tamil Nadu, as allies -- until a clearer picture emerges on the LS poll scenario in the months and years ahead of 2019. 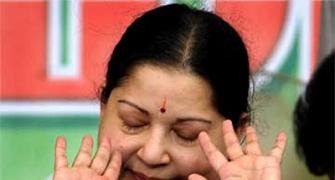 The calculations behind Jaya's opposition to GST 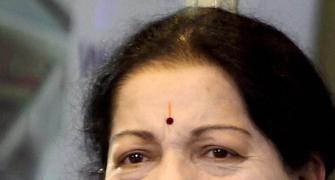 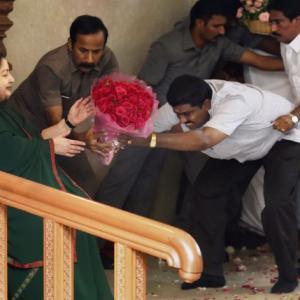 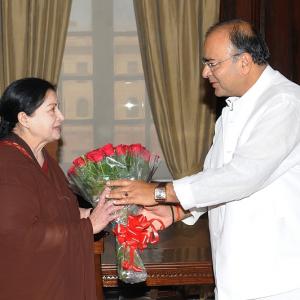 A meeting of minds? Or a bouquet of questions?