The military brass is learnt to have apprised Modi about the evolving situation in eastern Ladakh, though officials maintained that the agenda of the pre-scheduled meeting was to discuss the ambitious military reforms and ways to boost India's combat prowess.

The meeting came hours after the top four generals briefed Defence Minister Rajnath Singh about the situation in Pangong Tso lake, Galwan Valley, Demchok and Daulat Beg Oldi where the Indian and Chinese troops were engaged in aggressive posturing for the last 20 days.

People in the military establishment said the prime minister was briefed about the situation in Ladakh. There was no official comment or details available about the meeting.

Official sources said NSA Doval has been closely monitoring the evolving situation along the Line of Actual Control in Ladakh as well as in north Sikkim and Uttarakhand.

"China's strategy to put military pressure on India will not work. We want restoration of the status quo along the LAC," said an official on the condition of anonymity.

In the meeting, the top military brass is learnt to have apprised Modi about the implementation of key infrastructure projects along the LAC, the de-facto border with China.

Official sources said India will not stop infrastructure development projects in strategic areas along the nearly 3,500-km Sino-India border, notwithstanding China's well-coordinated efforts to stall them by attempting to vitiate the situation in areas like eastern Ladakh.

It is learnt that the defence minister has already conveyed to top military brass that there was no need for reviewing the implementation of any of the key projects along the LAC in Ladakh, Sikkim, Uttarakhand or in Arunachal Pradesh.

In view of the nearly 20-day standoff between the two sides, the Indian Army has significantly ramped up its presence in sensitive border areas in North Sikkim, Uttarakhand and Arunachal Pradesh besides Ladakh to send across a message that India will not be wilting under any aggressive military posturing by China, the sources said.

The Chinese side has been particularly peeved at India laying a key road in the finger area of Pangong Tso Lake region besides another road connecting the Darbuk-Shayok-Daulat Beg Oldie road in Galwan Valley.

The situation in eastern Ladakh deteriorated after around 250 Chinese and Indian soldiers were engaged in a violent face-off on the evening of May 5 which spilled over to the next day before the two sides agreed to "disengage" following a meeting at the level of local commanders.

Over 100 Indian and Chinese soldiers were injured in the violence. The trigger for the incident was China's strong objection to the road being laid by India in the Finger area in Pangong Tso lake.

Since then, Chinese military has increased its strength in Pangong Tso lake, Galwan Valley, Demchok and Daulat Beg Oldi, and resorting to "aggressive patrolling" in these areas. The India Army is also carrying out similar exercise in the region, sources said.

India last week said the Chinese military was hindering normal patrolling by its troops and asserted that India has always taken a very responsible approach towards border management.

At a media briefing, external affairs ministry Spokesperson Anurag Srivastava also strongly refuted China's contention that the tension was triggered due to trespassing by Indian forces on the Chinese side.

In the meeting with the prime minister, sources said, Gen Rawat apprised him about the implementation of the recommendations by the Lt Gen (retd) Shekatkar committee for military modernisation.

The government has accepted almost all recommendations of the panel including ways to bolster border infrastructure.

Source: PTI  -  Edited By: Roshneesh Kmaneck© Copyright 2020 PTI. All rights reserved. Republication or redistribution of PTI content, including by framing or similar means, is expressly prohibited without the prior written consent.
Related News: Line of Actual Control, Ladakh, The India Army, Pangong Tso, China
SHARE THIS STORY
Print this article 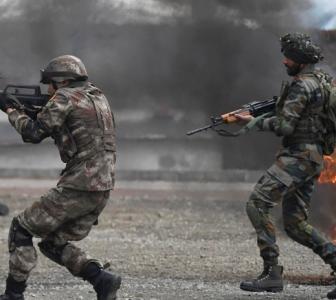