News
Business
Movies
Sports
Cricket
Get Ahead
Money Tips
Shopping
Sign in  |  Create a Rediffmail account
Rediff.com  » News » India must not be carried away by Israel's bluster

'The real challenge cannot be underestimated considering that this is still very much a "boutique relationship" -- a transactional relationship at its core based on its utility value to both countries -- but enveloped in an aura of romance,' says Ambassador M K Bhadrakumar. 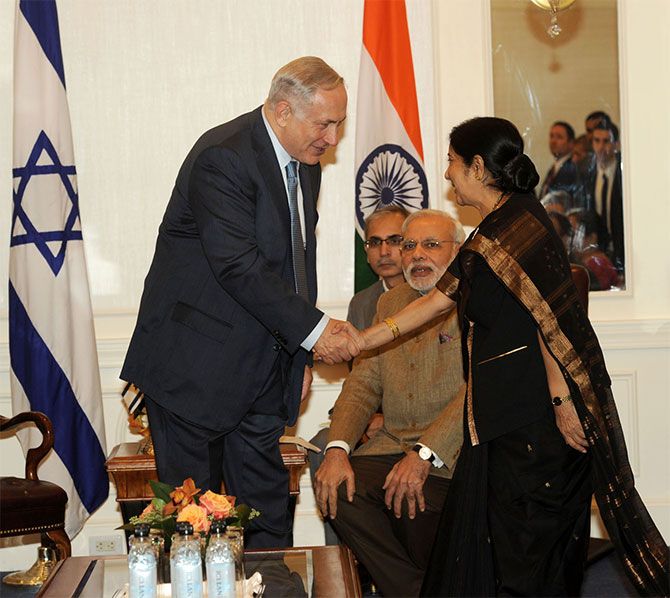 Without doubt, the India-Israel relationship enjoys 'bipartisan consensus' in both countries.

Therefore, it will be a contrived ploy to suggest that Prime Minister Narendra Modi is bringing the relationship 'out of the closet' or whatever -- as some Indian commentators seem to think.

It has been lying in the open for long enough already for all to see.

The real challenge lies somewhere else for the PM.

And that challenge cannot be underestimated, considering that this is still very much a 'boutique relationship' -- a transactional relationship at its core based on its utility value to both countries -- but enveloped in an aura of romance.

The romance arises out of a notion that it is a relationship to be somehow ashamed of for a country like India with its immense 'soft power'.

Now, that is an utterly false notion, because there is no shred of evidence to suggest that public opinion in India militates against the relationship -- or that it is a liability to the ruling party (be it the BJP or Congress) at election time.

Nor is it a foreign policy liability since Israel has fairly diversified relations with the international community. Even West Asian countries have quietly maintained contacts with it.

But that does not mean there are no contradictions in the India-Israel relations, including some serious contradictions that cannot be reconciled easily.

For a start, although the present government has adopted many of the cruel methods Israel finessed over time in quelling the mass unrest in Jammu and Kashmir, we can never ever adopt the threshold of brutality that comes naturally to Israel while dealing with unarmed Palestinian protestors.

This puts an inherent limit to security cooperation.

Fundamentally, we cannot agree with Israel's definition of 'Islamic terrorism'.

Israel lacks honesty when it speaks of 'Islamic terrorism' because there is incontrovertible evidence, including in the US observers' reports from the Golan Heights, that Israel has kept covert dealings with Al Qaeda affiliates.

Most certainly, it is not an accident that Israel is not in Islamic State's crosshairs.

In furtherance of the US-led project to destabilise Syria and overthrow President Bashar al-Assad, Israel has used Al Qaeda affiliates and IS as 'strategic assets' in recent years.

The base line is that Israel stoops too low to conquer, and doesn't hesitate to use Islamist terrorists as instruments of State policy.

How is it any different from, say, Pakistan?

Simply put, it is an abominable act to speak against terrorism and to be neck deep in the cesspool of terrorism. Expediency cannot degenerate into such crass cynicism.

So, what is this business of 'Islamic terrorism' that Israel is talking about? Prime Minister Modi should have no truck with his counterpart Benjamin Netanyahu on this score. This is one thing.

Stemming from the above, India would have grave reservations about the disruptive role Israel is currently playing in its region in causing the destruction of Syria, which has been a close friend of India.

The Israeli agenda is to balkanise Syria -- and if Netanyahu's luck holds, even annex a large swathe of Syrian territory in addition to the Golan Heights which it has been illegally occupying since the 1967 Six-Day War.

This brings us to another point. Israel is reportedly preparing to launch a ground operation to invade Syria and Lebanon.

Even as PM Modi arrives in Israel, the preparations are underway.

Three of the most important spy planes in the US inventory -- two RC-135 aircraft and a Navy P-8 Poseidon -- which can eavesdrop and pinpoint enemy radio and radar signals, have been 'snooping' off the Syrian coast over the past week.

The American aircraft carrier, the USS George H W Bush, arrived at Haifa port on July 2 on a 4-day visit -- the first time in 17 years that a US aircraft carrier is visiting Israel.

Clearly, we are witnessing a US-Israel joint enterprise here. It has two sides to it.

One, India needs to be on guard as to where its interests lie if a regional conflagration that may involve other powers ensues.

It is indeed very prudent to keep a respectable distance from whatever Netanyahu is embarking upon.

Any visuals of PM Modi hugging him might come to haunt India for a long time to come.

Equally, Israelis are good at creating a larger-than-life image of their influence over US foreign policies.

Even if that may hold good with the Trump administration to an extent, it basically remains a travesty of truth.

It is a false notion that Netanyahu can extract pro-Indian -- or anti-Pakistani and/or anti-Chinese -- policies out of Trump.

That is simply not how the US policies evolve or how Trump operates.

In fact, Trump's recent visit to Israel conveys a complex picture full of nuances which made us wonder what was really on his mind and ought to alert us to the habitual Israeli bluster when they claim to be the cat-whiskers in the Washington Beltway.

At any rate, India should meet the Trump challenge on its own steam and should have the maximum space to manoeuvre in the uncertain period ahead instead of outsourcing that work to Netanyahu.

The bottom line is that although India-Israel relations are on a stable footing today, we are in the long game in West Asia and there is an imperative need to telescope that relationship into time future.

First, Israel is a small country. Its population is one tenth that of Egypt, Turkey or Iran.

Its market is rather limited, and, while it may have strong points in select technology such a drip irrigation and animal husbandry, it economy lacks natural resources and has severe limitations in partnering with India.

Israel cannot be a viable partner to trigger a revolution in India's manufacturing sector or in its infrastructure development.

The point is, if our arms purchases are taken away, the trade turnover shrinks to nothing.

Finally, we need to be extremely vigilant about the geopolitical situation surrounding Israel.

PM Modi is returning to West Asia just after a year and it is at once obvious that the region is hardly recognisable from May 2016 when he visited Iran.

Israel has successfully kept the lid on the Palestinian problem, but the problem as such won't go away.

The wound has been cauterised, but remains unhealed, and history shows that such wounds have a way of turning gangrene most unexpectedly if the environment turns infectious.

Israel's regional policies are a road to nowhere.

It is unlikely that the strategic stalemate in the region cannot be broken -- and Israel's pre-eminence re-established -- without bringing Iran and Turkey down on their knees first and reduce them to Stone Age.

Now, that is easier said than done.

On the other hand, the current strategic stalemate, if it continues, can only work to Israel's disadvantage.

In fact, there is real danger of Israel getting sucked into the vacuum that IS and other jihadi forces that occupied Syria and Iraq are about to leave behind -- and simply unable to extricate itself out of the multiple fronts against the 'axis of resistance'.

India would do well to go step by step with Israel and should not be carried away by its bluster.