India should observe October 22 as Kashmir Martyrs Day to pay tribute to those who lost their lives to Pakistan's State terrorism, suggests Brigadier Narender Kumar (retd). Kindly note the image has only been published for representational purposes. Photograph: Kind courtesy Sainik Samachar

It was 73 years ago when Pakistan first used non-State actors as State proxies to achieve their military and political objective of merging Kashmir with Pakistan by force.

The proxy war and trans-border terrorism has continued since 1947 till date. Pakistan has not been able to liberate Kashmir, but what it has done is weakened political process, militarised societies on both sides of the Line of Control and created a flash point between two nuclear neighbours.

Major General Akbar Khan was the architect of the tribal invasion of Jammu and Kashmir. He was inspired by 17 invasions carried out by Mahmud Ghazni on India from West.

In less than ten weeks of the Partition of India and Pakistan, the plan was hatched in Lahore and Rawalpindi to invade Kashmir with Delhi as ultimate objective.

Even after 73 years and having lost half of Pakistan due to their 'scorched earth policy', Pakistan continues to pursue their ill-founded plan to destabilise India by cross border terrorism. Even after signing the 'Standstill Agreement', the Pakistani political and military leadership wanted to take advantage of the fragile security scenario in J&K.

They were aware that the state's forces were too small and ill equipped to defend J&K against the invasion from Pakistan at a time when the Indian political leadership had shown reluctance to merge J&K with India along with other 562 principalities.

The Pakistani military commander in chief rejected the idea of sending the Pakistan army to invade Kashmir.

The prime minister of Pakistan reportedly gave the go ahead for two plans, first was to raise a tribal force to invade Kashmir and second was to arm rebels in Poonch.

The Pakistani establishment was of the opinion that the majority Muslims in J&K would rise against the Hindu ruler and support the invaders.

But the local population (except a few guides) did not revolt against the state and no support came from the people to invaders. 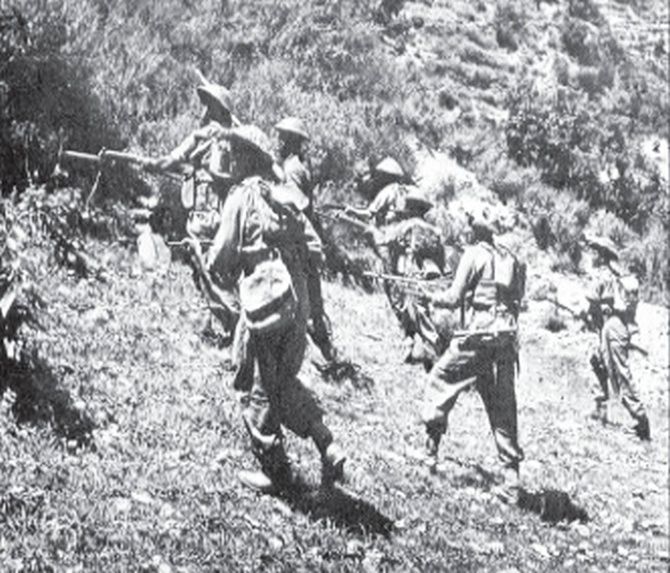 IMAGE: Indian forces push back the Pakistani invaders in the 1947 War.

Pakistan was able to raise a force of 20,000 tribes men armed with swords, muskets and axes.

The Wazir, Mahsud, Turi, Afridi, Mohmand and the Malakand Yusufzais formed the lashkars that invaded Kashmir.

The formation of the lashkars to invade Kashmir was based on a promise that the invaders could retain the war booty including gold and women once they returned from Kashmir.

This is most unbecoming of a State to dehumanise the weaker sex of society for their ill-founded political aspiration.

Since their utility to the Pakistani deep state is reduced, Pakistan has turned their guns against these tribes when they sought self-determination and raised voice against the autocratic oppressive regimes in Islamabad. 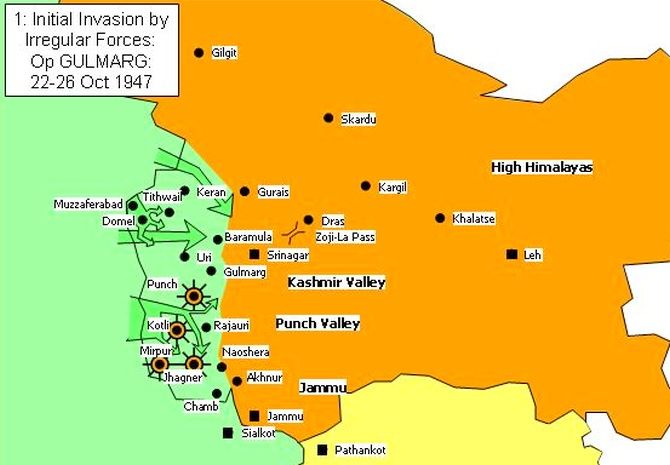 The first target of the invaders was Muzaffarabad and Mirpur. The attack on Mirpur and Muzaffarabad was mounted on October 22, 1947.

There was mayhem all around, looting, arson, and killing of innocent citizens who could not recite the Kalima.

In three days, the town was ravaged and people displaced. Hindu and Sikh families were either killed or they criss-crossed the jungles and hills to reach Jammu.

After three days of unprecedented brutality, the lashkars moved towards Srinagar. The capture of Mirpur and Muzaffarabad was considered a great victory by the unscrupulous Pakistani establishment and the plan was made to rush to Srinagar before Indian forces could reach Srinagar.

The attack on Baramulla commenced on October 24 with little resistance from the J&K forces. The tribesmen went berserk, looting killing and destroying everything that came in their way.

They picked up young woman as human slaves and killed children, old woman and men of all ages.

The invaders did not spare even the St Joseph's Hospital, where the raiders stormed in and killed patients, medical staff and burnt down the hospital building.

Nuns performing their duties at St Joseph Hospital and School in Baramulla were raped and killed by these barbarians.

Perhaps the most ghastly act in recorded history when the sick and wounded were killed in cold blood by Pakistan's proxies. Winter then set in Kashmir and the operations had to be stalled. The invaders returned to Pakistan with their war booty, some had brought cattle, some horses.

Most of them had brought arms, and many took Hindu women whose fate remains unknown till date since their family members were killed.

Ultimately, the tribesmen returned defeated without achieving their objective of capturing the Kashmir Valley.

In the spring of 1948, the Pakistan army formally came to occupy the positions held by the lashkars after they were pushed out of the Kashmir Valley.

The war saw some great accounts of bravery beyond the call of duty including Brigadier Mohammad Usman -- later known as Naushera ka Sher -- who thwarted Pakistan's evil designs and prevented the isolation of Poonch and stopped the advance of the Pakistani lashkars supported by the Pakistan army towards Jammu.

Brigadier Rajender Singh also displayed exemplary courage in the face of the enemy and laid down his life to save the Kashmir Valley. 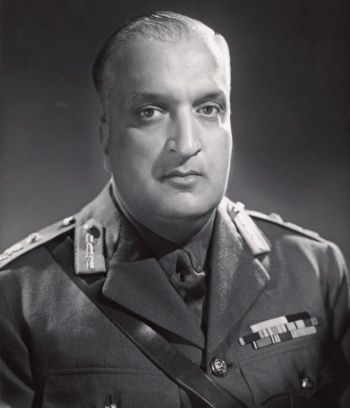 If the Indian Army had not reached Srinagar on October 26/27, the city would have been a huge desolate graveyard.

In Badgam alone more than 200 Sikhs were killed while defending the honour of their woman and children from the invaders.

Pakistan has never apologised for the human rights violation committed by its army and non-State actors for the war crimes in 1947-1948.

The strategy of using non-State actors as Pakistan's State policy remains in vogue even today, violating the laws of armed conflict. Separatists in the Kashir Valley sadly observe October 27 as a black day since the Indian Army landed in Srinagar on that day in 1947 and stopped the march of the invaders towards Srinagar.

The separatists have forgotten how their ancestors lost their families to these invaders. There are some Pakistani terrorists who proudly claim that their ancestors had come as part of the lashkars to liberate Kashmir in 1947-1948 and are known now as mehmani mujahideen.

The people of Kashmir need to be reminded that Pakistan has brought misery and misfortune to them since 1947-1948. Their fate will be similar to the Pathans of Pakhtunkhwa who were used by Pakistan and now stand dumped.

It is sad that neither the United Nations Human Right Commission nor Amnesty International has taken cognisance of this carnage sponsored by Pakistan.

Shamelessly, the Pakistani establishment deems it a good victory with no remorse for the loss of rhe lives of innocent civilians.

The 1947-1948 invasion of Kashmir by Pakistan sponsored non-State actors can best be described as Kashmir's Holocaust.

India should observe October 22 as Kashmir Martyrs Day to pay tribute to those who lost their lives to Pakistan's State terrorism.