Major Somnath Sharma was awarded the Param Vir Chakra posthumously for his bravery in the Kashmir operations in November 1947.

We salute this hero whose courage has inspired hundreds of thousands of Indian soldiers with this 2006 Rediff.com feature by Claude Arpi: 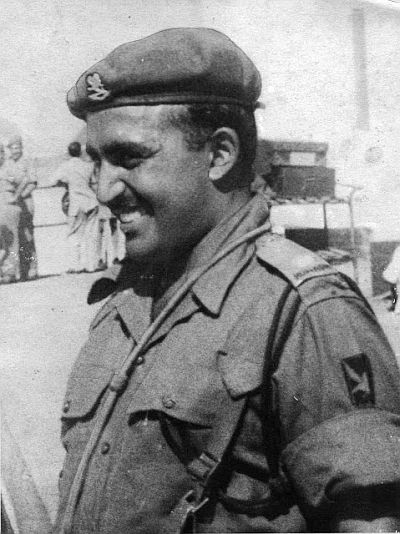 The time has come to remember a true martyr: Major Somnath Sharma who on November 3, 1947 saved Srinagar airport (and Kashmir) at the supreme cost of his life.

Had he not sacrificed his life, Afzal's defenders would not today make front page news in the Indian press, for the simple reason that they would be Pakistani citizens living under a military dictatorship.

Our story starts during in the early days of October 1947 when Prime Minister Jawaharlal Nehru received a message from a former deputy commissioner of Dera Ismail Khan [one of the province's main districts] in the North West Frontier Province.

The bureaucrat warned of 'a scheme to send armed tribals from Pakistan to the Pakistan-Kashmir border; some of them had already moved towards the area in transport provided by the Pakistan government. Arms confiscated from non-Muslims had been supplied to these tribals.'

As Maharaja Hari Singh of Kashmir was reluctant to sign the Instrument of Accession to India, Nehru refused to take any action. Two weeks later a large contingent of Afridis, Mahsuds, Wazirs, Swathis and regular soldiers of the Pakistan army 'in mufti' began to enter Kashmir.

During the night of October 22, the 'raiders' burnt the town of Muzaffarabad. They then overran Uri and captured Mahura, the electric power station, fifty miles from Srinagar. The city of Srinagar was plunged in darkness.

In these dramatic circumstances, V P Menon, Sardar Patel's faithful collaborator, went to Jammu and got Hari Singh's signature on the printed Accession Form. He rushed back for the historic meeting in Delhi with India's governor general, Lord Mountbatten in the chair.

A young army colonel named Sam Manekshaw, who attended the meeting, recalled: 'As usual Nehru talked about the United Nations, Russia, Africa, God Almighty, everybody, until Sardar Patel lost his temper. He said, 'Jawaharlal, do you want Kashmir, or do you want to give it away?' He [Nehru] said, 'Of course, I want Kashmir.' Then he [Patel] said: 'Please give your orders.'

Everything then moved very fast. Early the next morning, the first troops and equipment were airlifted from Palam airport [in Delhi] to Srinagar. A young major was sent on his first assignment to Kashmir. He was responsible for the logistic. His name was S K Sinha (today the governor of Jammu and Kashmir).

He later wrote about the first Indian jawans reaching Srinagar: 'It was indeed inspiring to see grim determination writ large on their faces. They were all determined to do their best, no matter what handicap they had to contend with. I had never before seen such enthusiasm and fervour for duty.'

They knew that all eyes in India were focused on them. At Srinagar airfield, just before returning to Delhi, Sinha met an old friend, Major Somnath Sharma of 4 Kumaon. He had come a day earlier from Delhi with a broken arm.

Sinha found him 'rather disgusted with life.' With his 'wretched hand in plaster,' no one would give him 'an active assignment in Delhi.'

His company had now been posted to Kashmir, but he was looking to be relieved soon from his present job and given 'something really active.' His company's duty was 'only' to protect the airport.

Sinha tried to impress on Somnath 'the vital importance of the airfield to us and in that context the importance of the task assigned to him,' but says the governor this 'sermonising could do little to fulfill his desire for being sent further forward.'

After spending an hour discussing and sipping a mug of tea reclining on his kitbag, Sinha left for Delhi. 'Little did I then know that within the next forty-eight hours, he was to die a hero's death and earn great renown, fighting most gallantly in very close proximity to where we then lay talking so leisurely.'

But let us spend a moment on Somnath Sharma's life.

He was born as the eldest son of an army family. His father General A N Sharma, who retired as the first director general of the Armed Medical Services after Independence, was often in non-family postings.

Som, as his friends and family called him, used to spend time with his maternal grandfather Pandit Daulat Ram in Srinagar. His favourite pastime was listening to his grandfather's on the Bhagavad Gita. This influence of Krishna's teachings to Arjun were to remain with Somnath till his last breath.

At the age of 10, Som enrolled at the Prince of Wales Royal Military College in Dehra Dun and later joined the Royal Indian Military Academy. As a young lieutenant, he chose to join the 8/19 Hyderabad Infantry Regiment.

His maternal uncle Captain Krishna Dutt Vasudeva who belonged to this regiment had died defending a bridge on the River Slim in Malaya against the Japanese. His bravery had made it possible for hundreds of his jawans to cross over to safety. The example of his uncle greatly influenced him during his career.

Somnath fought in World War II under Colonel K S Thimmayya (later the army chief) in Burma with the British Army. An anecdote speaks tellingly about the character of the young officer.

One day, Sharma's orderly Bahadur was badly wounded in action and was unable to return to the camp. Sharma lifted Bahadur on his shoulders and began walking. When Thimmayya found his officer lagging behind under the weight of his orderly, he ordered him -- 'Leave this man, Som and rush back to the camp.'

Somnath retorted, 'Sir, it is my own orderly that I am carrying; he is badly wounded and bleeding, l will not leave him behind.' He eventually managed to carry Bahadur back, saving his life. He was awarded a 'Mention in Dispatch' for this act of bravery.

After the Japanese surrender in Kuala Lumpur in September 1945, Somnath returned from Malaya via Calcutta. Before landing, a small incident occurred when the British Military Police came aboard to check for contraband.

Som had an unauthorised pistol unofficially presented to him by some Japanese officer in addition to a Samurai sword (officially allotted to each officer). Somnath refused to lie or invent a story to bluff the British officer, he immediately threw the pistol into the sea through a porthole. Such was his straightforwardness!

Two years later, India became independent, but fell prey to mad communal fighting. With his Kumaonis, Somnath was dispatched to aid the civil administration. From his headquarters at Parliament Street police station, he spent his time extinguishing fires between the two communities -- both well armed.

To complicate the matter, streams of refugees were pouring in wave after wave to the capital. The Kumaon Regiment rose to the occasion, doing their duty honestly and impartially towards both communities. At that time, Somnath was moving around with his broken arm and a plaster from the wrist to the elbow.

When his company was ordered to move to Srinagar, Somnath, though technically 'unfit for active duty in war' insisted that he had to lead his company.

Before leaving for Srinagar, he spent his last night in Delhi with Major K K Tewari, his best friend and Burma companion, at the Queen Victoria Road bachelor Officers' Mess in Delhi.

They chatted late into the night. Somnath remarked at one point that he was going to war again but alone this time (without his friend). Having probably some premonition, he asked for a memento from Tewari who told him that he could take whatever he wanted from the room. Somnath went straight to the cupboard and took his automatic pistol, a German Luger. Quite upset, Tewari had no choice but to honour his promise.

The next morning Somnath Sharma landed in Srinagar (where he met S K Sinha). The situation was fast deteriorating.

Two days later on November 3, the 'raiders' reached Badgam a few miles away from the Srinagar airfield. Brigadier 'Bogey' Sen, the commander in Srinagar, immediately dispatched Sharma and his company to Badgam.

At 2:30 pm, supported by 3-inch and 2-inch mortars, a 700-strong tribal force attacked the Indian jawans. Being outnumbered by 7 to 1, Sharma immediately sent a request to Brigadier Sen for reinforcements.

He knew that if the enemy advanced any further, the airport would be lost and Kashmir would become a province of Pakistan; the airfield was the only lifeline between the Valley and the rest of India.

His last wireless message to the headquarters stated: 'The enemy are only 50 yards from us. We are heavily outnumbered. We are under devastating fire. I shall not withdraw an inch but will fight to the last man and the last round.'

Soon after, Somnath Sharma was killed by a mortar.

By the evening, when reinforcement reached Badgam; it was too late. The Kumaonis had suffered over 50 per cent casualties though they had inflicted much heavier losses to the 'raiders' who lost 200 men and the airport and Kashmir.

The citation read: 'Keeping his nerve, he skillfully directed the fire of his section into the ever-advancing enemy. He repeatedly exposed himself to the full fury of enemy fire and laid out cloth airstrips to guide our aircraft onto their targets in full view of the enemy. His leadership, gallantry and tenacious defence were such that his men were inspired to fight the enemy outnumbering them. Major Sharma set an example of courage and qualities seldom equaled in the history of the Indian Army.'

Three days later, Sharma's body was recovered. Though mutilated beyond recognition, a few pages of the Gita that he always kept in his breast pocket and the empty leather holster of Tewari's pistol helped to identify the body. The pistol was gone.

During the last chat with his friend before flying to Kashmir, Somnath had joked that either he would die and win the Victoria Cross or become the army chief. It is his younger brother V N Sharma who in 1988 became chief of army staff.