Gotabaya Rajapaksa's impressive win in Sri Lanka's presidential elections owes as much to his tough image going back to his defence secretary days when he was the architect of the military rout of the LTTE as much to his brothers Mahinda and Basil. 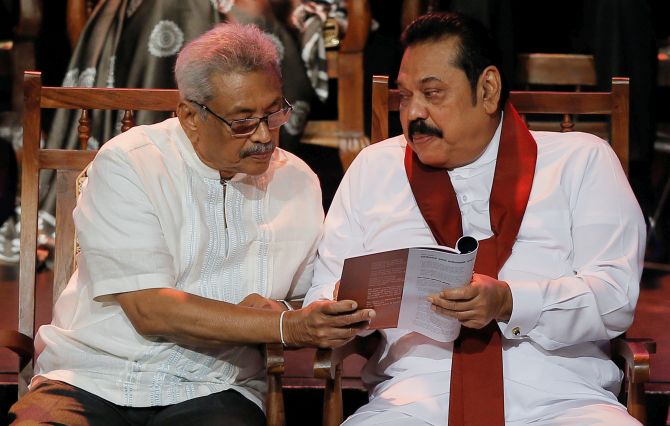 In a way, the poll victory should be Mahinda’s more than Gota’s. At another level, it should be that of all three Rajapaksa brothers, including campaign strategist Basil -- what with the oldest of them and former parliamentary speaker, Chamal R, having retired from active politics after Mahinda’s poll defeat four years back.

To Mahinda should go the credit for building up a strong and personalised Sinhala South constituency, which at its lowest remained at 40 per cent, in the nation-wide local government polls of February 2018, akin to the civic polls in India.

In the presidential polls of 2015, which he lost by less than four percent vote-share, or fewer than two lakh votes, Mahinda polled a very respectable 47 per cent, against victor Maithripala Sirisena’s 51 per cent. The Rajapaksas lost only two percentage vote-share in the parliamentary polls that followed eight months later, also in 2015.

Compared to Mahinda’s presidential outings, Gota’s maiden victory is even more impressive, given that his adversaries wanted the nation to believe that he was a novice in politics despite his long association, first as the war-winning defence secretary, and later also as the beautifier of capital Colombo, during brother Mahinda’s first and second terms, respectively.

Yet, when the votes got counted and Gota was seen as defeating his nearest of 24 rivals, outgoing housing minister and rival UNP’s deputy leader Sajith Premadasa, by a very respectable 13-lakh vote margin in a nationwide poll on November 16, it was as much a positive vote for the man as for the Sinhala voter’s perception of his decisiveness and no-nonsense approach to public administration, whatever be his other pitfalls in the eyes of the rest of the nation and the international community (read: West).

It is not that Gota’s 52-plus per cent vote-share in an election in which the winner has to score more than half the cast and valid ballots, was too high. But rival Sajith Premadasa’s 42 per cent was not an honourable vote-share for the loser from the nation’s GoP, especially given his own parentage.

While it may be true that the Rajapaksas have established themselves as dynastic rulers, they are not the first in a nation which became the first modern electoral democracy in Asia as far back as 1931, nor the only ones. The rival UNP, dominated by outgoing prime minister Ranil Wickremesinghe, which obtained Independence from British colonial rulers, and the breakaway rival in the SLFP of the Bandaranaikes remained dynastic parties until the Rajapaksas broke the mould in 2005.

If instead of Gota R, Sajith Premadasa had won the presidency this time, it could well have ushered in a fourth political dynasty at the top of Sri Lankan polity and government. However, implications, meanings and interpretations of what constitutes ‘dynastic rule’, may differ -- some composed and imposed by political campaigners and NGOs and INGOs backing them, on the national psyche.

The third of the Rajapaksa tripod that has won the election this time against all political odds is Basil R, the campaign strategist, first of Mahinda in his time (including the one that the latter lost in 2015) and now for Gota.

Basil had the figures on his finger tips, even months ahead, of the need for a minimum of 25 per cent Tamil and 35 per cent Muslim votes for Mahinda to make it to an unprecedented third term for any executive president under the Second Republican Constitution, 1978.

Basil’s strategy included the Rajapaksas wooing the parent SLFP under outgoing President Sirisena, who had no electoral takers, both within the party and outside, as against his earlier and successful attempt in 2015. This meant that with SLFP-UPFA’s 13 per cent vote share in last year’s local government polls adding to the Rajapaksas’ 40 percent, Gota would get a comfortable 53 per cent -- which is what the victor finally got.

A day before declaring the Gota candidacy, Mahinda as the newly-minted president of the breakaway Sri Lanka Podujana Peramuna (SLPP) that they had launched less than two years earlier, had declared that he would be the future prime minister if his brother was elected president.

On the face of it, this might have sounded as if Mahinda has not given up on electoral ambitions after a decisive defeat -- but the message was for the constituency that had got used to voting for him.

It is another matter that Gota was also the only candidate from his inner circle to whom Mahinda could have ‘transferred’ all his votes without slippage, seepage and wastage. And the Rajapaksas, despite the solid 40 per cent committed vote-share, needed every one of those votes in the presidential election and every additional vote.

That way, the additional 13 per cent that Gota, a Sri Lankan Army veteran did a course in at India’s Defence Services Staff College, Wellington (Tamil Nadu), got might have to do more with the public perception of him as a decisive and forward-looking leader, who had taken on the international community with equal ease on war-time probe demands as the LTTE terror group, nearer home.

Much more than outsider perceptions of a Sinhala-Buddhist hard-liners vote for Gota, it is the anti-incumbency sentiment against the messy and unfocussed administration of the Sirisena-Wickremesinghe duo that pushed the ranks of non-committed voters to Gota’s side.

Sri Lanka may have had its own share of problems through the previous decades, over which the voter did not have control (like LTTE) but on this one, they felt they could do something about it -- that too after voting out the older Rajapaksa the same way only five years earlier.

The 10-15 per cent ‘swing’ or ‘non-committed voters’, who evaluate the performance of the party and leadership in power, has given its verdict, loud and clear. This, despite the inexplicable yet one-sided voting of the minority Tamil, Muslim and upcountry Tamil communities continuing to go the whole hog against the Rajapaksas and to the exclusive advantage of rival Premadasa.

Having voted the anti-Rajapaksa camp to power, in hope of better governmental performance, going beyond war victory, peace, security and political stability -- and of course for a breath of ‘free air’ -- the voter has sent out a message that he is not going to sit on judgment over the relatively distant past of competitive politicians, who will always have something or the other to dig up and show up before the popular microscope.

The voter needs result-oriented performance, and on all fronts. For the new president and his government, it would include stability and security even if of the misunderstood Rajapaksa kind, after instability and non-performance of the previous years, highlighted also by the ‘Easter Sunday serial blasts’, where every politician and bureaucratic top brass was busy passing  the buck without owning up anything.

People need jobs, controlled prices and a sense that the government leaders are addressing economic concerns without stopping with robbing the national exchequer through the likes of the ‘Central Bank bonds scam’ of the outgoing government kind -- and more importantly, a greater sense of money circulation and in access for the common man as different from money in circulation.

That is also the message that the voter has handed over to President Gota Rajapaksa and team now -- and may have an early occasion to evaluate the performance against promises and expectations (a dicey affair), in the parliamentary and provincial council polls, the former due by August next and the latter long overdue.