News
Business
Movies
Sports
Cricket
Get Ahead
Money Tips
Shopping
Sign in  |  Create a Rediffmail account
Rediff.com  » News » If Yogi Wins UP.. If Yogi Loses UP...

If he doesn't win next year, it will set back the party's prospects in 2024.
If he wins, it will be seen as his win as much as the BJP high command's, points out Shekhar Gupta. 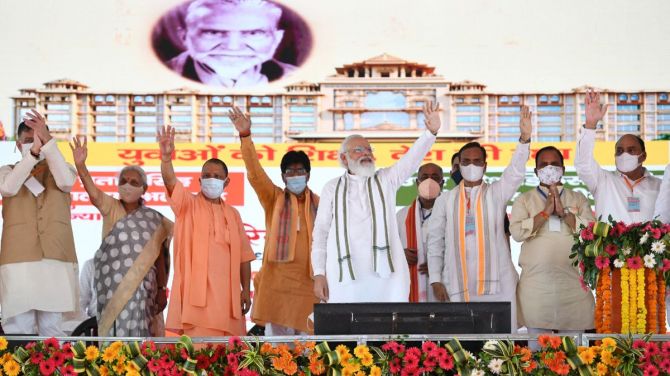 Narendra Modi turned 71 two Fridays ago. The scale on which his government and party celebrated it created waves across the country, and also some whispers in central Delhi's usual gyani circles.

But why such extraordinary celebrations for the 71st? Now, who is to answer that question, particularly under a dispensation that claims great and justifiable pride in not letting anyone, not even the self-proclaimed Shankaracharyas of political punditry, get a whiff of what's on its mind.

The number 8, for example. I am not buying into any part of it of course, but only mentioning it as an admission of how little people like us, who hold forth on Indian politics 24x7x365, know about what's going on in the Modi-Shah BJP.

When a political party and its government succeed in conducting its affairs in such secrecy, the subterranean rumour bazaar always thrives.

As it does now. But among the many 'expert' theories, 'inside' stories, 'educated' guesses that float, you never hear one question: After Mr Modi, who?

Looking far until 1947 in the rear view mirror, we note an interesting little fact.

After Jawaharlal Nehru, Mr Modi will only be the first to step into his seventies as India's serving prime minister.

P V Narasimha Rao, before you catch me, became PM only a week short of his 70th.

We know that the definitions of age, vintage, and ageing have changed over the years, and that seventies is now the new sixties, but let's still use Nehru at 71, in 1960, as a reference point.

By this time, the 'After Nehru who' clamour was already building up.

There are similarities and sharp differences in that situation and now.

Then, as now, the question 'who' was not about from which party.

Indian politics was then even more a one-horse race than it may seem now.

So, the succession question was from within the Congress.

Until someone from the opposition parties rises as a credible challenger to Mr Modi in 2024, the same logic would apply to the BJP.

If you were a betting person, for example, what futures would you rather buy today for the 2024 outcome? Never mind your own voting preferences.

That's why no discussion, debate, whispers, nothing on the question of who will lead a BJP government -- if there is one -- after Mr Modi.

The prime minister has imposed an age limit of 75 for his party people in office.

RSS chief Mohan Bhagwat has repeated the same commitment for his organisation.

Since there can always be a Modi exception, never count him out.

We know that increasingly political parties have become cults around a leader or a dynasty.

But, as Haryana's veteran Om Parkash Chautala famously said, we come to politics because we want power.

How do the odds stack up for me in the line of succession?

Can you fault, or judge anyone in the BJP for reflecting on his future? 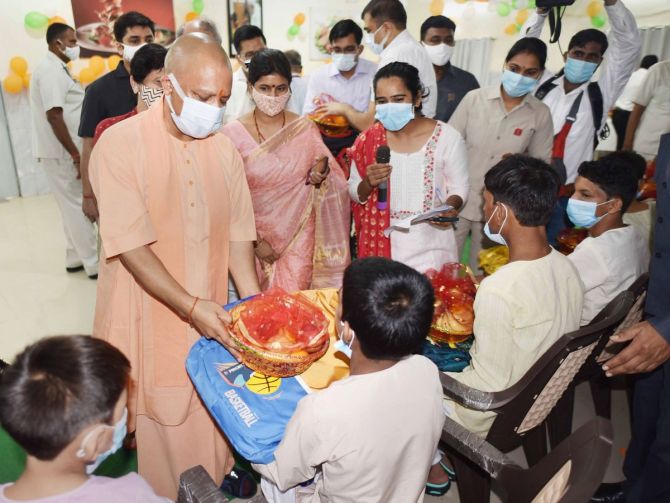 We aren't astrologers. We interpret politics by seeing evidence. We can see and show.

If you survey the 'A' team in the BJP's politics today, it is easy to see who belongs, and ranks where.

Remember also, that this is that era when the RSS is at its weakest.

That said, look back on some political events over this past week.

Just as Mr Modi and Mr Shah were bringing about this dramatic purge in Gujarat, headlines were taken away by their chief minister in Uttar Pradesh, Yogi Adityanath, with his unhesitatingly, or in fact deliberately divisive 'Abba Jaan' war cry in a public speech that looked like the launch of his re-election campaign.

Names bigger than him in the BJP at this point may have said things more risque than this, so let's leave this aside.

Which chief minister is spending the most on advertising to promote himself or herself? You can add Arvind Kejriwal, Mamata Banerjee, Uddhav Thackeray and any of the others you might choose and Yogi will beat them 3:1 if not more.

Yogi is the only one who has plastered Delhi's vaunted bus shelters with portraits of himself sharing space with Mr Modi.

Hoardings keep popping up in other parts of Delhi too, including the diplomatic zone.

We know that many UP voters commute for work to Delhi.

But, the same also applies to Haryana.

Seen M L Khattar on any such in Delhi? 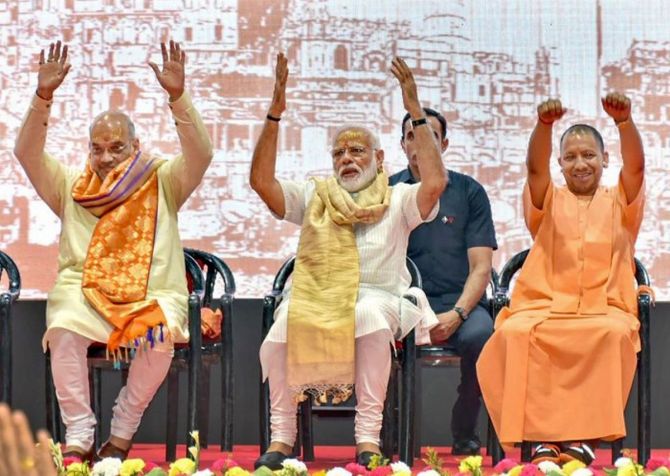 All of us commentators, on the Left, Right, Centre or unhyphenated like us at ThePrint, broadly agree on one thing: That the BJP is now as much a high command-run party as the Congress was at Indira Gandhi's peak.

So here's the trick question: Is the state government of Uttar Pradesh, and its chief minister, also high command-run?

Check out some exhibits besides the advertising.

Former civil servant and Modi loyalist A K Sharma, sent to Uttar Pradesh obviously with some purpose, has been floating, without a ministry or power.

His consolation price is to be a vice-president of the state unit of the party.

Just that he's only the 17th, rubbing shoulders with 16 others in the state.

It is inconceivable for any other BJP chief minister to treat a high-command nominee thus.

If you even suggested it to a fourth term chief minister like Shivraj Singh Chouhan, he will kick you out of his room and spray gangajal to purify the place where you might have been sitting.

A handpicked cabinet, ministers mostly with no power, a government run by trusted civil servants.

It was such a success in the state that it won him three successive elections.

He brought it to Delhi too.

Yogi is doing the same thing, but then he's making UP into a mirror image of what Gujarat was under Mr Modi.

But in Lucknow, Yogi chooses his own, allocates portfolios and of course keeps all powers with himself.

And Yogi's got the smarts.

When he delivered that abba jan speech he had a much larger than life portrait of Mr Modi as his backdrop and referred to him several times, fawningly in his speech.

For removal of ambiguity: Nobody is going to challenge Mr Modi in the BJP.

He can rule the party for as long as he wishes.

Yogi won't and can't challenge him either.

Within the BJP, however, another power centre is rising.

At 49, he's among our youngest top leaders, younger than even Kejriwal.

He isn't originally from the RSS, but already holds a large appeal within the BJP's hardcore base.

As the latest India Today Mood of the Nation Poll showed he's seen to be the second-most popular choice for prime minister among BJP voters.

Mr Modi's the first by a long distance.

And again for clarity, while the BJP base adores him more than anybody after Mr Modi, he isn't capable of getting the votes beyond the base that gives Mr Modi's BJP a clear majority. 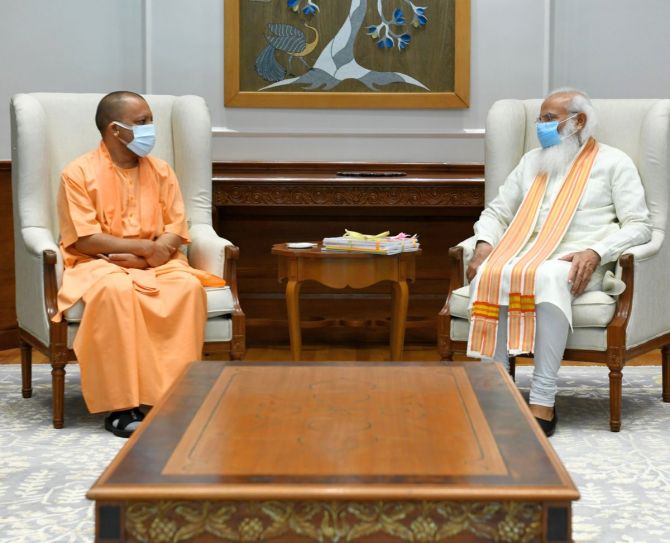 Until a year ago, we could say that there was at least one other BJP satrap who held his own with the high command.

It changed this year with the removal of B S Yediyurappa in Karnataka.

Yogi is not such a pushover. And he's got his high command in a tough situation.

If he doesn't win next year, it will set back the party's prospects in 2024.

If he wins, it will be seen as his win as much as the high command's.

And that will have consequences for the BJP, going ahead. 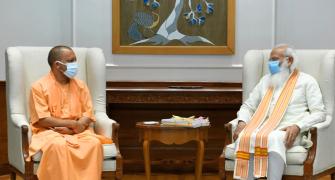 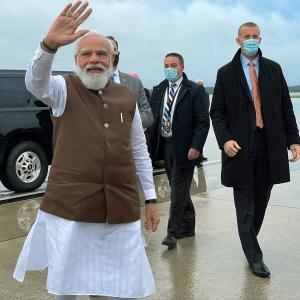