News
Business
Movies
Sports
Cricket
Get Ahead
Money Tips
Shopping
Sign in  |  Create a Rediffmail account
Rediff.com  » News » How the RSS plans to win Assam for the BJP IMAGE: Women line up to cast their vote during the second phase of the assembly elections in Guwahati on Monday, April 11, 2016.

The real brilliance of this RSS campaign lies in building a dominant power base with, and for, a mostly non-RSS leadership.
That is why the rise of the BJP in Assam is their standout victory, says Shekhar Gupta.

Every Bharatiya Janata Party victory is routinely attributed to the Rashtriya Swayamsevak Sangh. But we know that while the RSS helped, 2014 was Narendra Modi's success just as 1998-1999 were Atal Bihari Vajpayee's.

Funnily, in 1984, even Rajiv Gandhi's landslide, reducing the BJP to two MPs in the Lok Sabha, was partly (and unfairly) credited to a shifting of RSS sympathies.

In my book, however, the RSS can now enjoy its first, self-made political victory -- irrespective of the final result of Assam's election.

Win or lose, the BJP is Assam's front-runner, from being non-existent three decades ago except for thousands of committed RSS workers, pracharaks and strategists brought in from all over. How they sowed the first seeds of their ideology, co-opted the massively popular Assam movement, converted its ethnic-chauvinistic impulse into an anti-Muslim one, built a launch pad for the BJP and then conjured up a local leadership is the stuff of political folklore.

The BJP is not just the front-runner now, but has built an unprecedented alliance with Bodo tribals, cherry-picked talent from regional leader Asom Gana Parishad and now even the Congress -- never mind the fact that none of them has any past connection with the Sangh Parivar.

The All Assam Students Union-led Assam movement, whose kurta-trails the RSS latched on to late 1970s onwards, and which morphed into the AGP following the 1985 peace accord with Rajiv Gandhi, has now been fully co-opted and reduced into a bit player. Credit for most of this should go to the RSS.

I tried making sense of it walking the familiar old Brahmaputra promenade, the river on the left and on the right the zone that formed the epicentre of the Assam movement. I retraced my steps to the tiny Shukreshwar Temple astride the embankment.

Like other reporters then, I would climb these steps often to meet a single man with a mysterious half-smile. Kumud Narayan Sarma, whose family had hereditary control of the temple, was dean of the law faculty at Guwahati University and lived in its one-room outhouse.

His fame came not from his scholarship, but from the power of his favourite 'students,' the leaders of AASU, to whom he was formally an advisor. Everybody agreed there was something intriguing about AASU's key interlocutor, who left then home minister Zail Singh infuriated with his talk-talk/fight-fight approach.

I could never say so conclusively, but there was much to him that suggested a deep RSS connection, beginning with his utterly spartan lifestyle in the compound of his little old temple, and the understated suppleness with which he handled his enormous power. He, along with his wards, was also incorruptible, which Zail Singh and his spooks complained about most of all.

His name came back this week as I walked the area with Himanta Biswa Sarma, a former AASU leader-turned-United Liberation Front of Assam activist-turned Congressman and now the BJP's most significant acquisition nationally, post 2014.

He was effectively the number two in Tarun Gogoi's cabinet, the Congress party's Pramod Mahajan (for political networking) and Nitin Gadkari (performing minister) rolled into one in Assam, and a self-made media baron (or OK, merely the husband of Riniki Sarma, the media baroness).

In August last year, he defected to the BJP, frustrated by the rise of Gogoi's son. His own journey from the AASU to ULFA to the Congress and now the BJP illustrates the story of the RSS's dogged brilliance here.

Sarma joined AASU as a 12 year old just when the state was slipping into an insurgency and, inevitably, gravitated to the extremist ULFA fringe. It was Assam's darkest phase with kidnappings, bombings, ambushes and, inevitably, a spate of secret killings by the police and its vigilantes.

Disillusioned, he came to the Congress, challenging the mighty Bhrigu Phukan, who was to Prafulla Mahanta what Manish Sisodia might be to Arvind Kejriwal. He earned his fame beating him in 2001 in Jalukbari constituency, which the Congress could never win, and which, significantly, included the Guwahati University campus, the karmabhumi of AASU's leadership.

His defection to the BJP has altered its prospects dramatically. He still carries the heart of a Congressman, Sarma says, having never had an RSS/BJP connection. Similarly, Sarbananda Sonowal, the BJP's chief ministerial candidate, would say he carries the heart of an AASU activist. As would almost every other key Assamese leader of the BJP.

An entire new leadership been created in the state by luring away talent without worrying about ideological purity. If the BJP does win power in Assam, at least two-thirds of its ministers would never have worn khaki shorts.

The Assam movement was fuelled by ethnic chauvinism. It started as an anti-outsider (Bahiragata) movement, mainly targeted at both Muslim and Hindu Bengalis and Marwaris. The RSS saw promise in this, but had to deal with the contradiction of ethnicity and religion.

In my 1984 book, Assam: A Valley Divided, I had recorded a 1982 conversation with K S Sudarshan, then Bauddhik Pramukh, or intellectual chief, of the RSS, and later Sarsanghchalak, where he expressed frustration at the agitators targeting both Hindu and Muslim Bengalis. "Hindu toh arakshit hai (the Hindu is unprotected)," he said repeatedly -- implying where would Bangladesh's Hindus find refuge, if not in the adjoining states of India?

Sonowal now tells me one of the big contributions the RSS made was to change the national image of the Assam movement, which was seen as anti-national because it blockaded crude supplies to the mainland.

The movement leaders started seeing the RSS as friends. The RSS worked patiently -- I believe helped along by sympathisers like Kumud Sarma and some former local civil servants -- to shift the emphasis fundamentally from anti-immigrant to anti-Muslim immigrant.

Popular hatred and fear of the Bongali, in this ideological transformation, became anti-Muslim immigrant, or Mian Manus, pejoratively.

This RSS mission got a divine gift in the rise of Badruddin Ajmal. Muslims, particularly immigrants, gravitated to him en masse, depleting the Congress vote banks and leaving it confused: If it aligned with Ajmal, its voter base would be lost; if it didn't, it would be fully divided.

The Congress carried on because Gogoi's conciliatory personality brought back peace, economic growth and confidence, and because the AGP had split many times and its rump under Mahanta was in terminal decline.

The core Assamese vote bank was thus divided too and the Congress was comfortable with a bit of this and that (Muslims, tribals, Assamese Hindus) and much of the rest: Ahoms (represented by Gogoi) and five other sub-tribal groups, tea garden labour and Bengali Hindus.

The RSS changed that by working assiduously among them over the decades.

Between the pragmatism of the Modi-Amit Shah central leadership and the ideological flexibility of the RSS, a decision was taken to steal the entire Assam leadership from the AGP rather than wait to build its own.

By 2014, most of the BJP Lok Sabha candidates, including Sonowal, were AGP defectors. Ajmal, whose language became more communal, provided the other pole, leaving the Congress in the no-man's, or rather no-voter's, land and reduced to just one seat.

This weakened Gogoi; and the RSS/BJP decided to deliver the killer blow by stealing Sarma. Ram Madhav established contact with him and the progress was then swift.

Still waffling between partnering Ajmal and fighting him, the Congress simply watched the drama unfold.

In the process a new political force had grown in the state, with begged or borrowed talent, and riding the majority fear of a minority party, to isolate the Congress, the unchallenged rulers of three terms.

The real brilliance of this RSS campaign, therefore, lies in building a dominant power base with, and for, a mostly non-RSS leadership. That is why the rise of the BJP in Assam is their standout victory. 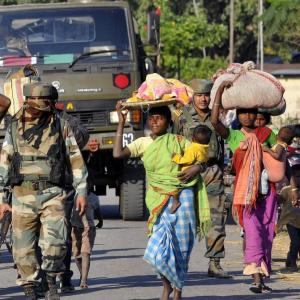