'We are in the middle of the biggest self-created crisis of this government.'
'A crisis which involves and includes citizens and affects the way we go about our lives.'
It is a crisis that is being managed poorly by the government and, it is absolutely clear, even more shoddily by the Opposition,' says Aakar Patel.
Illustration: Uttam Ghosh/Rediff.com 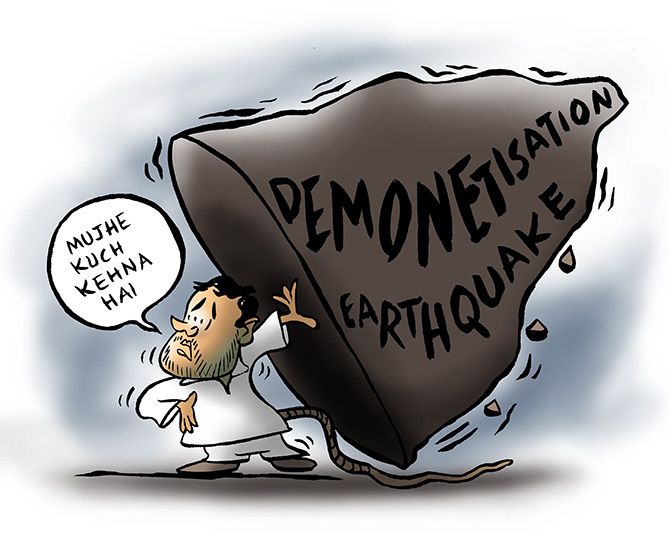 We are going through a strange political phase in India.

On the one hand, for the first time in two-and-a-half years, there is a sense that the government is in trouble.

On the other hand, there is also the feeling that the Opposition doesn't really have the talent and the ability to either express popular sentiment or to capitalise on the moment.

The issue being debated is, of course, demonetisation, an exercise that has entered the second fortnight of its second month.

Banks are still relatively low on supply, ATMs are still often not fully stocked with the right bills.

But most importantly, the initial violence of the move to take out most of India's cash is still passing through the system.

The economy looks to have been put through an action which has damaged it and there does not seem to be sufficient control over managing the instability.

There was a moment, one week after the demonetisation announcement, when it may have been possible to reverse it.

This was when the first hearings on the matter began in court and when most of the old currency was lying in the hands of the public.

That moment has passed. The money has vanished in physical terms also, into the coffers of the RBI or banks, and the new notes have not been fully distributed through the system.

The government says it will take another month, till the middle of January, before the system is stable.

Even if that is true, merely printing the money doesn't mean that the economy has received it.

The cash has to be distributed across the system and there is no real estimate of how long that will take.

Few, including the prime minister who warned us about this in his latest speech on demonetisation, believe that there is no further pain ahead.

This is the sort of moment and sort of political issue which any Opposition in a democratic space would have capitalised on.

A deliberate action that slows the economy and inconveniences hundreds of millions of people daily for months is the sort of gift that politicians in Opposition dream of.

Incredibly, the government was actually able to make gains on this in the first couple of weeks.

The media was strongly on the side of demonetisation then, and the public was shown as happy to be queuing up in support of the nation and against black money and terrorism.

The Congress said it supported demonetisation but would insist on good management so that people were not inconvenienced.

This position showed a lack of confidence and, more importantly, a lack of understanding about what was about to unfold.

It could be said, rightly, that most people including experts, had no idea that things would drag on so long. But the Congress has decades of experience governing this country at the level of Centre and state.

Surely it has enough input and data to be able to have known, and if it doesn't, then that is incompetence.

Instead it was two grassroots leaders, Arvind Kejriwal and Mamata Banerjee who from the first instance opposed the act of demonetisation unconditionally. They perhaps recognised that the action was reckless and that popular support would wane.

Sure enough, this euphoria began to blow away from the queues as the discomfort continued and the nature of the goal changed from attacking black money to securing a digital economy.

It speaks poorly of the Congress and its leader Rahul Gandhi in particular that they have not been able to introduce original phrases that would capture the tragedy of demonetisation.

In popular politics it is vital that you rally your support base with slogans. Mahatma Gandhi was excellent at doing this against the British and so is Prime Minister Narendra Modi, who is the most talented politician of our time.

The Congress has no such ability and it bumbles along, having been handed a priceless political opportunity and not knowing how to properly grasp it.

The way in which Rahul has approached the crisis makes no sense. He has first been tentative, then he has senselessly broken Opposition unity by unilateral Congress action.

He has threatened to reveal the PM's personal corruption and then changed the subject to farmers' distress when he eventually met Modi.

There seems to be no discipline and no strategy in his approach. Very few people believe the PM is personally corrupt. It was not the sort of allegation that was to be made casually, yet it does seem to have been made in that fashion.

And so here we are, in the middle of the biggest self created crisis of this government.

A crisis which involves and includes citizens and affects the way we go about our lives.

It is a crisis that is being managed poorly by the government and, it is absolutely clear, even more shoddily by the Opposition.