News
Business
Movies
Sports
Cricket
Get Ahead
Money Tips
Shopping
Sign in  |  Create a Rediffmail account
Rediff.com  » News » How Rafale will be inducted in the IAF

The entire base must be spic and span with flags fluttering along the roads.
Everything that moves will be washed and bedecked with the best while everything that is static will be painted afresh, observes Air Commodore Nitin Sathe (retd). IMAGE: The Rafale will be part of 17 Squadron, the 'Golden Arrows', which was resurrected on September 10, 2019. Photograph: @IAF_MCC/Twitter

On July 29, the Indian Air Force received the first five of the 36 Rafale fighter jets purchased from France at a cost of 7.87 million euros.

These were inducted into the hitherto 'number plated' 17 Squadron, the 'Golden Arrows' squadron.

This squadron has seen many operations since its formation in 1951, and did yeoman service during the Kargil operations of 1999 when it was commanded by then Wing Commander Birender Singh Dhanoa who later rose to become the Chief of Air Staff.

The MiG-21 aircraft flown by this squadron slipped into history in 2011 and has been awaiting the new induction since then.

Defence Minister Rajnath Singh and his French counterpart Florence Parley will be the guests of honour at the ceremony on Thursday, September 10; the preparations for which must have begun ever since the time Ambala received the jets on July 29.

As I read about the induction ceremony planned for September 10 at Ambala, I was transported to 1989 when we received the first of the Mi-35 helicopters from the erstwhile USSR.

Good traditions in the armed forces don't change much with time, do they?

The entire base must be spic and span with flags fluttering along the roads. Everything that moves will be washed and bedecked with the best while everything that is static will be painted afresh.

The IAF station in Ambala must be on tenterhooks, with the squadron preparing for the customary flypast, the messes getting ready for the catering, the men getting their best uniforms ready and the cars getting a vacuum and wash.

It is like a marriage in the offing, quite literally. IMAGE: A water salute being given to the Rafale fighter aircraft after landing at the Indian Air Force airbase in Ambala, July 29, 2020. Photograph: ANI Photo

Amidst the excitement, there will be a traditional water gun salute.

Two fire tenders would be lined up near the taxi track awaiting the aircraft to come into the dispersal after the induction flypast, an event for which the squadron must already have practiced many times over by now.

On landing, the aircraft will taxi into the dispersal moving past the fire tenders. The water cannons will open up spraying gallons of water in a strong spray from both sides, welcoming the new induction formally into the IAF in a gate of water and mist.

This is an old marine tradition adapted by the flying fraternity for long and takes place in civil aviation too.

The men in the squadron will line up for a formal 'Guard of Honour' at the beginning of the show.

As the aircraft switches off, it will be time for an all religion prayer.

The Pandit, the Maulvi, the Granthi and a Priest will all be there attired traditionally to perform the welcome prayer and puja.

Amidst chanting, the aircraft will be blessed and wished a good operational tenure. A couple of speeches later, the Commanding officer of the Unit will be formally handed over a big 'Key' as they do in car showrooms and this will be followed by an exchange of mementoes.

All along the dispersal, the new equipment accompanying the aircraft including the weaponry will be on display for the visitors to see.

Amidst this pandemic, they will be the only witnesses along with journalists permitted to cover the event.

The dignitaries will leave after a high tea, but there will be celebrations in the offing.

The CO himself may carry out the first formal welcome brief and puja and formally take over the mantle of this sophisticated machine and the men who deal with these on the ground and in the air.

Observing all the social distancing norms, one may not see a traditional officers' mess function in the evening to celebrate the new born, but I guess, at the squadron level, the boys will surely get together for a drink, 'unofficially'! 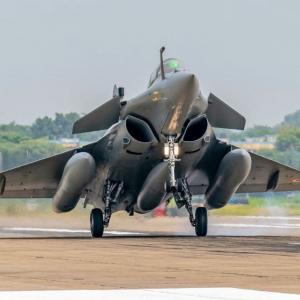