'If the National Conference and PDP make handsome electoral gains in the valley and call for the restoration of the former state's lost status, how will the rulers in Delhi respond?' asks Amulya Ganguli. 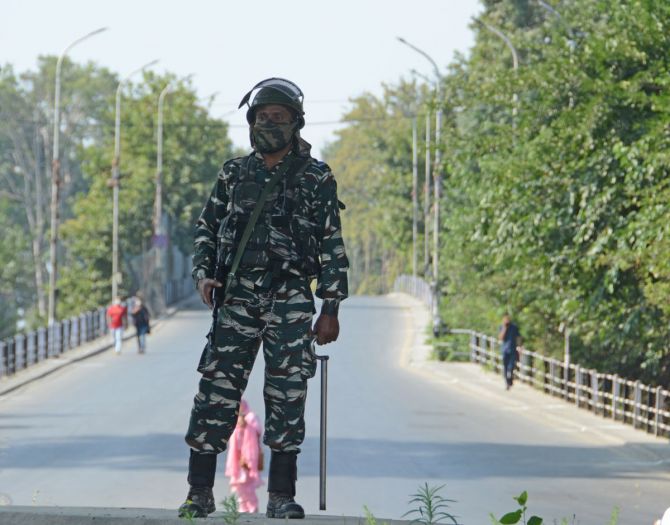 While the judiciary is taking its time in deciding on the legality of the snuffing out of Kashmir's special constitutional status by the Union government last year, some of the so-called mainstream parties of the province have spoken their mind.

But, as the BJP has said, are they day-dreaming or are they no more than a 'stray group with a hidden agenda', as several former judges, bureaucrats and personnel of the armed forces have said about the case of contempt before the Supreme court?

An election in the Union territory will clarify which of the two views are right.

But, for the moment, the ruling party at the Centre may be wondering whether it acted in haste in releasing some of the politicians of the Kashmir valley such as former chief minister Dr Farooq Abdullah.

For, what they have said on their release on the government's 'spiteful measures' in Jammu and Kashmir cannot but be disconcerting for the BJP.

Equally disturbing is their assertion about trying to restore the former state's 'unique' identity.

Up until now, no such voices were heard in the valley.

Instead, it was all peace and quiet, enabling the national security aviser to eat street food standing outside rows of shops with downed shutters and far right European politicians enjoying boat rides on the Dal lake during a conducted tour.

But, now, has the bubble burst?

Will Farooq Abdullah and Co continue to offer explanations for the hushed atmosphere by saying that the people did not come out on the streets in protest to avoid being killed?

The problem in a democracy with letting dissenters out of jail is that they cannot be kept quiet.

And once one of them speaks out, others in Kashmir and elsewhere will join in and, soon, there will be a chorus which will attract nationwide and even international attention.

Yet, they cannot be incarcerated again.

That will give the jailors a bad name.

Meanwhile, the scene in the outside world can change.

There is a possibility, for instance, of a new government assuming office in America which may be less indulgent towards India's Kashmir policy than the Trump White House. 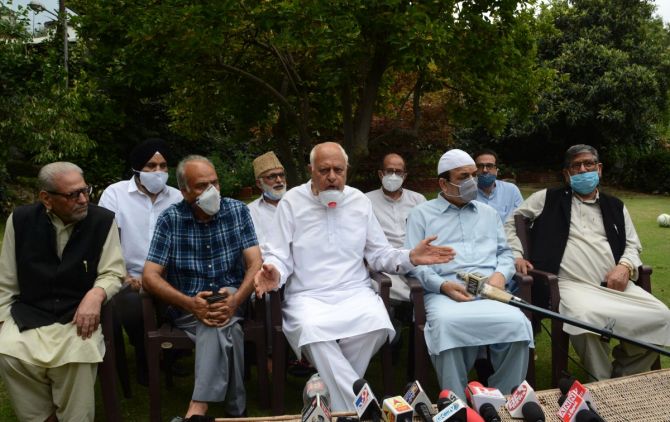 IMAGE: For the first time after the abrogation of Article 370 in Kashmir, National Conference President Dr Farooq Abdullah addresses a press conference at his residence in Srinagar. Photograph:Umar Ganie for Rediff.com

If the National Conference and the People's Democratic Party decide to bury their differences in an hour of existential crisis in Kashmir and join hands, as the joint statement issued by them and three other parties shows, the 'king's party', set up apparently with the BJP's blessings -- the Apni Party of former PDP member Altaf Bukhari -- may find the going tough.

If, as a result, the National Conference and the PDP make handsome electoral gains in the valley and call for the restoration of the former state's lost status, how will the rulers in Delhi respond even if they regard such a reversal to an earlier position 'next to impossible' ?

But a summary refusal to accept the demand of elected representatives of the people will be politically and diplomatically problematic at home and abroad.

Such a stance can induce rethinking even among parties which went along with the BJP in Parliament to abrogate Article 370 if and when the parties of the valley claim, as Farooq Abdullah has already done, that the step was taken to implement the Sangh Parivar's agenda and not the nation's.

In case the perceptions change, the BJP may realise that it has bungled in Kashmir.

Its policies were apparently based on the belief that the party's success in two successive general elections meant that it was here to stay virtually forever, ruling for half a century from parliament to the panchayats, as Union Home Minister Amit Anilchandra Shah once said.

Not only that, the BJP interpreted its electoral success as a mandate for ending 1,200 years of 'slavery' under the Mughal and the British and ushering in an Indic rule which meant the implementation of the parivar's agenda with the abrogation of Article 370 on top of the list.

But what if there are murmurs of resentment in the valley, as the statement of the five Kashmiri parties portend?

Will the Centre send back the 10,000 troops which it had recently withdrawn from the Union territory?

The BJP is apparently in something of a jam.