'Many misunderstood non-violent satyagraha as a passive strategy; it was anything but that,' notes Colonel Anil A Athale (retd). 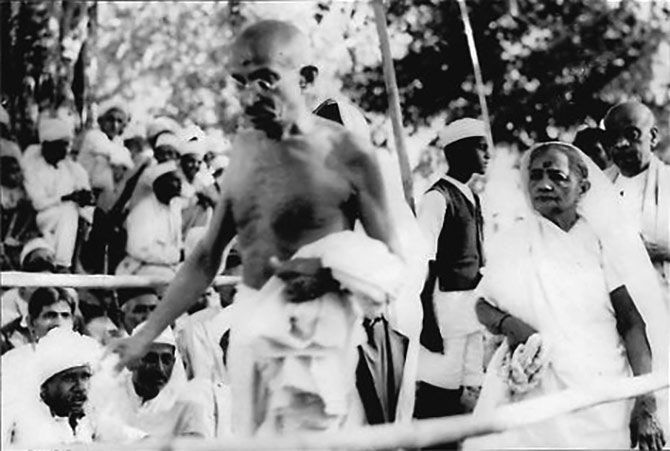 Mohandas Karamchand Gandhi, whose 150th anniversary the world celebrates today, was a many-splendoured personality. The great scientist Albert Einstein wrote: 'Generations to come will scarcely believe that such a one as this ever in flesh and blood walked upon this Earth.'

In my travels to the far corners of the world, the name Gandhi evoked admiration, even though they had never even heard of India -- the country of his origin. It is a peculiar case of a person acquiring a brand value greater than his own country.

Gandhi as a freedom fighter, practitioner of non-violent resistance and a far-sighted environmentalist are some aspects of his personality that are well-known. Volumes have been written on his philosophy and thoughts on these subjects. More than his critics, his bhaktas have done a great injustice to him by reducing him to the one-dimensional 'apostle of non-violence'.

He was much more than that. Winston Churchill, opponent of Indian freedom, saw him as a shrewd politicians out to destroy British rule.

Gandhi as a great strategist is a relatively virgin field. This is an attempt to highlight some of these aspects of his great personality.

During the peak of agricultural civilisation India had a well-established strategic tradition which dealt with threats on the economic, political, psychological and military fronts.

With the advent of industrial civilisation and the ascendancy of Europeans, Great Britain took over the political and military security of much of Asia and Africa.

After World War I, Indian leaders began to plan a strategy for freedom from colonial rule. Because they lacked military force, Indian leaders confined themselves to the non-military aspects of strategy. Thus the freedom movement adopted the non-violent satyagraha approach.

This was a skilful strategy and was able to confront British military power because of Mahatma Gandhi's outstanding moral and leadership qualities as our opponents were not ruthless and uncivilised characters.

Thomas C Schelling, the doyen of strategic studies, named the Gandhian approach as 'active' non-resistance. Many misunderstood non-violent satyagraha as a passive strategy; it was anything but that. Even his much-criticised withdrawal of the non co-operation movement after the Chauri-Chaura incident (where, on February 5, 1922, agitators burnt 24 policemen to death) was a move to exercise control.

The calibrated strategy was to deny the British an excuse to use force. Yet, the threat of large-scale violence was always at the back of mind of the rulers whenever Gandhi confronted them. This was a kind of non-violent coercion.

It is a fact that for most of the late 19th and early 20th centuries the British, just a handful in number, ruled India with Indian consent. They had built a reputation for justice and good governance. Under this umbrella, the British carried out ruthless economic exploitation of the country.

Gandhi through his mass contact programme awakened Indians to this economic injustice and his non-violent methods established moral superiority over the rulers. The images of the police beating up peaceful protesters were widely circulated and destroyed the moral legitimacy of British rule.

It is true that the same technique failed miserably against the Portuguese when within less than seven years, the Goa satyagraha of 1954 failed.

Gandhi had more than once mentioned that his methods were situation- and adversary- specific. In a classical judo principle, Gandhi used the British strength (liberalism and rule of law) against them.

Unlike his many followers he was not dogmatic about his methods. Brigadier (later Lieutenant General) L P 'Bogey' Sen recalls in his autobiography (Slender was the Thread) that when asked to go to Kashmir to take over the command of troops there in October 1947, he met Gandhi to seek advice.

He quotes Gandhi as telling him clearly that Sen must do his duty as soldier. Gandhi told him that non-violence was his personal creed and not for universal application.

Like any good strategist he was quick to spot an opportunity during the Second World War. His launch of the Quit India movement in August 1942 coincided with the lowest point for the Allies.

He was acutely concerned that should the Axis powers win (which seemed very likely in 1942) India should not find herself on the losing side. That the tide went other way was irrelevant.

His greatest and everlasting contribution is that he gave an economic and social content to the freedom struggle. For him it was not merely throwing out the British, but also about removing poverty and the practice of untouchability.

This emphasis on economic and social content made sure that independent India had a roadmap to follow.

This negated the prognosis of many political scientists, that once the glue of anti-British sentiment was removed, India would divide itself into many parts. That it did not happen is possibly the greatest tribute to Gandhi.

As a contrast, in our neighbourhood, Pakistan -- that was created on a negative sentiment of anti-Hindu feelings -- has struggled to keep itself together. Its obsession with Kashmir is a desperate attempt to keep itself afloat.

Gandhi's emphasis on need-based versus greed-based living was an ideology far ahead of its time. The enduring nature of his ideas on the cleanliness movement of 2019 (Swachch Bharat), 71 years after his death, testifies to his farsightedness.

As time passes Gandhi becomes more, not less, relevant to both India and the world.

This is my humble tribute to this great Indian Yug Purush. 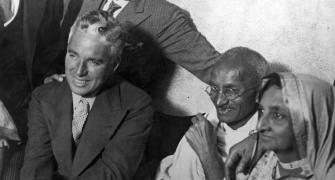 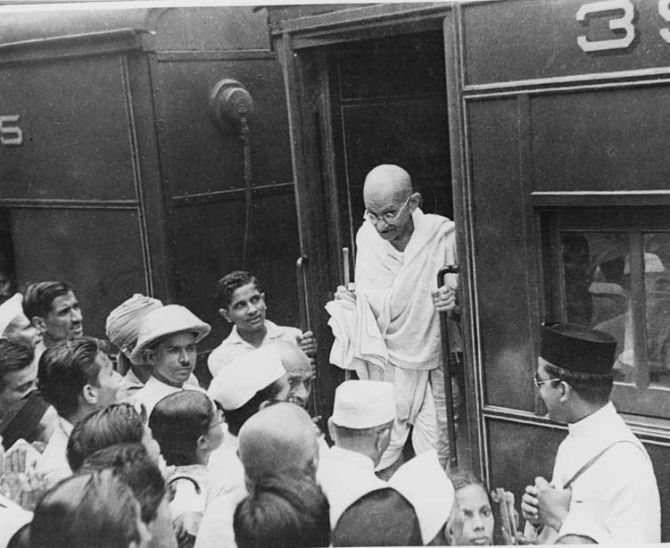