News
Business
Movies
Sports
Cricket
Get Ahead
Money Tips
Shopping
Sign in  |  Create a Rediffmail account
Rediff.com  » News » Why Gandhi can never be erased from history

Because no other leader cared for Indians as selflessly as he did -- and it all started from a remote corner at the edge of this vast country, 100 years ago.
Rediff.com's Archana Masih travels to Bhitiharwa in Champaran, Bihar, where Gandhi began his walk into history. 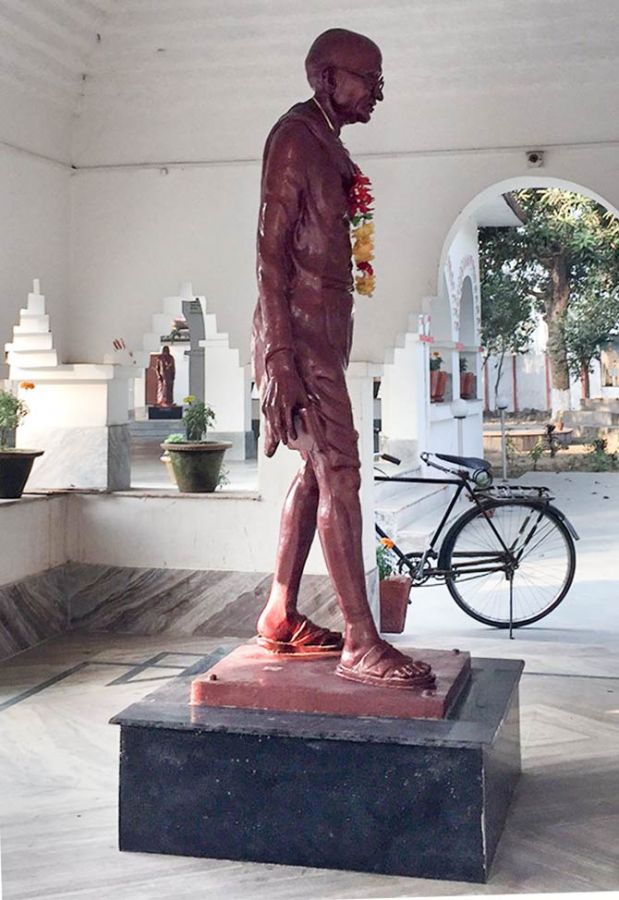 IMAGE: Gandhiji's statue is placed at the centre of the ashram under a canopy. Photographs: Archana Masih/Rediff.com

"Gandhiji must have walked this road..."

As our lone car makes its way ahead of Narkatiaganj in West Champaran, I am thinking of Gandhiji walking 16 kilometres from the station to the ashram we are headed to, a hundred years ago.

It's the sugarcane harvesting season and the road is flanked with field after field of sugarcane. The few vehicles on the road are battered tractors and trucks, overloaded beyond belief, making their way to be sold at the nearby sugar factory.

It is a beautiful countryside, raw, earthy and rural -- flaming mustard patches set against green fields; a railway line running parallel to the road across flat fields.

It is so quiet that if you stopped you could hear the wind.

Close to the border at the foothills of the Himalayas, this is closer to Nepal than to the district headquarter of Bettiah, 54 kms behind.

As the winter evening sets in, villagers have receded into their huts, and in the abounding stillness you feel as if you have really reached the edges of this vast country. 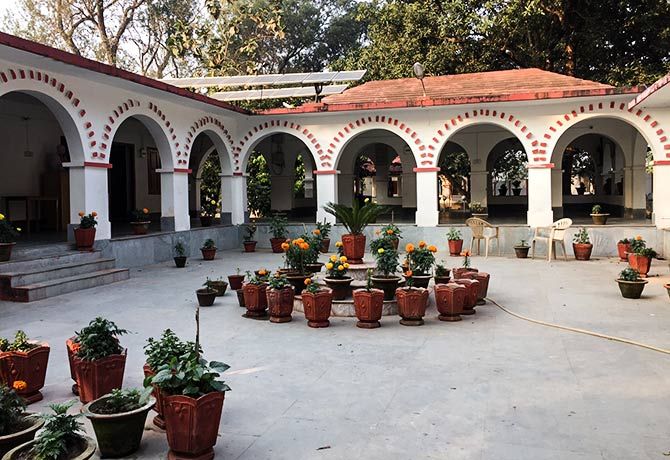 IMAGE: The ashram was started as a school in 1917 during the Champaran movement against the exploitation of peasants who worked in the indigo trade.

If I felt this now, I wonder what a wilderness it must have been when Mohandas Gandhi came calling here in April 1917, two years after he arrived in India from South Africa.

When indigo plantations must have covered vast swathes of this land, where today, sugarcane tops sway gently in the wind.

Rajkumar Shukla, an indigo farmer, had travelled to meet Gandhi at the Congress' Lucknow session in December 1916, urging him to come to Champaran to see the misery of the peasants.

Gandhi himself had no knowledge of Champaran till he arrived here four months later with Shukla and hardly knew anything about indigo plantation.

When he got off at Patna railway station from Calcutta, it was his first visit to the city and he stayed in Rajendra Prasad's home. The future President was out of town.

Unsure of his caste, and in a region that practiced strict untouchability, Gandhi was asked by the servants to use the toilet outside the house instead of the one inside.

'I had no reason to be uneasy or angry. I was hardened by such experiences. The servant was only doing his duty,' he wrote in My Experiments with Truth.

From there he made his way to Motihari in Bihar's Champaran area and went about doing something that he would become the master of -- meeting, talking, mingling with people at the margins. IMAGE: This was Gandhi's first visit to Champaran. By taking up the cause of the peasants, he was catapulted onto the national stage.

Forced into cultivating indigo under Teenkathiya -- a term still remembered by locals today -- the peasants were compelled by law to plant indigo on a portion of the land by European planters and contractors.

Indigo shrubs were grown at the cost of standing crops, destroying lives and subjecting people to exploitation and prohibitive tax rates. The dye extracted from the plant was supplied to cloth mills in Britain.

Men, women and children, who worked as indentured labour for less than ten paise a day -- the children earned three paise -- came out and spoke to Gandhi. He met them all, day after day, learning about his country as it began opening its heart to him.

He was summoned by the superintendant of police and ordered to leave the district, but the man that he was, Gandhi refused.

He documented what he heard from the farmers and sent regular reports to the British government, staying on the right side of the law.

His efforts finally resulted in the government appointing a commission and the abolishment of teenkathiya, which had existed for a century.

Rather than inciting an open rebellion against the British, Gandhi used the subtle art of political persuasion to bring about lasting change, Sandeep Bhardwaj of the Centre for Policy Research, New Delhi, noted recently in the Hindu.

This was Gandhi's first political campaign against British oppression. He went on to hone this tool of non violent resistance, accompanied by the open support of the Indian masses, and made it the motif of India's freedom movement. 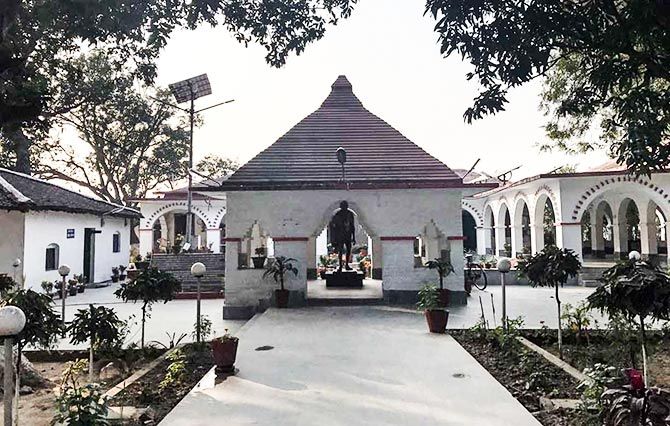 IMAGE: The Bihar government plans a big celebration on the centenary of the Champaran Satyagraha in April.

Past on open ground where children play, the road winds down to a neat and quiet ashram in Bhitiharwa, which was started as a school by Gandhiji.

It is well painted, its ground swept clean, the colours of the winter flowers standing out against the red and white walls.

The Champaran experience also revealed the abysmal poverty, education and hygiene of the people which prompted him to start the school.

It was hard to find teachers and he made a public request for volunteers, who came from as far as Bombay and South India.

Imagine a political leader in present times, starting a school in a remote village, asking his wife to be a residential teacher who not only taught but went into village huts, telling women about cleanliness.

If Swacch Bharat -- which has Gandhi's chashma as a logo -- has to succeed, our leaders need to follow Gandhi's example in action and in spirit. IMAGE: Gandhi on a bed and Nehru on the floor making thread in Delhi during a collective effort of spinning the charkha. The museum has many interesting photographs.

“This is the 100th year since Gandhiji's arrival in Chamaparan and the launch of his first satyagraha.

"Yeh pavitra bhoomi hai (this is hallowed ground)," says Anirudh Prasad Chaurasia, who lives in a nearby village and gives a tour of the ashram.

The ashram has the original school bell and Kasturba Gandhi's hand mill. A museum of photographs commemorates Gandhi's life. Neatly labeled in Hindi, some pictures are rare. Ashok trees line the boundary; there is a calmness in the air.

The Bihar government, which recently celebrated Guru Gobind Singh's 350th birth anniversary and the Kal Chakra in Bodh Gaya graced by the Dalai Lama in January, now plans a big celebration of the Champaran movement in April.

The commemoration will include special trains and padyatras on the roads Gandhi took in the vast districts of East and West Champaran.

Far as they may appear from wide city roads, these village roads are worth taking a walk with Gandhi. 'Gandhiji is a prophet for communication revolution age' 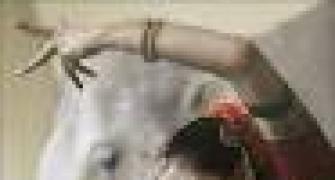 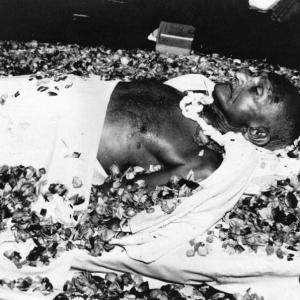