The 12-member coordination committee will have four members from each party and meet every alternate Sunday.
This committee is likely to be a more powerful decision-making body than the state government.
Sheela Bhatt reports on the tortuous negotiations to form a Shiv Sena-NCP-Congress government in Maharashtra. The delay in announcing an anti-Bharatiya Janata Party front in Maharashtra is due to the struggle in arriving at a consensus where the Congress could make the Shiv Sena less communal and the Nationalist Congress Party more transparent.

In its effort to do so, a few terms and conditions have been forwarded by the Congress party.

Plus, at other level, the NCP and Congress are trying to carve out the largest piece from the pie of power if it comes their way.

The NCP and Congress, as a Congress leader put it, are trying convert a "vegetarian wild tiger", through many rounds of consultations. They think unless the Sena is tamed, the proposed government in Mumbai cannot be stable.

Senior Congress and NCP leaders claim they have reached an agreement "in principle" to form a government along with the Shiv Sena and the announcement will be made soon.

A meeting of the Congress Working Committee, the party's highest decision-making unit, is underway to give its final approval to the ideological metamorphosis that would soon take place.

If and when a non-BJP government takes form, the Shiv Sena will get the post of chief minister, but 29-year-old Aditya Thackeray won't be CM. The top post may go to either Shiv Sena President Uddhav Thackeray or someone senior from the organisation.

In a politically thrilling development, both the NCP and Congress will join the proposed government, said leaders of both parties. The meeting between leaders of the two parties at Sharad Pawar's home in Delhi on Wednesday was fruitful, claim Congress leaders.

Pawar and his deputies have agreed that the three parties will announce a common governance agenda for Maharashtra within a week of coming into office.

This agenda will be binding on all three parties.

The Congress wanted to ensure "safeguards for the welfare of religious and linguistic minorities" in view of the Shiv Sena's political history since its founding in 1966.

While agreeing to a historic compromise by allying with the party that is further on the right than the BJP in its communal and political views, the Congress wants a written guarantee that there won't be any let-up in enforcing The Places of Worship (Special Provisions) Act 1991 so that the Shiv Sena will not raise Mathura and Kashi temple issues now that Ayodhya has been judicially settled.

The Congress and NCP want the Shiv Sena to ensure that Dalits, tribals and labour classes are also given priority.

Interestingly, the proposed government will have a 12-member coordination committee with four members from each party that will meet every alternate Sunday. This committee is likely to be a more powerful decision-making body than the government.

There will be three spokespersons from each party on the all-important coordination committee.

The most important principle on which an agreement has been reached is on taking a coordinated position after due consultations on divisive and polarising issues propagated by the BJP.

Pawar wanted to announce the three-party alliance as soon as possible to end speculation over his meeting with Prime Minister Narendra Damodardas Modi a few hours before the crucial meeting on Wednesday, claims a Congress leader.

However, as politicians are calling it an "in principle" agreement to form the government in Maharashtra, it remains risk-fraught and leaders of both the NCP and Congress claim the government will be difficult to run.

An NCP leader said, "We have inherent contradictions. However, it's necessary to give a jolt to the BJP as it is turning brazen and fascist."

The BJP, the single largest party in the Maharashtra assembly after the October 21 election, is waiting and watching the situation while claiming there is a gap between perception and reality.

A senior BJP leader, explaining the party position, claims, "Only after the wicket falls does a new batsman enters the pitch. Let's wait and watch." 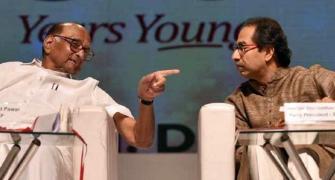 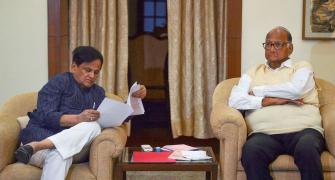